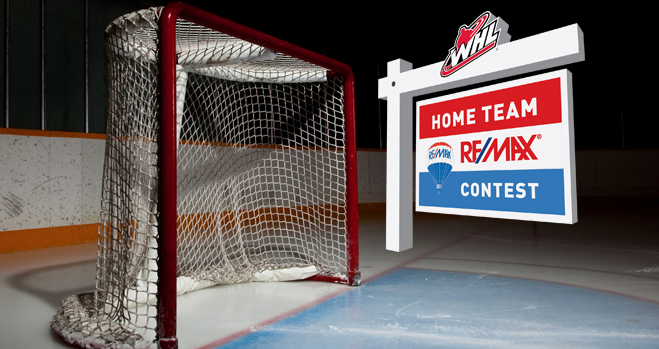 Calgary, AB – RE/MAX of Western Canada, in association with the Western Hockey League, is thrilled to once again offer fans a chance to get in on the action this season! As part of the RE/MAX Home Team Contest, local RE/MAX agents want to send you and your group to enjoy some amazing local major junior hockey action. RE/MAX is a proud supporter of the Western Hockey League and is excited to offer fans that enter a chance to win a group of 24 tickets to see their local WHL team in an upcoming game!  To enter, visit WHL.ca and click on the RE/MAX Home Team Contest button!  Compliments of your local RE/MAX agents.

RE/MAX is Canada’s leader with over 18,500 sales associates situated throughout its more than 700 independently-owned and operated offices in Canada.  The RE/MAX network, now in its 38th year, is a global real estate system operating in 80 countries, with over 6,300 independently-owned offices and over 88,500 member sales associates.  RE/MAX realtors lead the industry in professional designations, experience and production while providing real estate services in residential, commercial, referral, and asset management.  For more information, visit: www.remax.ca.

About the Western Hockey League:

The Western Hockey League started with just seven teams based in the provinces of Saskatchewan and Alberta in 1966. The WHL now has representation in all four Western Canadian provinces and the U.S. states of Oregon and Washington. The WHL consists of 22 member Clubs with 17 based in Canadian markets and 5 in the U.S. Pacific Northwest.

The WHL is a member of the Canadian Hockey League (CHL) whose membership is comprised of three major junior hockey leagues: Ontario Hockey League (OHL), Quebec Major Junior Hockey League (QMJHL) and the Western Hockey League (WHL). At the conclusion of each League’s playoffs, the CHL hosts the MasterCard Memorial Cup. A National Championship tournament involving each of the League’s Champion and the tournament host.

Should you have any questions, please contact Alyson Chambers at chambersa@whl.ca