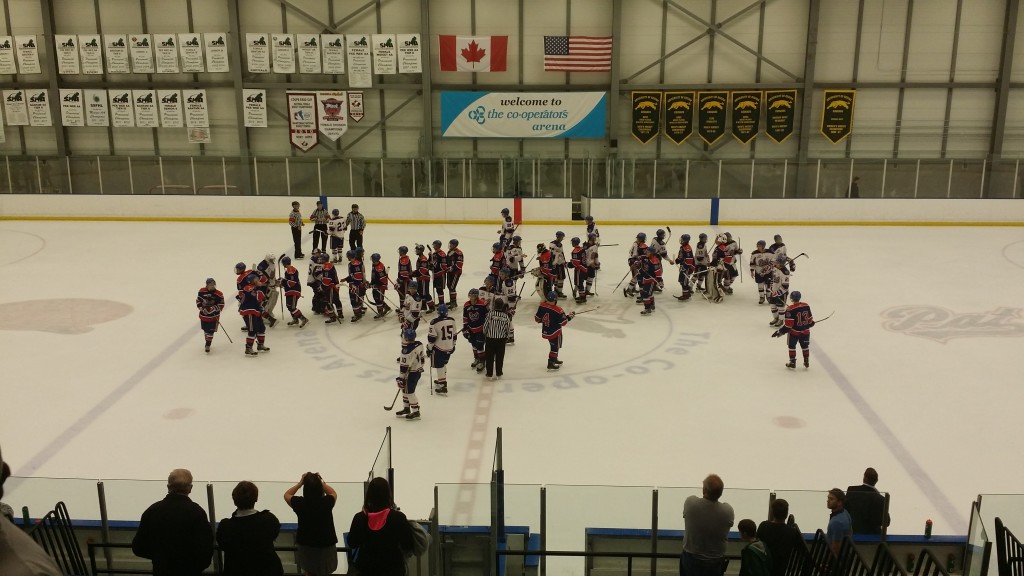 It didn’t take long for Team White to get on the board when Sam Steel got the scoring started just 49 seconds into the first period.  Connor Gay picked up the lone assist.  Team Blue found a response five minutes later when Dane Schioler walked into an Austin Wagner pass with a rocket of a slap shot, blowing it by Daniel Wapple.  The two early markers rounded out the scoring for the squads in the first period.  Shots in the opening frame favoured Blue 15-10 over White.

The first half of the second period went by without another marker, and both Daniel Wapple and Tyler Fuhr would head to the bench in favour of young goaltenders Jordan Hollett and Kurtis Chapman.  Wapple made 19 saves on 20 shots while Fuhr stopped 10 of 11.  Shortly after the switch, Steel found the back of the net again as he finished off a play from Gay and Braden Christoffer. Just when it looked as if White was headed to the third period with a 2-1 lead, Darcy DeRoose busted in off the wing and snapped a wrist shot five-hole on Hollett to tie the game with just 30 seconds left in the period.

In the final stanza it was Team Blue’s turn to get an early marker as Rykr Cole jammed the puck to the back of the net, giving the dark side its first lead of the evening.  The advantage was short-lived, though, as after Kurtis Chapman stopped a breakaway opportunity from Logan McVeigh, a pass heading back up ice hit the skate of Maximilian Kammerer and bounced back in behind the Blue goaltender to even the scoreboard 3-3.  With time dwindling, Team White regained the lead with a powerplay marker when Steel found Christoffer to the far side of the net and the over-age forward buried the go ahead strike.  Team Blue found a last burst, desperate to tie the contest and Jared McAmmond got some space before snapping a shot to the back of the net to tie the contest 4-4 and force the shootout.  Shots through sixty minutes were 37-26 in favour of Team Blue.

The shootout saw Jordan Hollett and Kurtis Chapman both turn away their first shooters before Connor Gay solved Chapman with a nice backhand over the goaltender’s pad.  Hollett then stoned Sergey Zborovsky, giving Sam Steel the chance to end the game and the rookie slid puck behind Chapman to seal the evening in favour of Team White.

Steel finished the night with three points (2G, 1A) while his linemates Connor Gay (2A) and Braden Christoffer (1G, 1A) each ended up with two points.  Team Blue spread around the scoring, featuring four goal scorers and no player with more than one point.

The Pats get a couple of days to recuperate and practice before they open the Extreme Hockey Pre-Season Tournament August 28th against the Moose Jaw Warriors at 7:00 p.m.