Wapple and Hunt Lead the Way in Pats Win over Tigers 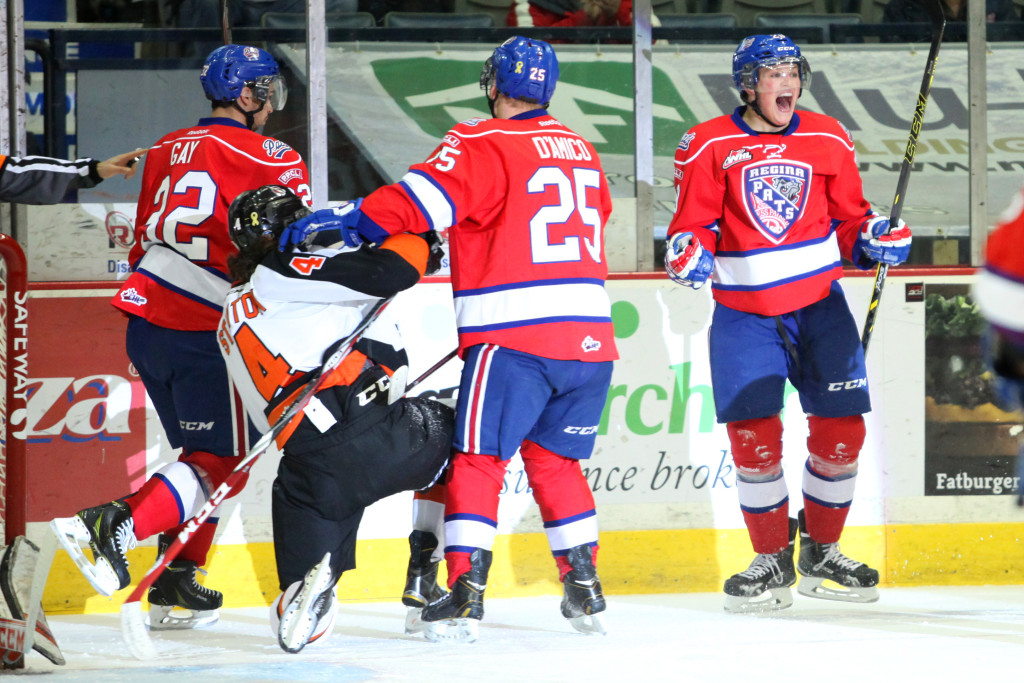 Regina, Saskatchewan – The Regina Pats (10-9-1-0) welcomed the Medicine Hat Tigers (14-4-1-0) to the Brandt Centre Friday nightand came away with their fifth win in six games on a 6-2 victory.

First Period
With two quick teams on the ice chances abounded, but Regina’s Daniel Wapple and Medicine Hat’s Nick Schneider stood tall in the early going against their former teams.  The opening goal came when forward Connor Gay grabbed the puck in his own end and went for a skate.  The Pats’ leading scorer wove his way through the neutral zone, going around some Tigers along the way.  Gay fired from the faceoff circle and snuck the puck through Schneider to give the Pats a 1-0 lead with just over seven minutes left in the frame.  The Pats held onto the lead on the strength of a late penalty kill and Wapple coming up big with the Pats being outshot 16-9 in the first period.

Second Period
Special teams were an important part of the second as the Tigers would head to the powerplay again.  After multiple chances shorthanded on the first two kills, Austin Wagner dished to Adam Brooks to spring the shifty forward and the Winnipeg product capitalized on his second breakaway goal in as many games for a 2-0 lead.  That proved key as the Tigers turned right around on the powerplay to score courtesy of a quick toe-drag and snap shot by Tommy Vannelli.  With the Pats’ second powerplay dwindling late in the frame, Colby Williams spun in the faceoff circle before sending a great feed to Dryden Hunt who pounded the puck to the back of the net after the man advantage expired for a 3-1 Pats lead after two periods.  The Blue and White came up with another key penalty kill to end the period and found themselves outshot 27-20 after forty.

Third Period
The penalties continued to flow in and the Pats found themselves in trouble, down 5-on-3.  Cole Sanford converted on the chance with a snipe from the low faceoff circle to bring the Tigers within one.  Chad Butcher had a great chance to tie the game on a breakaway, but Daniel Wapple came up with a huge stop to keep the Pats ahead.  The Pats rewarded their goaltender with some scoring as Hunt added a powerplay marker, and then made it a hat-trick on a great outside drive.  Sam Steel added another powerplay goal late in the contest and the Pats cruised to a 6-2 win despite being outshot 41-35 by the Tigers.