The Regina Pats fell 9-4 in Portland to the Winterhawks on Tuesday night.

In the first, the Winterhawks scored five times over the first 16:45 of the period to lead 5-0. The Pats got one back from Carson Denomie, his 14th at the 17:44 mark and it was a 5-1 game after the opening period. In the second, Carson Denomie scored his second of the night, 15th of the season to cut the lead to 5-2. Portland restored the four-goal lead, but Jan Cikhart got it back with his third and it was a 6-3 contest. The Hawks responded with two goals after that and led 8-3 after the second. In the third, the Hawks scored at the midway point of the third to make it 9-3. Carter Chorney rounded out the scoring in the game for the Pats, a powerplay goal at 12:30 for his fourth to make it 9-4 and that was the final.

The Pats were outshot 38-37, the powerplay was one for four and the penalty kill two for three. Carson Denomie led the offence with two goals and an assist, while Donovan Buskey made 29 saves.

What’s Next?
The Pats continue their road trip on Friday night when they visit the Seattle Thunderbirds at 9:35 p.m. Regina time on 620 CKRM. Next home game is Friday, January 24 against the Lethbridge Hurricanes. Tickets are available at reginapats.com, the Brandt Centre Box Office or at any Regina Safeway location. 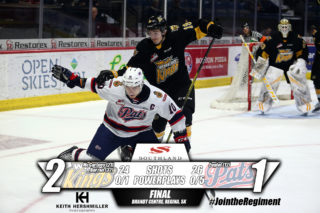 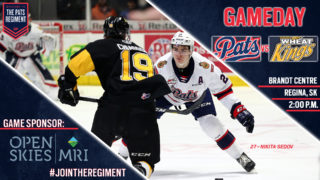