The Regina Pats Hockey Club is pleased to announce that they have signed 2019 third round pick, forward Braxton Whitehead to a Standard WHL Player Agreement. By signing in the WHL, a player is guaranteed a WHL Scholarship at his institution of choice for every year he plays in the league.

Whitehead, from Palmer, Alaska was drafted 66th overall in the third round of the 2019 WHL Bantam Draft.

“We are excited that Braxton has chosen the Pats and the WHL,” said Pats VP of Hockey Operations and General Manager John Paddock. “He is a skilled player who will be a big part of our organization in the future.”

“I am proud to skate for the city of Regina and officially join the Pats family,” said Whitehead. “It is an honor to play the sport I love for such a historic franchise, and I can’t wait to get started. After attending rookie camp last year, I knew in my heart that I wanted to ‘Join the Regiment.’ I was impressed by the coaching staff, facilities and most of all, the fans who came to watch. Without the love and support of my family, coaches, and teammates—both in Alaska and Pittsburgh—I would not be here today. Thank you to Mr. Paddock, Mr. McMullin, and the Pats organization for believing in me.”

Whitehead played the 2019-20 season with the Pittsburgh Penguins Elite 15’s where he had 20 goals and 43 points in 56 games and led his team in plus/minus.

While Whitehead will push for a roster spot as a 16-year-old in 2020-21, he is also committed to play at the Notre Dame Hockey Academy in Wilcox, SK this season.

Season tickets for the 2020-21 season are on sale now at reginapats.com. Three separate packages and payment plans are available. 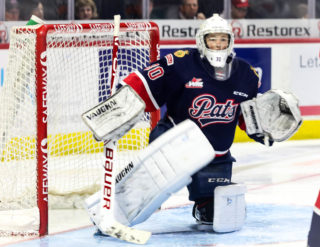