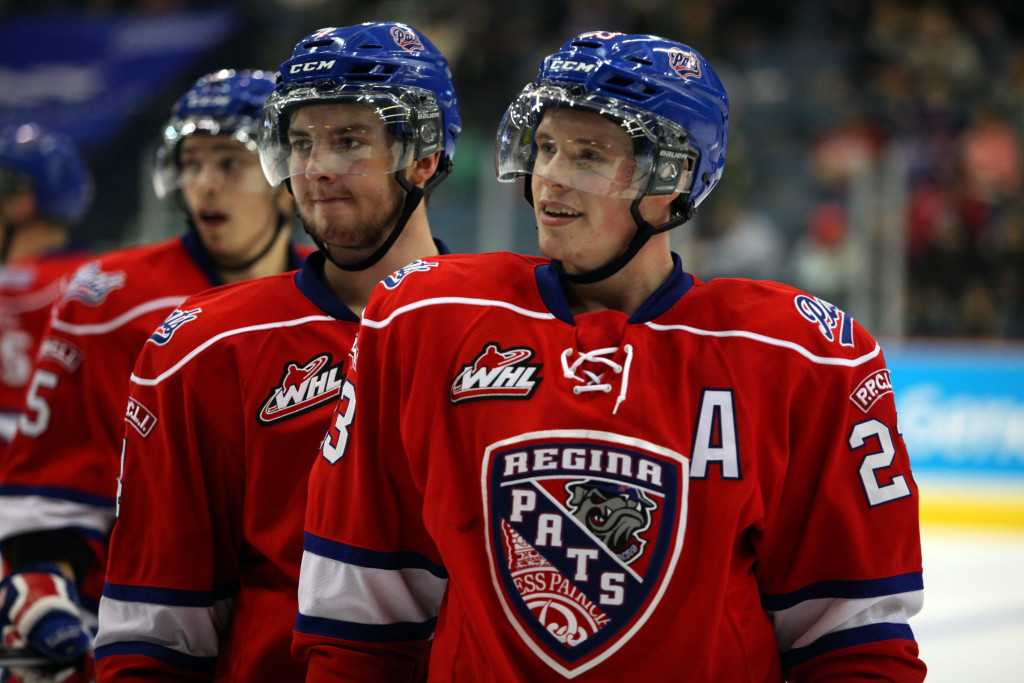 Regina, Saskatchewan – The Regina Pats (23-12-2-0) get 2015 going with a bang when they host the Moose Jaw Warriors (15-19-3-1) at the Brandt Centre for the first time this season.  Tonight’s meeting is the third of the season and the back half of a home-and-home between the teams.  The Pats have won ten straight against the Warriors including the opening two contests of the 2014-15 season.  Wednesday saw the Pats win 2-1 in OT over Moose Jaw.  Connor Gay leads the Pats with four points (3G, 1A) in two games.  Brett Howden and Dallas Valentine each have a goal.  Coming into tonight’s meeting, the Pats have won three straight while the Warriors have dropped their last six.  Listen to tonight’s contest on 620 CKRM with Home Depot Pats Hockey starting at 6:35 p.m.

Lead Up: Klimchuk Nets Winner in 2-1 Win Over Warriors
The Pats and Warriors closed out 2014 with a low scoring affair in Moose Jaw.  Dallas Valentine opened the scoring in the first period.  Adam Brooks got the equalizer in the second when he threw the puck in front and had it redirect into the net off Alexey Sleptsov’s stick.  The deadlock held until the 1:06 mark of overtime when Dryden Hunt fired a pass to the front of the net that was tipped in by Morgan Klimchuk.

Big Trade
The Pats announced today the team has acquired forward Jesse Gabrielle (’97) from the Brandon Wheat Kings in exchange for forward Morgan Klimchuk.  Gabrielle joins the Pats with 25 points (13G, 12A) in 33 games this season.  Last season, the Moosomin, SK product had 26 points (12G, 14A) in 49 contests.  Klimchuk moves on from the Pats 32nd on the team’s all-time scoring list with 217 points in 228 games. Gabrielle will be in the lineup for the Pats tonight.

Battling the Injury Bug
The Pats got through the first half of the season mostly injury free.  The second half is a different case.  Last night the Blue and White were without James Hilsendager, Chase Harrison, Sam Steel and Austin Wagner.  Wednesday night in Moose Jaw, the Pats lost Jared McAmmond to an upper body injury.  To date, Regina has lost 30 man games to injury.

WHL Debut
Pats prospect Erik Gardiner made his WHL debut Wednesday night in Moose Jaw.  The Pats’ 2nd Round pick in the 2014 WHL Bantam Draft picked up an assist for his WHL point.