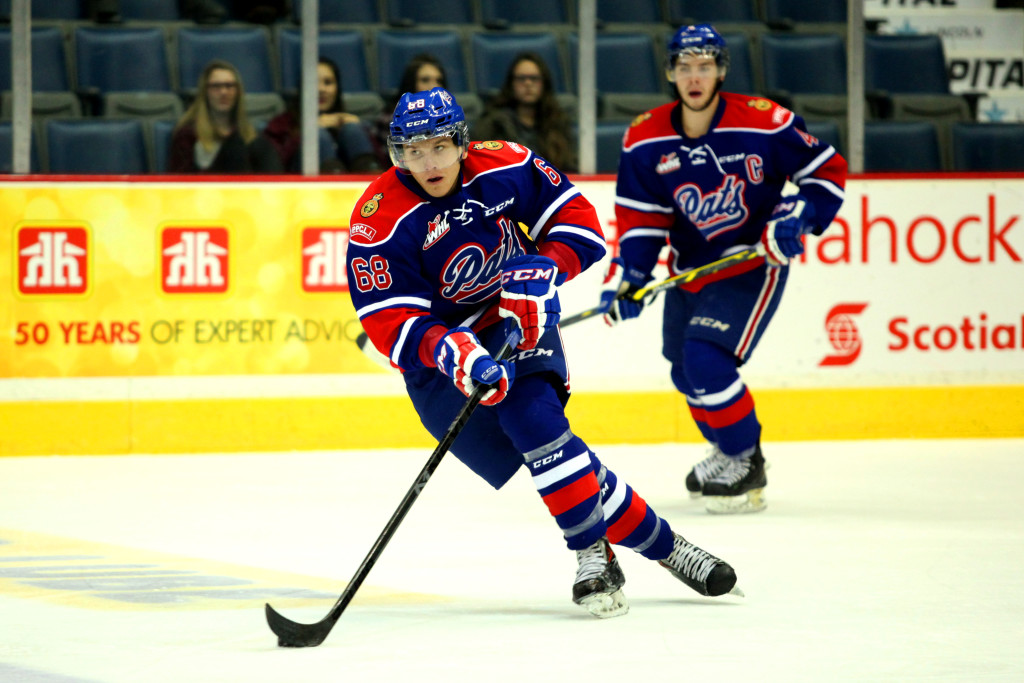 Regina, Saskatchewan – The Regina Pats (15-10-1-0) round out their 2014 B.C. road trip with their toughest test of the season so far, the CHL’s 2nd ranked club, the Kelowna Rockets (22-2-3-0).  Last season’s meetings saw the Pats jump to an early lead before the Rockets came back and eventually won 5-4 in overtime.  Colby Williams led the Pats by scoring twice.  On the other side, Tyson Baille had a goal and three assists to be the top Rocket in the contest.  The Pats come in with a 3-1-0-0 record on their road swing while the Rockets got back in the win column on Wednesday with a 4-1 win over Tri-City.  Listen to tonight’s contest on 620 CKRM with Home Depot Pats Hockey starting at 8:40 p.m. CST.

Lead Up: Hunt Assists Pats in 7-3 Win in Kamloops
It was a career night for Dryden Hunt as he tallied five assists, helping Connor Gay to his second hat-trick of the season and a 7-3 Pats win.  Jared McAmmond, Adam Brooks, Morgan Klimchuk and Pavel Padakin added single markers in the victory.  The Pats opened up a 6-0 lead before Kamloops got goals from Luke Harrison and Logan McVeigh.  Gay scored the Pats’ seventh goal and Patrik Maier rounded out the tallies.  Tyler Brown made 34 stops for his second career win.

Bucking the Trend
The Pats will attempt to do something tonight they haven’t since the 2007-08 season, beat the Kelowna Rockets.  The Blue and White’s last win against Kelowna came December 9th, 2007 in a 4-3 victory.  The Pats’ last win in Kelowna came the season before with a 3-1 win on November 24th, 2006.

Tough Road to 150
Having played as a 16 year old in the WHL, reaching the 150 games played mark took a longer for Dryden Hunt than it would for most.  For a time, it was wondered if the Nelson, B.C. product would play past his 64th game after his second concussion of the 2012-13 season.  Since returning in 2013-14, Hunt has 71 points (33G, 38A) in 86 games.  With his career high five assist night in Kamloops, Hunt sits tied with teammate Connor Gay for 15th in WHL scoring.

Waiting for News
Morgan Klimchuk will find out Monday if he has earned an invite to Hockey Canada’s World Junior Selection Camp.  Since returning from injury, Klimchuk has 18 points (9G, 9A) in 17 games.