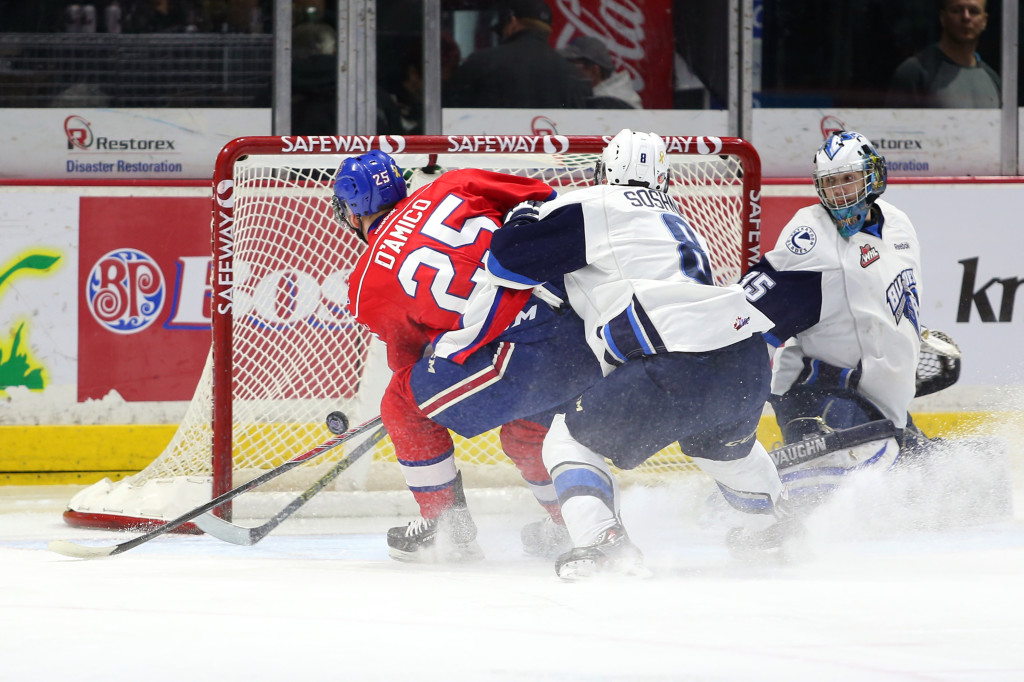 The opening minutes saw the Blades powerplay go to work for nearly six straight minutes including a full two minute five on three.  The visitors connected on the two man advantage as Brett Stovin fired a one-timer past Daniel Wapple to open the scoring.  With the goal coming on the first half of a double minor, the Blades stayed on a 5-on-3, but the Pats would kill the remainder of the penalty time.  After that point it was all Regina.  The Blue and White erased a 14-3 shot deficit to outshoot the Blades 21-15 after twenty minutes.  Along the way, the Pats tied things up as Sam Steel slid a one-handed pass in front of the net for Taylor Cooper who tucked his team leading 21st under the bar, hitting the break tied 1-1.

The home side continued the attack into the second period, but Nic Amundrud kept the Pats from grabbing the lead with save after save.  With time ticking away in the second period, the Blades regained their lead on a giveaway in the Pats zone.  The puck swung back to the point and Brycen Martin’s point shot was tipped by Cameron Hebig to give the Blades back the led through two periods.  The scale tipped heavily to the Pats on the shot clock with the Queen City Kids leading 35-22 in that regard.

The third period saw the Blades powerplay have an early chance to put a nail in the Pats’ coffin.  It didn’t go as planned when Colby Williams raced into the Blades zone and carried to almost the goal line before threading the needle to Patrick D’Amico on the far side for the tip in.  The tying goal was the Pats’ league leading 14th shorthanded marker.  Williams factored in again as the Pats took the lead 8:32 into the final frame.  The veteran defender wired a shot wide, but it skipped back off the wall and slid into the net of Amundrud’s skate.  Just under ninety seconds later, Rykr Cole added insurance when he stole the puck, skated in alone and found twine via the five-hole for a 4-2 Pats advantage.  With the home-side on a late powerplay, it was time for a milestone.  Playing an abundance of minutes in his third WHL game and looking strong in the process, under-age forward Jake Leschyshyn knocked a rebound over the goal line for the first of his career.  The Pats’ fourth goal of the final stanza rounded out the scoring in the 5-2 win.  The Pats finished up with 54 shots on goal with Daniel Wapple turning away 31 shots, earning the game’s second star in the victory.

The Blue and White return to the Brandt Centre ice Saturday night when they host Kailer Yamamoto and the Spokane Chiefs in a 7 p.m. puck drop.