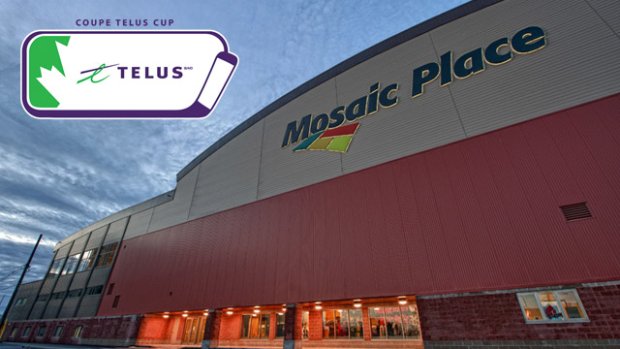 MOOSE JAW, Sask. – For the 41st time, Canada’s top Midget teams have gathered, this year in Moose Jaw, to do battle for Canada’s National Midget Championship, beginning Monday, April 21. The 2014 tournament marks just the third time Saskatchewan has played host since the inaugural Wrigley Cup in Oshawa, Ont., in 1974.

This year’s field includes one team that has previously won Canada’s National Midget Championship; the Mintos won back-to-back national titles in 2006 and 2007, and currently have the second-longest winning streak in tournament history at 14 games. While Moose Jaw and Okanagan are making their first TELUS Cup appearances, the other four teams all have national championship experience – Halifax is making its fifth appearance, Prince Albert is in for the fourth time, and Châteauguay and Toronto are each making trip No. 2.

The gold medal game will be held Sunday, April 27 at 5 p.m. ET/2 p.m. PT and will be shown on TSN/RDS, Hockey Canada’s official broadcasters (check your local listings). All preliminary round games, semifinals and the bronze medal game can be seen live via FASTHockey webcast through the game summary page at www.hockeycanada.ca/teluscup.

Athletes at the 2014 TELUS Cup will be competing not only for a national championship, but also to raise funds for local minor hockey. Every year, TELUS invests millions of dollars to support Canadian athletes throughout Saskatchewan and across the country, from the elite athletes competing for Canada on the world stage to the grassroots programs that help children get actively involved in sport. Over the course of the 19-game tournament, TELUS will donate $40 for every goal scored, up to $5,000, to the Moose Jaw Minor Hockey Association. This program will encourage teams to give it their all while giving back to the community.