Statement Made in Moose Jaw 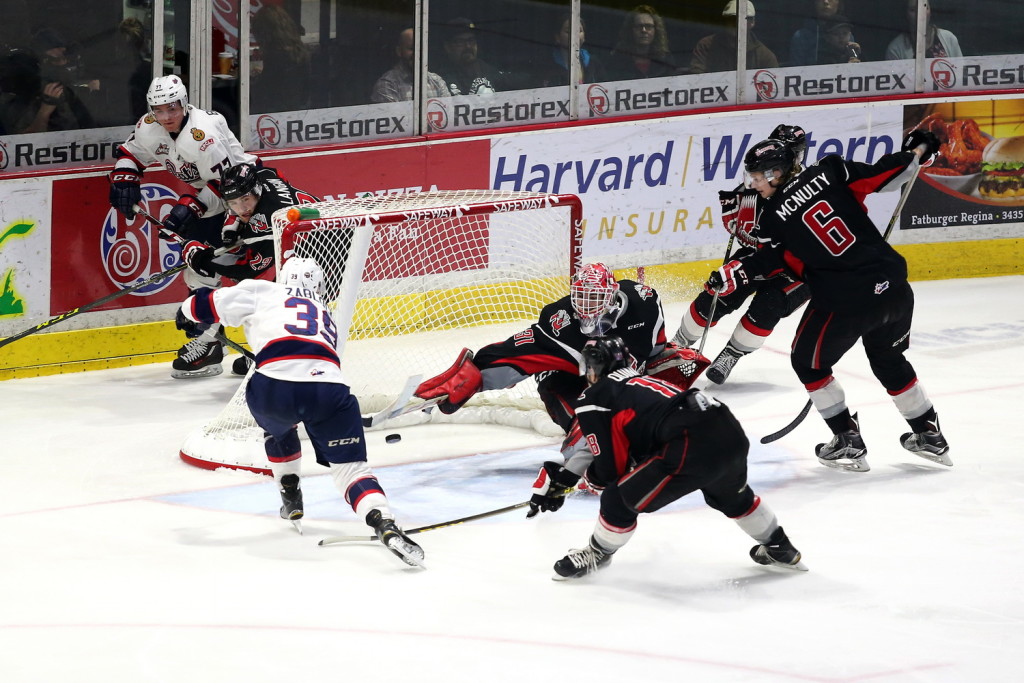 Moose Jaw, Saskatchewan – The Regina Pats (34-27-3-5) and Moose Jaw Warriors (34-26-3-5) met in the final Trans-Canada Clash game of the regular season.   The Pats rolled to a 5-1 win to move within a point of the Warriors for third in the East Division

Game Story
The Pats picked up where they left off Friday night, outshooting the Warriors 18-9 in the first period.  Special teams favoured the Pats as they opened the scoring on a Jared Freadrich powerplay goal 7:08 into the frame.  Cole Sanford followed up with his 41st of the season, also on the powerplay, at the 11:40 mark.  In the Pats goal, Jordan Hollett kept the Warriors off the board making a few big-time stops among the nine saves he made in the period.

Regina’s penalty kill impressed early with three great scoring chances to open the frame.  The best came off the stick of Adam Brooks, but his shot hit the post and stayed out of the Warriors goal.  Moose Jaw hit a post of their own when Ryan Gardiner pounded a shot off the metal behind Hollett.  That was as close as either team came to tallying in a scoreless period.

It only took 21 seconds for the Pats to break through in the third period.  Lane Zablocki skated onto a loose puck to create a two-on-oh with Austin Wagner, put the puck on his tape and Wagner potted the Pats’ third goal.  Across the midway point of the third, Adam Brooks slid a pass out front for Zablocki and he buried a shot to the top part of the net to give Regina a 4-0 lead.  The Warriors broke up Jordan Hollett’s shutout bid with less than five minutes left.  With a four-on-three powerplay and Zach Sawchenko on the bench for a two-man advantage, Noah Gregor put a cross-ice pass on the stick of Brayden Point and he potted the only Moose Jaw goal of the game.  With the net empty again, Wagner broke out of his own zone and gave the puck to Brooks who restored the four goal lead and left the score at a 5-1 count.

Quick Hits
– Adam Brooks now leads the WHL scoring race with 114 points (37G, 77A).
– Cole Sanford has goals in six straight games with eight goals over that span.
– Lane Zablocki was named the first star (1G, 2A) for the second night in a row.
– Jordan Hollett won his tenth game of the season.
– Game attendance was 4,735.

What’s Next?
The Pats are back on home ice Wednesday when they face the Saskatoon Blades in a 7 p.m. matchup.  Tickets for the game are available at Ticketmaster.ca, the Brandt Centre Box Office and Safeway locations throughout Regina.