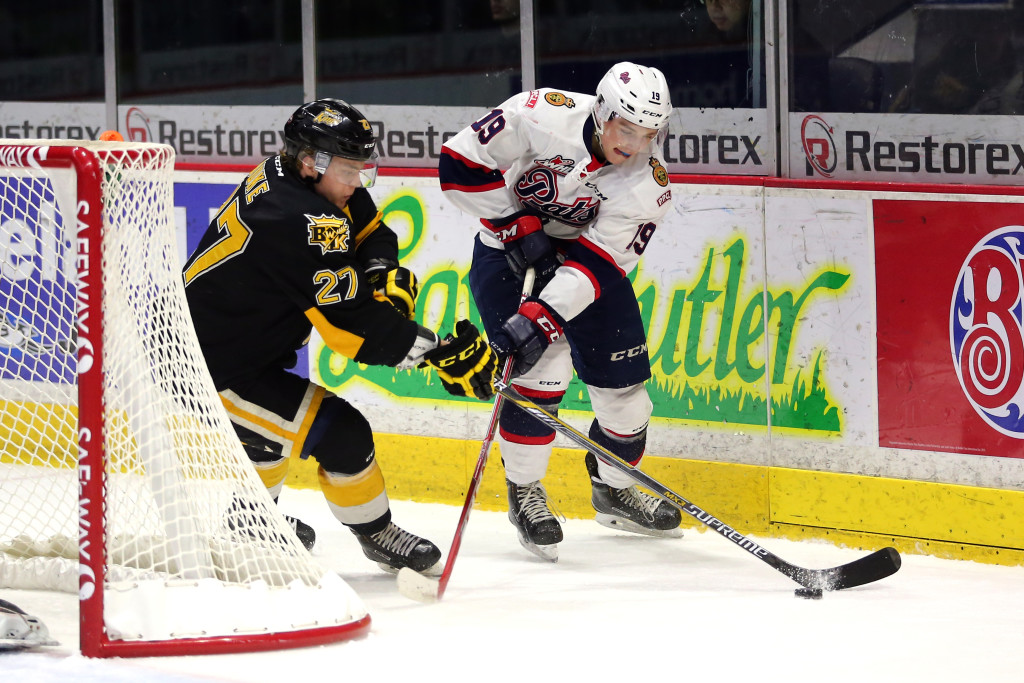 Regina, Saskatchewan – The Regina Pats (36-27-3-5) put the wraps on their regular season at Westman Place (6:30 p.m.) against the Brandon Wheat Kings. (47-18-4-2).  It’s the eighth and final meeting of the season between the clubs with the Pats holding a 2-5-0-0 against their Manitoban rivals.  Their previous matchup saw the Wheat Kings romp their way to an 8-1 win in Regina.  Adam Brooks leads the Pats with seven points (3G, 4A) against Brandon.  The Pats come into this evening’s action on a five game win streak following a 5-4 overtime win against Swift Current last night.  Tonight’s game can be heard on 620 CKRM beginning at 6:05 p.m.

The Pats seemed to have things well in hand when Sam Steel, Austin Wagner and Chase Harrison had them up 3-0 in the second.  A five minute major resulted in Swift Current getting one back before the end of the frame.  Jamal Watson and Calvin Spencer scored to tie the game in the third before Colby Sissons put the Broncos in front with 3:05 left.  That set the stage for Riley Woods to score with under a minute left to tie the game and Connor Hobbs to strike in overtime, sending the Pats to the 5-4 win.  Adam Brooks tallied five assists, bringing his season total to 120 on the year.

Adam Brooks was the big winner during last night’s end-of-year awards ceremony.  The Pats’ leading scorer took home the Pats Player of the Year, Bill Hicke Most Popular Player, Three Star Award and Torchey Schell Top Scorer trophies.  Brooks is the first player since Louis Dumont in the 1992-93 season to reach 120 points in a season.

With their win last night, the Pats took over third in the East Division (thanks to some help from the Wheat Kings).  The Blue and White hold a one point edge over the Warriors in the battle to face Prince Albert in the first round.  Tonight’s situation is this… should the Pats win, they lock up the third spot in the division.  If the Pats fall in regulation a Moose Jaw loss in overtime would result in the Pats winning the tie-breaker by virtue of more wins.  If Regina gets a point, a Moose Jaw win would regain third for the Warriors.

The Pats have wins on home ice and on the road against Brandon, but the games have been much tighter at Westman Place.  Over the three games, the Pats are a -3 goal differential with that difference all coming in the final minute of their previous visit.  Compared to their home dates against the Wheat Kings where the Pats are a -14 in goals for/against, the Blue and White may be looking forward to playing in Brandon.

Tune in to tonight’s regular season finale with Bennett Dunlop Ford Pats Hockey getting going at 6:05 p.m. CST on 620 CKRM.