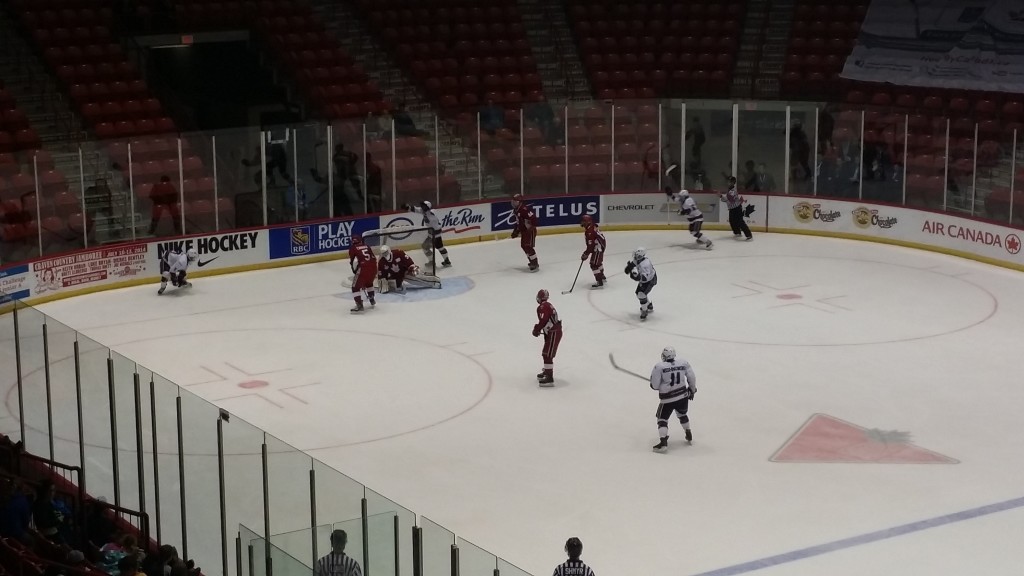 With files from BC Hockey Release (Sean Orr)

The Okanagan Rockets captured the Bronze Medal at the 2014 TELUS Cup with a 3-2 overtime win over the Toronto Young Nationals.  The 2014 TELUS Cup was held in Moose Jaw, Saskatchewan from April 21-27, 2014.  The Rockets fell to Prince Albert 6-3 in the semi-finals and failed to advance to the Gold Medal Game.

After a scoreless opening period, the Nationals jumped out to the 2-0 lead in the second period.  Entering the final period of their season, the Rockets were able to claw back into the game with goals from Linden Hora and Liam Finlay.  Finlay’s tying goal came on the powerplay with just 4:50 remaining in the third period.

“It was a set up play by our assistant coach, Braeden Pistawka,” Finlay explained to Pats play-by-play announcer Phil Andrews.  “He’s been trying to run it all year and it hadn’t worked out in a bit and finally we got it to work.”

With the scored tied at two (2), overtime was needed.  Early in the overtime frame, Hora scored his second of the game to give his squad the 3-2.  Finlay finished the tournament with ten points (5G, 5A) in seven games.

“It’s unreal.  Yesterday (6-3 loss in the Semi-Final) didn’t go as planned and it was nice to have our last game of the year be a win.”

The Okanagan Rockets defeated the reigning National Champions, the Red Deer Optimist Chiefs, in the Pacific Midget Regional Championship to advance to their first ever TELUS Cup appearance.

“(The Season) was amazing.  We knocked off teams we didn’t think we could.  I’m just proud of our guys, we all came together.”

It’s an important off-season for Finlay as he looks to take the step to either Major Junior (Regina Pats – WHL) or Junior-A (Penticton Vees – BCHL).

“I just have to keep working hard off the ice, keep training and getting better.”

This season was a valuable experience for Finlay and his teammates with the Kelowna, B.C. native taking a simple lesson from the BCMML Championship, Pacific Qualifier and Telus Cup.