Pats Tripped Up by Hitmen 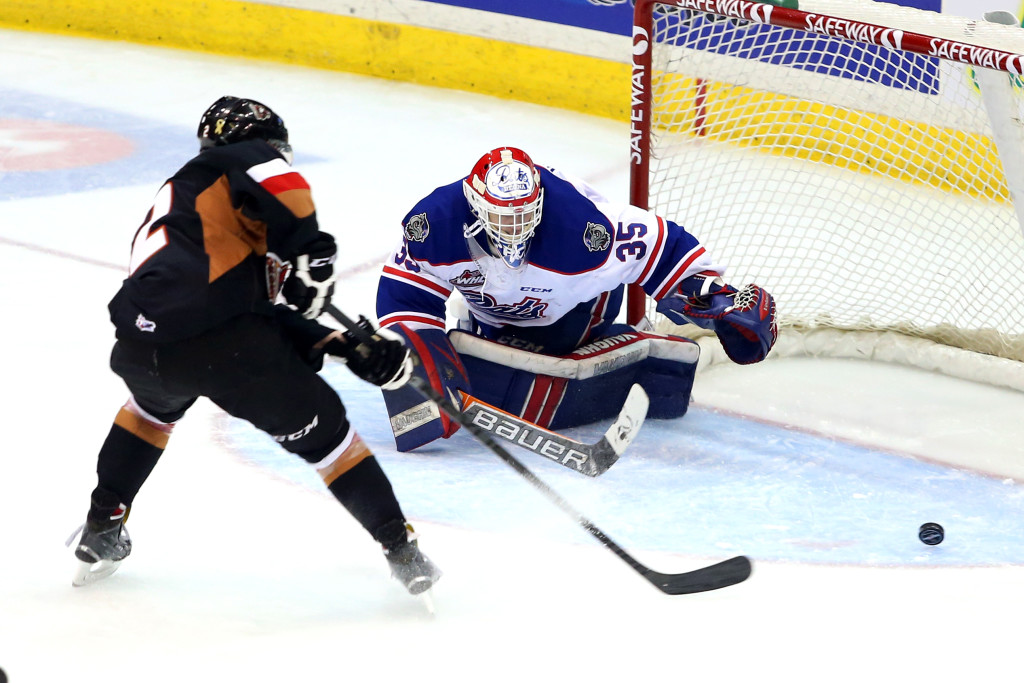 In the first, Layne Bensmiller weathered the Pats’ early storm when he crashed the net and buried the loose puck to put the Hitmen up 1-0. From there, the ice tilted in favour of the visitors, but Daniel Wapple was up to the test. The netminder rebounded after the tally and was a big in killing off the Hitmen’s first power play of the game.  Late in the opening 20 minutes, the Blue and White received a man advantage when Michael Zipp went off for hooking.  Braden Christoffer and Pavel Padakin each had a glorious chance to knot the game up, but some unfortunate bounces kept the puck out of the cage. At the end of the first stanza, Wapple stopped seven out of eight shots, while his counterpart Mack Shields denied all 12 pucks he faced.

Majority of the second period featured back-and-forth hockey with most of the offense coming off the rush.  With under a minute to go in the period, Dryden Hunt drove wide on Hitmen defensemen Travis Sanheim and lost the puck in front of Shields.  The forward never gave up on the play, though.  He regained control of the biscuit and blindly backhanded it to Connor Gay who was creeping in backdoor. From there, Gay finished off Hunt’s hard work to get the Blue and White on the board. Seventeen seconds later, Hunt wasn’t done generating offense.  The Nelson, B.C. native potted a feed from Patrick D’Amico to give the home team the lead heading into the final frame.  After 40 minutes, the Pats led on the shot clock, 22-19.

A quarter of the way into the final period, Pats defensemen Sergey Zborovskiy had his pocket picked at the Hitmen blue line by Connor Rankin.  The forward dashed down the ice and beat Wapple between his glove and body to tie the game up, 2-2.  In the latter stages of the contest, Colby Williams was assessed a 10-minute misconduct for a mouth guard violation and was forced to miss most of the remaining time. Regulation ended with the score even.  Overtime was needed with the shots 31-28 for the visitors.

The extra period solved nothing. In the shootout, Radel Fazleev’s goal was the difference maker as the Hitmen downed the Pats, 3-2, to put a blemish in the Blue and White’s recent streak.

The Pats battle the Everett Silvertips Wednesday night to mark the midway point of their five game home stand.  Puck drop is at 7:00 p.m.  Tune in with Home Depot Pats Hockey on 620 CKRM or WHL Live Web TV starting at 6:35 p.m.