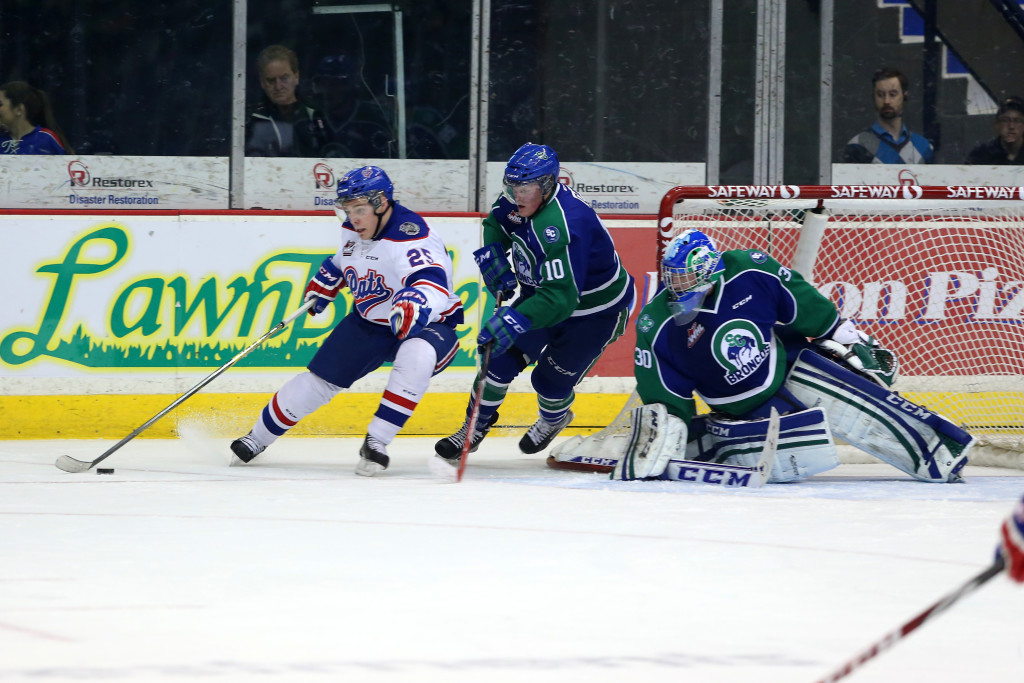 The opening minutes took on a different look from the previous night in Swift Current with the Pats peppering Landon Bow to start the contest.  Similar to Saturday, the Blue and White got on the board first when Jared McAmmond stole the puck in the offensive zone and snapped the puck by Bow just 2:23 into the contest.  After the Pats outshot the Broncos 9-1 in the early going, the Swift Current powerplay capitalized on the visitors second shot of the game.  Max Lajoie fired from the point and Colby Cave redirected the shot past Daniel Wapple, tying the game 1-1 just shy of the eleven minute mark.  It was a rough opening twenty with Patrick D’Amico/Tanner LeSann and Braden Christoffer/Ayrton Nikkel dropping the gloves in some spirited tilts.  Shots after the first sat 14-6 in favour of Regina.

In the two previous meetings between Regina and Swift Current, the second period belonged to the Broncos.  Sunday it was all Pats.  Patrick D’Amico found himself on a two-on-one when the puck hopped by Brett Lernout and D’Amico’s pass to Connor Gay bounced off Griffin Foulk into the net for a 2-1 Pats lead 4:27 into the period.  The floodgates opened from there as Dryden Hunt broke his goal drought by tallying eight minutes into the period.  Three and a half minutes later, Austin Wagner raced into the Broncos zone on a two-on-one with Pavel Padakin.  Wagner leaned into a wrist shot that overpowered Bow and flipped into the goal to open a 4-1 Regina advantage.  The scoring rounded out with Adam Brooks who danced his way around a Swift Current defender and into the slot before beating Travis Child who had checked into the game in relief of Landon Bow.  The Pats carried a 5-1 lead to the third with a 32-15 advantage on the shot clock.

The scoring slowed in the final period with just one more shot finding twine.  Rykr Cole charged in off the wing and picked the far side of the net to move the counter to 6-1 with just 1:15 left in the game.  The final seconds ticked off and the Blue and White captured their 21st win of the season while outshooting the Broncos 46-24.

The Pats gets right back into game action on the road Tuesday against the Saskatoon Blades.  Tune in with Home Depot Pats Hockey on 620 CKRM or WHL Live Web TV at 6:40 p.m.