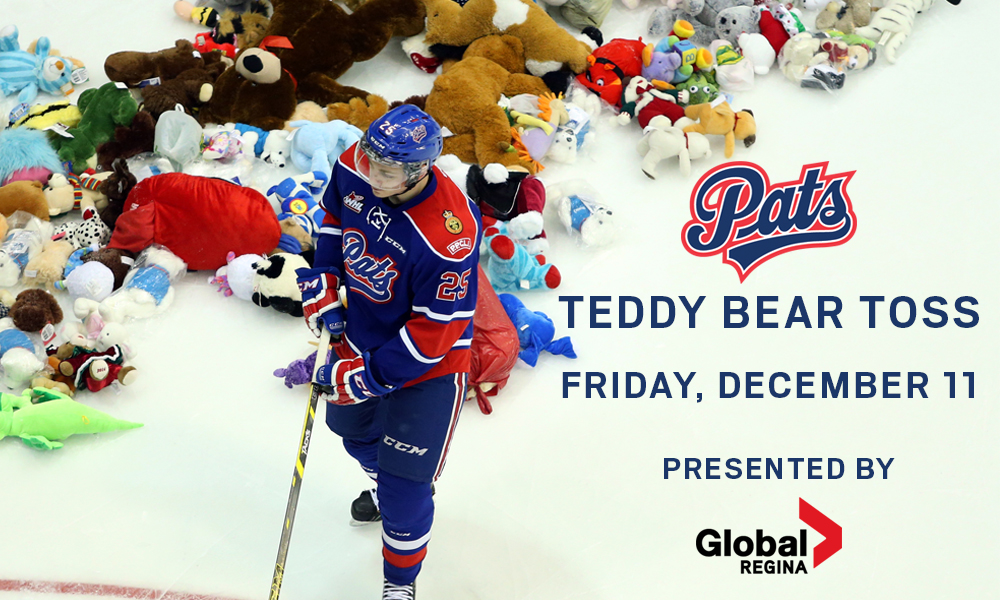 In their one and only meeting of the season, the Regina Pats (14-12-2-1) host the 2015 WHL champion Kelowna Rockets (22-6-1-0) at the Brandt Centre (7 p.m.).  Last year, the Pats downed Kelowna 3-1.  Sam Steel, Pavel Padakin and Braden Christoffer scored the goals for the Blue and White.  Daniel Wapple was the winning goaltender for the Pats.  Regina heads into tonight’s game looking to rebound after a close loss to the Calgary Hitmen (4-3) on Wednesday.  The game can be heard on 620 CKRM beginning at 6:35 p.m.

Tonight marks the Pats’ annual Teddy Bear Toss.  When the Blue and White register their first goal of the game, fans will launch plush toys down on to the ice surface.  Last season, Pats fans threw 1075 toys following Pavel Padakin scoring the third ‘teddy bear goal’ of his WHL career.  If Regina is looking for another repeat teddy bear scorer, Taylor Cooper notched the goal in Lethbridge’s Teddy Bear Toss last season.  The teddy bears will be delivered to children in Regina care centres and donated to local charities.  Fans, coming to the game, are reminded to grab a plastic bag on their way in to the arena.  The teddy bears need to be in the bags before being tossed on to the ice.

Pats Forward Aaron Macklin has a throwing tip for fans at tonight’s game.  “When you are throwing them, just lob them on there.  Throw them as hard as you can to get them out into the centre do area.”

Defenceman Connor Hobbs holds the longest current point streak for WHL defenders.  His seven game run is also tied for the third longest current point streak in the league.  Over that stretch, Hobbs has four goals and four assists for eight points.  That brings the Washington Capitals prospect to a total of 17 points (8G, 9A) in 23 games.  Hobbs is fourth on the Pats in scoring and his eight goals are tied for third among WHL defencemen.

As a rookie defenceman it can be tough to stay out of the penalty box while getting up to speed in the WHL.  Brady Pouteau has yet to spend any time in the penalty box.  He comes into tonight’s game with zero penalty minutes in 27 games.  The Oak Bluff, MB product is second on the Pats with a +8 plus/minus rating and is fourth among Pats rookies with six points (2G, 4A) on the season.

All the money donated to the Teddy Bear Toss will go to the Salvation Army.