Pats Pull Off Comeback in Brandon 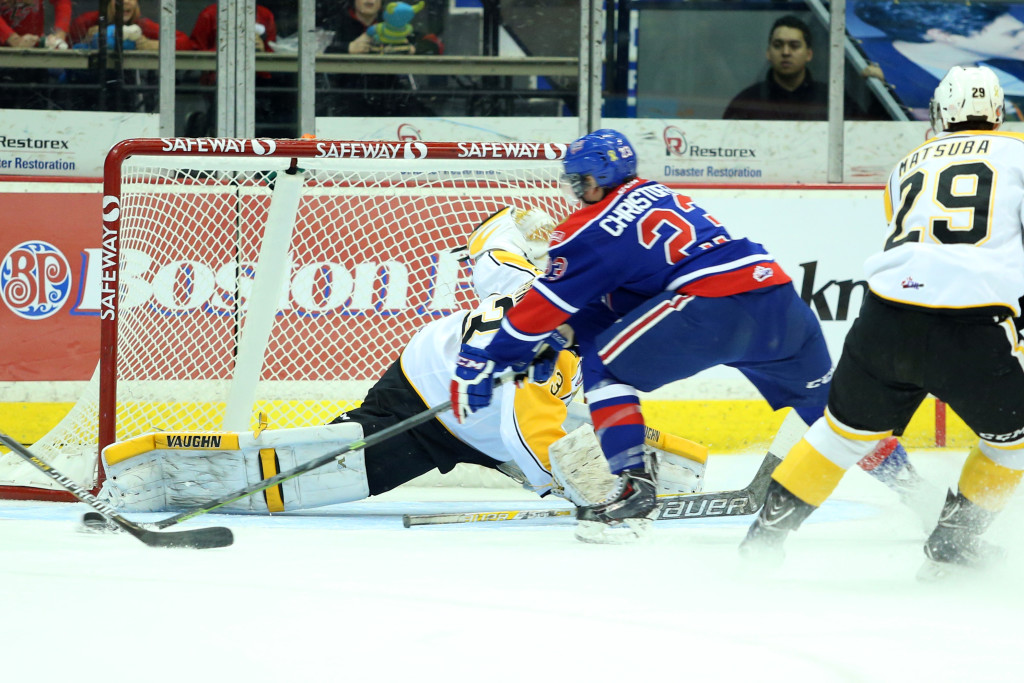 After dropping their previous two games to the Pats, the Wheat Kings wasted no time in getting on the board.  Just 33 seconds into the game, John Quenneville got some space and used it to fire the opening goal to the back of the net.  36 seconds after that, Tim McGauley stole the puck in the corner and raced out in front before dangling around a sprawling Daniel Wapple to push Brandon ahead 2-0.  Just a couple of minutes later, Morgan Klimchuk dug the puck away from Jordan Papirny and got it to Braden Christoffer.  The overager slid it into the slot for Sergey Zborovskiy who pounded it to the back of the net.  That rounded out the scoring for the first with Brandon leading 2-1 and the shots 13-6 after one.

The middle frame saw the Pats go down two men just 22 seconds into the period and the hosts capitalized.  Ryan Pilon got room to skate in from the point and pick the top corner on Wapple and put Brandon ahead 3-1.  The Pats pulled back within one just shy of the four minute mark when Sam Steel snuck a pass through to Klimchuk who beat Papirny.  Back on the powerplay, the Wheat Kings got another goal from one of the hottest players in the league.  Tim McGauley followed up on a rebound and found space around Wapple for his second of the game and to restore the two goal lead seven minutes in.  The Blue and White continued to stick close as Kyle Burroughs snapped a shot off the pad of Papirny, Pavel Padakin fought the puck free for Christoffer who potted his fourth in as many games.  The powerplay goal put the tally at 4-3 Brandon after two and the shots 27-18 for the home side.

Just four minutes into the third, the Wheat Kings restored their two goal advantage on the powerplay when Nolan Patrick tapped in a rebound four minutes into the period.  In a key penalty kill, Austin Wagner took a breakout feed from Adam Brooks and wired the puck by Papirny at the 8:28 mark.  With time running out for the Pats, they went to the powerplay and Chase Harrison’s shot directed off Patrick D’Amico’s skate to tie the game 5-5 with just three minutes left.

The Pats couldn’t capitalize on a late powerplay which carried into the extra frame, but would complete their comeback.  Dryden Hunt put Connor Gay into a shooting location in the slot and the Saskatoon native just put enough on it to get the puck over the line and send the Pats to a 6-5 OT win.  Final shots favoured the Pats 39-32 as the Blue and White won their third in a row over the Wheat Kings.  Morgan Klimchuk had a goal and two assists in his return to the Pats lineup.

The Pats play their final game before the Christmas break tomorrow night against the Lethbridge Hurricanes.  Puck drop is slated for 7 p.m.  Tickets are available at Ticketmaster.ca, the Brandt Centre Box Office and Safeway locations.