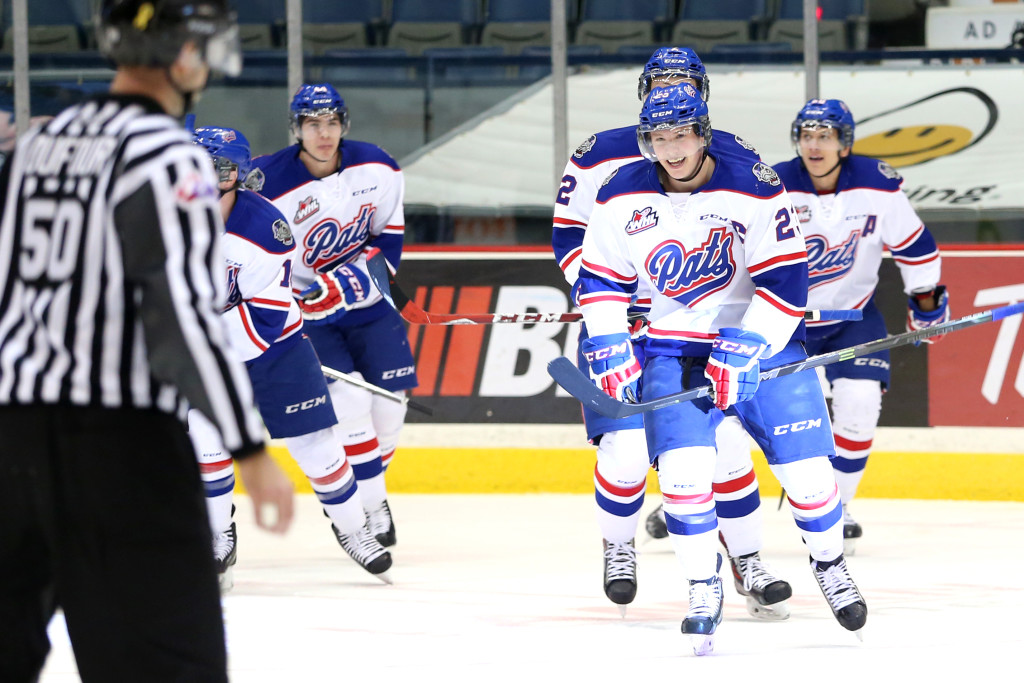 Regina, Saskatchewan – The Regina Pats (25-12-2-0) hit the ice at the Brandt Centre (7 p.m.) against the Edmonton Oil Kings (19-16-3-2) for the second time this season.  The Pats won the first meeting between the clubs in a 5-4 OT thriller.  Rykr Cole and Colby Williams each scored a goal for Regina while Lane Bauer tallied twice for Edmonton.  Coming into tonight’s game, the Pats have points in six straight games including a 3-1 win over Everett on Wednesday.   Edmonton hasn’t played in almost a week, but the Oil Kings hit Regina on a three game win streak after a 3-1 win over Kootenay on Jan. 3rd.  Listen to tonight’s contest on 620 CKRM with Home Depot Pats Hockey starting at 6:35 p.m.

Lead Up: New Look Pats Dump ‘Tips 3-1
There were plenty of new faces in the lineup Wednesday, but it was the same old Pats on the ice.  The re-vamped roster seemed to slide right back into the swing of things with newly minted captain Braden Christoffer opening the scoring on a powerplay goal.  Everett’s Nikita Scherbak evened things up with a bullet of a shot right off an offensive zone draw.  Pavel Padakin gave Regina the lead for good in the second and Jesse Gabrielle added insurance in the third.  Tyler Brown turned away 25 shots in the win.

Stepping Up
Tyler Brown didn’t have much notice that he would be the starter for Wednesday’s game.  With Daniel Wapple out of the lineup nursing a lower body injury, Brown went between the pipes against the U.S. Division leading Silvertips.  Brown earned first star honours for his 25 save performance.  In six games, the Pats’ backup tender has a 3-3-0-0 record along with a 2.47 GAA and 0.918 SV%.

Glimpse of the Future
Pats fans get their first look at newly acquired prospect Jake Leschyshyn (’99) tonight.  The 6th Overall pick in the 2014 WHL Bantam Draft became a Pat as part of the deal sending forward Connor Gay to Red Deer.  Leschyshyn leads the SMAAAHL’s Saskatoon Blazers with 25 points (10G, 15A) in 27 games.

Here to Stay
A pair of Pats defencemen got good news this week as Ryan Krushen (’98) and Nathan Mortlock (’96) learned they’ll likely remain with the Pats the remainder of the season.  Krushen was called up this week from Sherwood Park after playing three games for the Pats in various call-ups this season while Mortlock has played in eight of the Pats’ last ten games and registered his first WHL goal Jan. 2nd vs. Moose Jaw.