Pats Make it Five in a Row 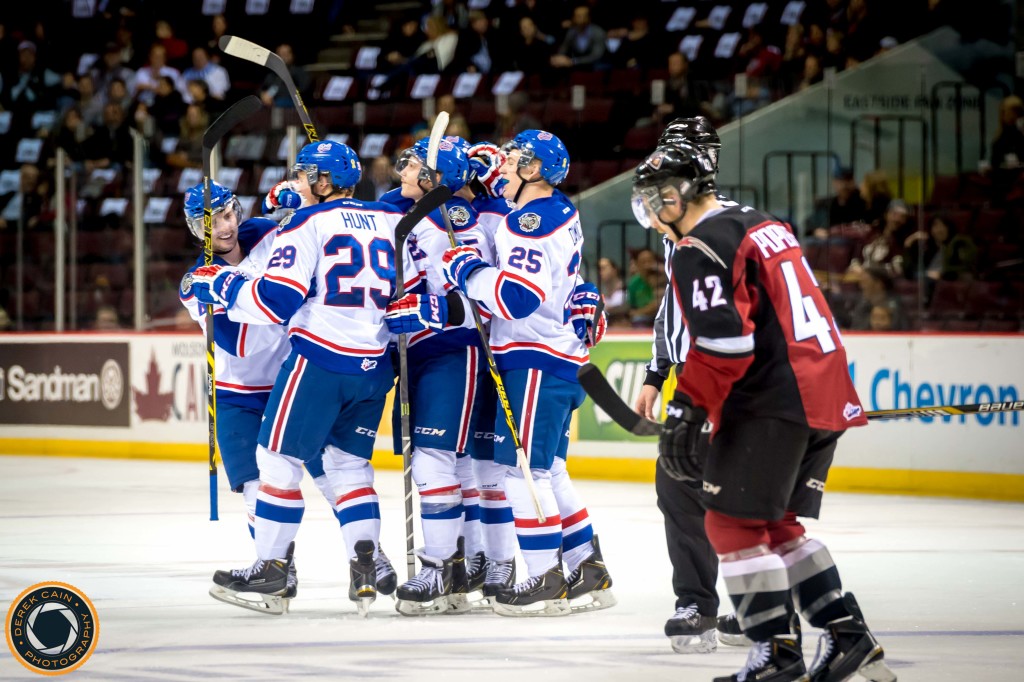 First Period
The opening minutes saw a Pats team that seemed out of sorts and the Giants pounced on the opportunity by taking an early 2-0 lead.  Just two minutes in, Matt Bellerive spied Tyler Benson alone in front of the Pats goal and the 1st Overall pick from 2013 tucked in the opening marker.  With the Giants on the powerplay, Jackson Houk took a pass and blew by the Pats at the blue line.  He fired the puck by Daniel Wapple, giving the Giants some insurance in the frame.  They would need it as the Pats collected themselves and stormed back.  It started on a lucky marker when Adam Brooks’ centering pass hit goaltender Payton Lee and skipped into the Giants goal just ahead of the ten minute mark.  As time wound down in the first, the Pats got back even.  With Patrick D’Amico battling in front, the puck hit the scrum in front and Dryden Hunt knocked the rebound in for a 2-2 tie after twenty minutes.

Second Period
The Pats kept their roll going into the middle frame and took over the lead.  Just after Chase Harrison rang a shot off the iron, Kyle Burroughs took a one-time feed and pounded the puck to the back of the goal for a powerplay marker just past the midway point of the period.  Six minutes later, Austin Wagner raced away on a breakaway and pulled the puck around backup goaltender Cody Porter for a pretty goal.  The two goal lead held up for a 4-2 Pats advantage with the shots tied 19-19 after the second.

Third Period
Already seeing how tenuous a two goal lead can be, the Giants put on early pressure in the third, but couldn’t find an answer for Daniel Wapple.  The Pats added some more insurance on a four-on-four situation.  Sergey Zborovskiy fired the puck off Porter and Connor Gay grabbed the rebound.  He turned it around across the crease with a great backhand feed to Hunt who tucked in his second of the night.  In the final minute of play, Braden Christoffer broke out of his scoring slump as he batted in a Sam Steel rebound to push the score to 6-2.  Morgan Klimchuk had an assist to move his point streak to nine games.  The final shots on goal leaned to the Pats 29-27.

The Pats are back in action tomorrow against the Victoria Royals in a 9:05 p.m. CST puck drop.  Tune in to Home Depot Pats Hockey on 620 CKRM or WHL Live Web TV.