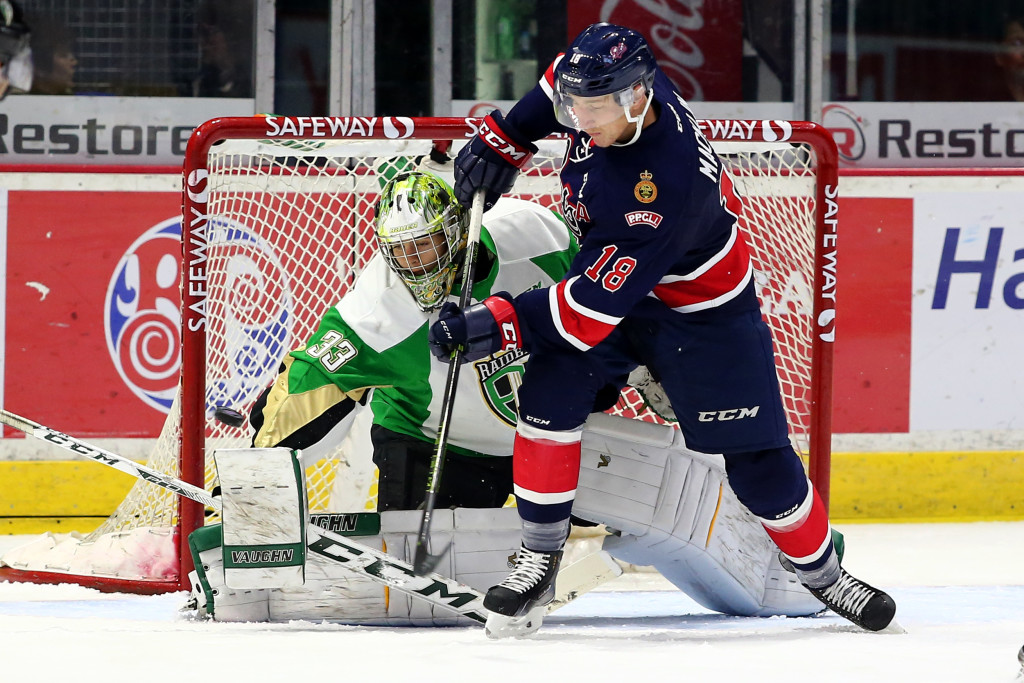 Regina, Saskatchewan – The Regina Pats (10-9-1-0) begin their road swing in earnest tonight against the Prince Albert Raiders (14-5-2-1) at the Art Hauser Centre (7 p.m.).  It’s the second meeting of the season between the Pats and Raiders.  Their previous matchup saw the Raiders collect a 2-1 overtime win in Regina.  Connor Hobbs got the lone Pats goal while Daniel Wapple was the netminder for the contest.  The Pats just came off a three game winning streak after last night’s 2-1 loss in Brandon.  Tonight’s game can be heard on 620 CKRM beginning at 6:35 p.m.

The Pats opened the scoring just over four minutes into the game, but that was all the offence they could muster.  The Wheat Kings took over from there, putting 17 shots on goal in the first, 18 in the second and 18 in the third for a 53 shot final count.  Jayce Hawryluk tied the game before the first period was out and Stelio Mattheos got the Wheat Kings ahead in the second.  They wouldn’t score another as Tyler Brown slammed the door shut, but the Pats dropped a 2-1 decision.

Goaltender Tyler Brown put forward a career night in the Pats goal yesterday in Brandon.  The Winnipeg, MB native made 51 saves, only allowing two goals.  Since taking over the Pats’ starting roll, Brown has a 2.74 goals against average, 0.931 SV% to go with a 2-3-0-0 record.  Overall, the 18-year old is 4-5-0-0 on the year with a 3.27 GAA and 0.915 SV%.  Brown gets plenty of work in the Pats net, facing 30 or more shots in 9 of his 11 starts and 40 or more in four starts.  It remains to be seen whether the Pats roll with the hot hand tonight in Brown, or if Jordan Hollett will go to give Brown a break after last night’s heavy work load.

The Pats’ penalty kill ranks 22nd in the WHL at 71.1% due to a difficult start to the season.  Over the last eight games, though, it’s been getting the job done.  The Pats have killed 22/27 disadvantages for a success rate of 81.5%.  Over that stretch, the Pats allowed multiple powerplay goals just once and haven’t allowed a powerplay goal in four of those games.

In a rare occurrence, two players on the Pats are scheduled to play their 200th Western Hockey League Game tonight.  Aaron Macklin (’95) and Adam Brooks (’96) will both reach the milestone.  Macklin has split his games between the Pats, Prince George Cougars and Kamloops Blazers while Brooks has played all 200 games for the Pats.  Brooks is the 67th player in Pats history to play 200 games for the club.

Tune in to tonight’s game with Bennett Dunlop Ford Pats Hockey on 620 CKRM.  The pre-game show gets going at 6:35 p.m.