Pats Close Out 2014 Against Warriors 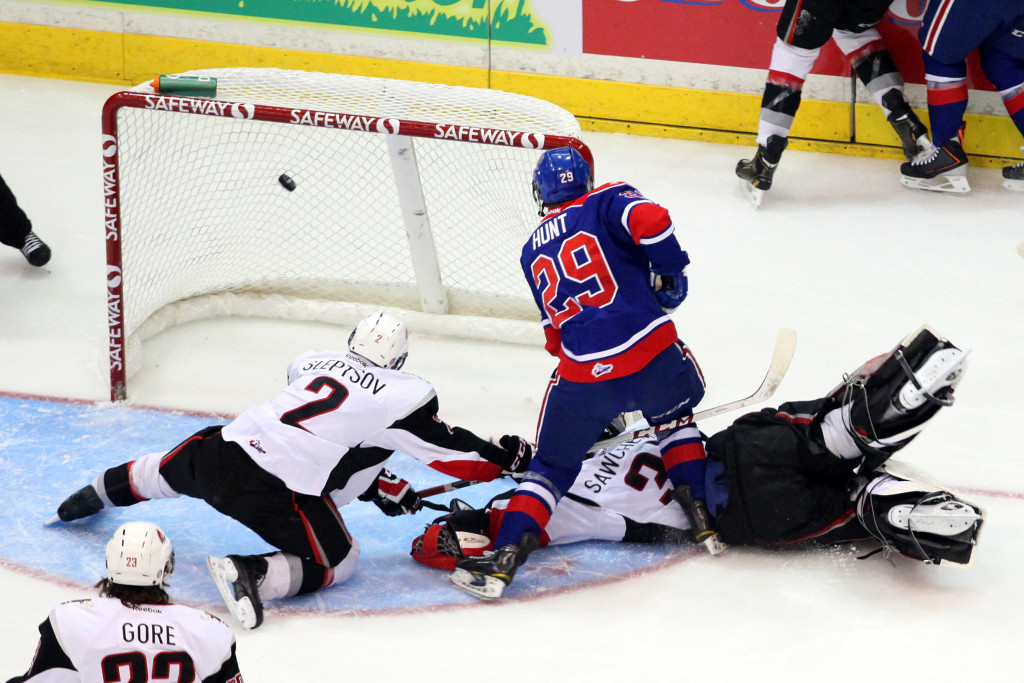 Regina, Saskatchewan – The Regina Pats (22-12-2-0) finish 2014 on the road against the Moose Jaw Warriors (15-19-2-1).  Tonight marks the second meeting between the arch-rivals this season after the Pats took the opening contest by a 7-1 score.  Connor Gay led Regina with a hat-trick and added an assist.  Brett Howden scored the Warriors’ lone goal in the game.  Coming into their latest matchup, the Pats have won two straight after last night’s 5-3 win in Saskatoon.  The Warriors have dropped five straight including Saturday’s 4-2 loss to Brandon.  Listen to tonight’s contest on 620 CKRM with Home Depot Pats Hockey starting at 6:35 p.m.

Lead Up: Pats Stun Blades 5-3
After Connor Gay opened the scoring last night in Saskatoon, the Blades came back and scored three unanswered to lead 3-1 early in the third period.  Gay cut into the lead a few minutes later, setting the stage for Morgan Klimchuk to post a natural hat-trick in a 4:30 span to lift the Blue and White to the 5-3 win.  Adam Brooks assisted on all three Klimchuk goals while Braden Christoffer and Dryden Hunt had multi-assist games.

Join the Pats on the Road
End 2014 with a bang by joining a big group of Pats fans heading to Moose Jaw for tonight’s game.  Two fan buses are on their way to Mosaic Place and there’s still room for you to come along.  Tickets are $40 and include your ticket to the game along with transportation to and from Moose Jaw.  Call the Pats Office at 306-522-7287 to reserve your seat.

Year in Review
2014 saw plenty of regular season success for the Pats highlighted by 22 wins in the first half of their current campaign.  Combining Regina’s record from the 2014 portions of the last two seasons, the Pats hold a 42-22-4-1 record in 69 games played up until tonight.  Over that time, Morgan Klimchuk was the Pats’ top scorer, putting up 74 points (31G, 43A) despite missing the ten games of the 2014-15 season.

Another Streak
After making it eleven in a row over the Blades in Saskatoon last night, the Pats look to continue another string of success against a divisional rival.  The Blue and White swept the 2013-14 season series with Moose Jaw and with their previous win 2014-15, have won nine straight games against their nemesis.

Down, Not Out
The Pats have come back from third period two goal deficits twice in their last five games.  Overall, the Pats hold a 4-11-0-0 record when trailing after two periods.  When trailing after one period of play, the Pats are actually above .500 with a 5-4-1-0 record.

Recalled
The Pats have recalled forward Erik Gardiner (’99) from the Prince Albert Mintos for tonight’s game.  Gardiner, the Pats’ 2nd Round pick in 2014, has 27 points (12G, 15A) in 27 games with the Mintos this season.  The Humboldt, SK product wrapped up the Mac’s Midget Tournament in Calgary with the Mintos yesterday.