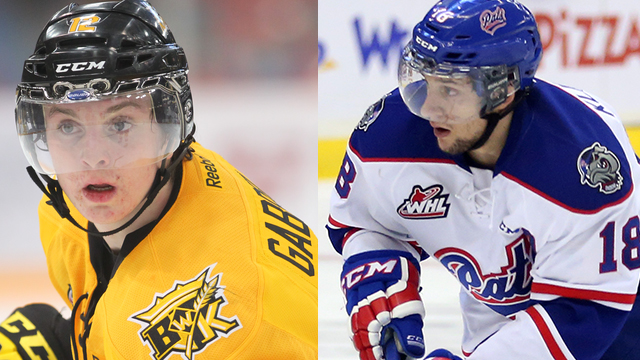 A top prospect for the 2015 NHL Entry Draft, Gabrielle joins the Pats in the midst of a breakout season.  The 6’0”, 214 lbs forward features 25 points (13G, and 12A) to go with 69 penalty minutes in 33 games with Brandon this season.  Last season, Gabrielle posted 26 points (12G, 14A) and 68 penalty minutes in 49 games.  In the 2014 playoffs, the Moosomin, SK product put up 6 points (3G, 3A) in nine games.  In November, the gritty forward was listed as a ‘B’ skater (2nd/3rd round candidate) by Central Scouting for the upcoming NHL Draft.  Internationally, Gabrielle was a member of Team West in last year’s World U17 Hockey Challenge where he had a goal, an assist and 16 penalty minutes in five games played.

“We’re happy to welcome Jesse into our organization and look forward to the skilled and hard-nosed style of play he brings to our team,” commented John Paddock.  “We’re excited to add another high end player to our current group of young players.”

Klimchuk was the Pats’ 5th Overall pick in the 2010 WHL Bantam Draft.  The Calgary, AB native made his Pats debut in 2010 and picked up an assist in his first game.  Klimchuk went on to play in 228 games in the Blue and White (34th all-time) and sits 32nd on the all-time Pats scoring list with 217 points (98G, 119A).  Klimchuk has been an alternate captain for the Pats the last two seasons while being named the Pats’ Most Sportsmanlike Player in both 2013 and 2014.  A leader on and off the ice, Klimchuk was an exemplary representative of the Pats around Regina participating in programs including Read to Succeed and Project First Goal along with numerous appearances in the community.  On the international stage, Klimchuk won a pair of U18 Gold Medals with Team Canada, twice participated in the Subway Super Series against Team Russia and was invited to this year’s World Junior Selection Camp in Toronto.  In his draft year, Klimchuk skated in the CHL Top Prospects game and was later picked 28th Overall by his hometown Calgary Flames in the 2013 NHL Entry Draft.

“It’s a tough day trading away who we consider a tremendous young man and one of the best two way players in the league,” continued Paddock.  “It’s a step the organization believes we have to make to go ahead with our future.  We thank Morgan immensely for his contribution to the team on and off the ice and I personally want to thank him for his play and the leadership he provided this year.”

Gabrielle is scheduled to be in the lineup tonight for the Pats as they faceoff with the Moose Jaw Warriors in a 7 p.m. puck drop at the Brandt Centre.  Tickets are available at Ticketmaster.ca, the Brandt Centre Box Office and Safeway locations throughout Regina.