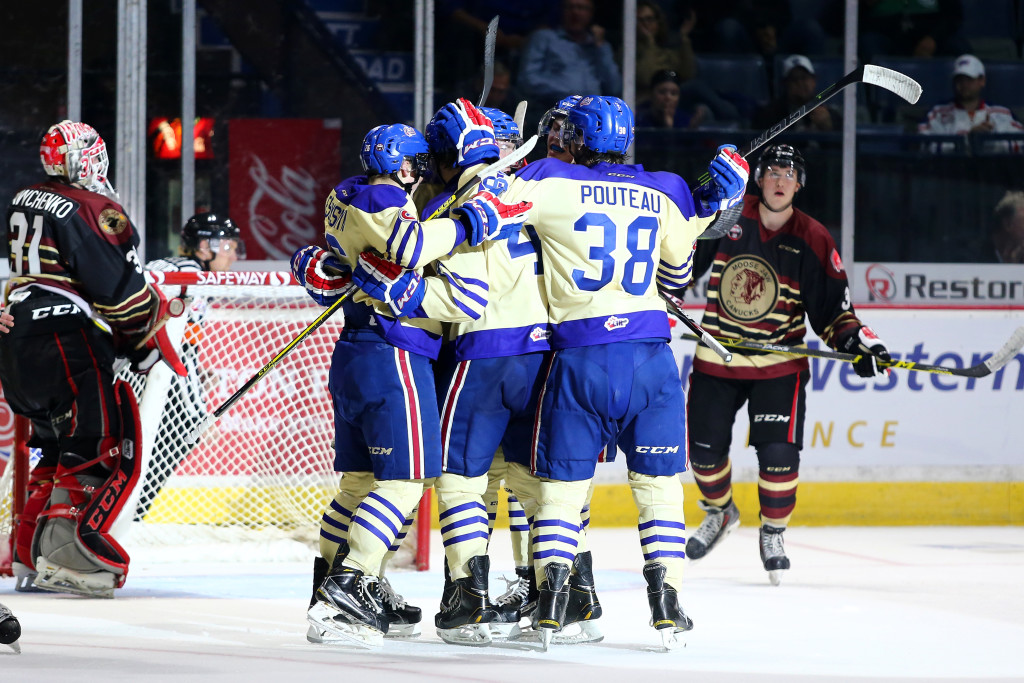 The Regina Pats (6-5-1-0) open a home-and-home against the Moose Jaw Warriors (7-3-1-1) at the Brandt Centre (7 p.m.) It’s the third meeting of the season between the clubs with the Pats holding a 1-1-0-0 record against the Warriors this season.  The previous meeting saw the Blue and White overcome the Warriors in a 3-2 overtime win.  Sam Steel leads the Pats with three points (1G, 2A) against Moose Jaw this season.  Daniel Wapple started both games on opening weekend, posting a 2.47 GAA and 0.917 SV% in those games.  The Pats are coming off a 2-1 overtime loss to Prince Albert. Tonight’s game can be heard on 620 CKRM with Bennett Dunlop Ford Pats Hockey beginning at 6:35 p.m.

Tonight is the Pats’ annual ‘Paint the Rink Pink’ night presented by Imagination Ink.  The boards and glass stanchions at the Brandt Centre have all gone pink and players will join in with pink laces and tape.  Fans can help support the cause by filling out an ‘I Fight For’ poster for a $2 donation to the Canadian Cancer Society.  Posters will be hung around the Brandt Centre to create a pink ribbon around the arena.  Click here for more details on what’s going on around the rink tonight.

A big time rivalry needs a big time way to get the latest edition going.  Gordie Johnson, from the Canadian rock group Big Sugar, performs O Canada tonight on guitar to kick off the game.

On the ice, the Pats continue to search for consistency.  After falling to 1-3-0-0 to open the year, Regina stormed back, rattling off three straight wins to climb above the .500 mark.  Since then, the Pats have alternated wins and losses for six games starting with a win in Medicine Hat and until their latest game, an overtime loss against Prince Albert.  Reaching the extra frame on Sunday, the Pats have points in two straight games for the first time since their three game win streak.

“We’re going to need to keep the pace from the Prince Albert game going to find our rythm and keep working hard against every team in the league,” said forward Jared McAmmond.  “Moose Jaw is a pretty good team, but I think we can take them.”

Moose Jaw features one of the most deadly duos in the league with Tampa Bay Lightning prospect Brayden Point and former Pats forward Dryden Hunt.  Point leads the WHL with 24 points in just ten games.  Defenceman Brady Pouteau sees that offence as an opportunity for the Pats defenders to prove themselves.

“It’s a challenge and I feel that brings out the best in the D-core.  I’m pretty sure everyone will be ready to play.”

And if rookie Pouteau finds himself up against that top unit?

“They’re a real skilled first line so if I get out there against them I just play the way I can, make simple plays then let the ‘big dogs’ get out there.”

Rookie forward Jake Leschyshyn and Assistant Coach Brad Herauf are both unavailable for the Pats tonight.  Leschyshyn is in Dawson Creek, B.C. for the World U17 Hockey Challenge as a member of Team Canada Black.  The 16-year old has three assists in eleven games this season.  Herauf is in Calgary, AB as the head coach of Team Saskatchewan at the Western Canada U16 Challenge Cup.

Tickets for tonight’s game are available online at Ticketmaster.ca, the Brandt Centre Box Office and Safeway locations throughout Regina.