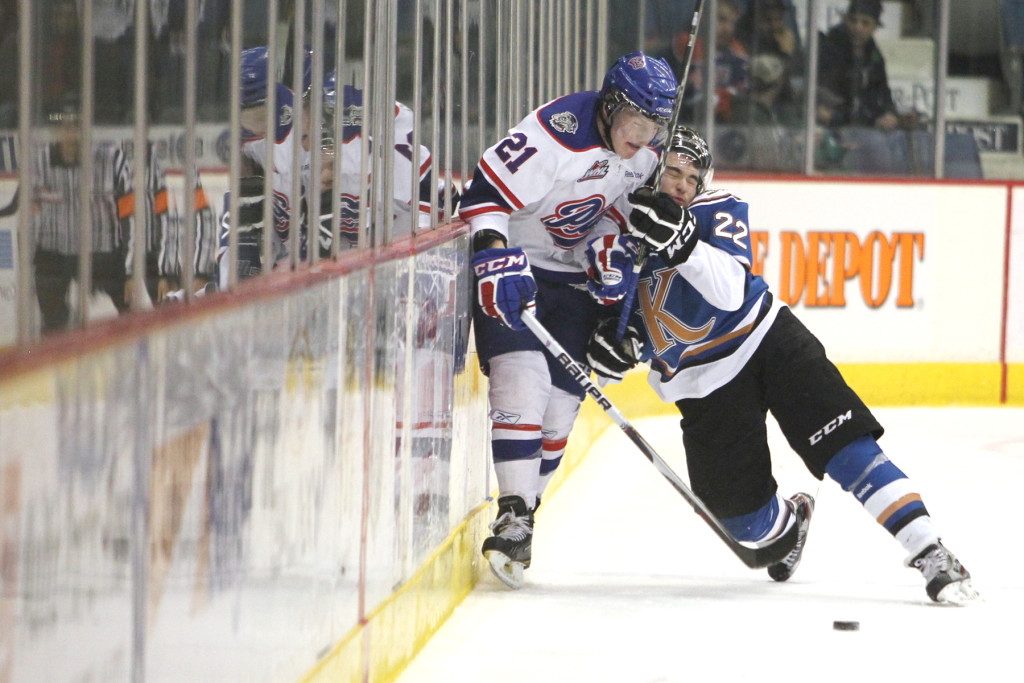 The Week That Was
Friday, September 21st – Wheat Kings 3 Pats 2
The Pats opened the Regular Season on the road in Brandon.  The Pats powerplay was clicking as it came up with two goals on the evening, courtesy of Morgan Klimchuk and Dyson Stevenson.  The Wheat Kings, though, were equally efficient with two powerplay goals of their own.  The difference ended up being one even strength goal scored by Taylor Cooper when he broke in all alone after Quintin Lissoway blocked a shot in the Brandon Zone.

Saturday, September 22nd – Wheat Kings 7 Pats 4
Looking for revenge the next night in their own Home Opener, the Pats jumped to an early lead when Trent Ouellette came streaking out of the penalty box to finish a great feed from Lane Scheidl.  Regina and Brandon then traded goals into the second period where Adam Brooks scored his first WHL goal on Ty McLean’s first WHL assist.  The Wheat Kings took over from there, though, with four in the second and cruised to the 7-4 win to spoil the party at the Brandt Centre.  Alessio Bertaggia was the stand out for Brandon with a three point night.

The Moves Continue
With significant injuries to two forwards (Dryden Hunt, Patrick D’Amico), Chad Lang added some depth up front in acquiring Adam Rossignol from the Swift Current Broncos.  It looks like a pretty good deal, sending a conditional twelfth round pick the other way as Rossignol picked up an assist in his second game and was a key point in the Pats offence on Friday.

Quote of the Week
“Almost to a man we just played soft, too much stick checking, soft plays, not getting the puck deep, not finishing our checks. Our defencemen were not even looking to play one on one (and) battle hard out of the corner. They’re just hoping and hoping and hoping we get it out. Our forwards (were causing) turnovers in the neutral zone going to the middle (instead of chipping it deep along the boards).” – Head Coach Pat Conacher on the Pats play Saturday
(Courtesy Greg Harder – Leader Post)

The Week Ahead
Wednesday, September 26th – Pats @ Swift Current
The Pats get on the bus for their first real road trip of the 2012-13 Season.  The swing starts in Swift Current when the Pats take on the Broncos for the first time this season.  The Broncos picked up three points on Opening Weekend with a 4-3 OT loss on the road to Moose Jaw, followed with Swift Current beating down the Warriors 7-1.

Friday, September 28th – Pats @ Kootenay
Like the Pats, the Ice came out of their opening weekend with a pair of losses to the Oil Kings and Hitmen.  Kootenay doesn’t play again until its home opener so the Pats will need to bring their best to spoil the party in Cranbrook.

Saturday, September 29th – Pats @ Medicine Hat
The Tigers split their first games of the season and will play another before hosting the Pats.  Medicine Hat visits Red Deer the night before the Pats arrive for their final game of the road trip.

Season Tickets Still Available
The Home Opener may be past, but season tickets are still available.  You can be at every Regina Pats home game for as low as eight dollars a ticket.  For more information, call 522-PATS or visit ReginaPats.com.