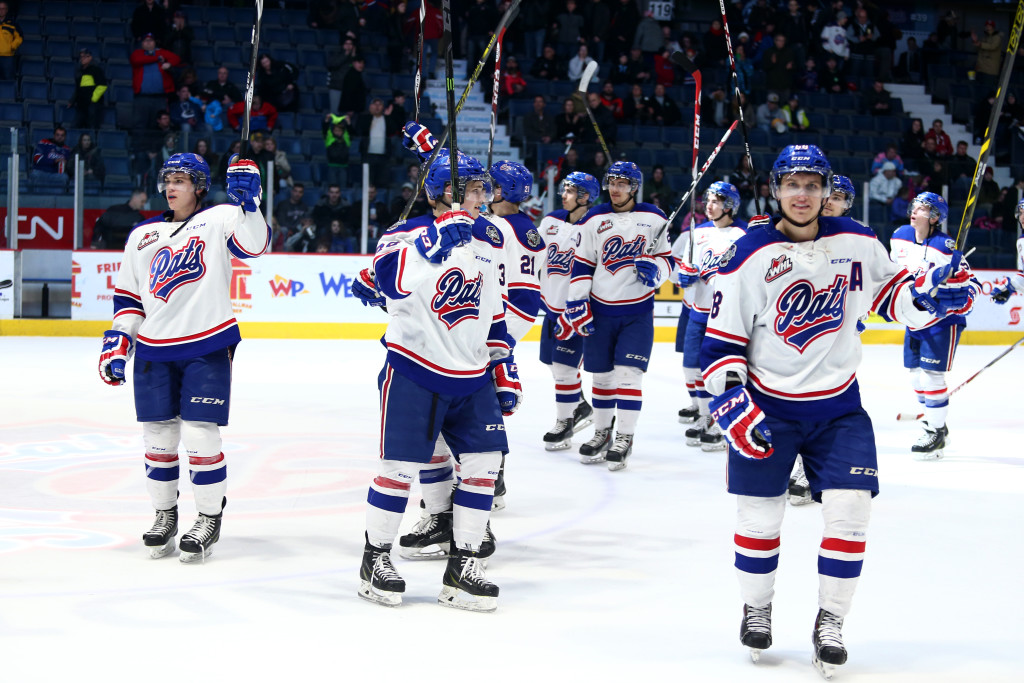 The Week That Was
The Pats battled through a very busy schedule, closing out a seven game in ten day segment this week.  Wednesday saw the Blue and White look to continue a three game win streak against Kootenay.  The game started well for the Pats with a 2-0 lead after one, but the Ice came back in the second to tie the game 3-3 and take the lead in the third.  With time winding down, Connor Hobbs found a tying goal to force overtime and a shootout, but the Ice would capture the 5-4 win.  Kyle Burroughs and Dryden Hunt made their return to the Brandt Centre Friday night.  Tigers defender Ty Stanton scored twice in the middle period to set Medicine Hat up for the win.  Taylor Cooper scored with 90 seconds left in the third to make things interesting, and Adam Brooks almost tied it up when he hit both posts.  The Pats couldn’t find a tying marker after that and fell 2-1.  With two chances to clinch a playoff spot against Moose Jaw, the Pats and Warriors went back and forth Saturday night before the Warriors were able to hold out for a 6-5 win in overtime.  Adam Brooks had a career night, scoring his first WHL hat-trick and adding an assist in the loss.  The following evening, the Pats successfully clinched a spot in the 2015 WHL Playoffs with a 6-2 win in the back-half of the home-and-home against the Warriors.

The Week Ahead
Friday,March 6th – Pats at Edmonton (8:00 p.m. CST)
The Pats take on the reigning champs for the final time this season as they travel to Edmonton to start a weekend Central Division swing.  The Oil Kings are in a battle to hold onto playoff positioning as the Pats look to solidify their hold on 2nd in the East.  Don’t miss any of the action with the Pats on the road by tuning into Home Depot Pats Hockey on 620 CKRM or WHL Live Web TV.

Saturday, March 7th – Pats at Red Deer (8:00 p.m.)
After battling the 2014 Memorial Cup Champions, the Pats head to Red Deer to face off against the 2016 Memorial Cup Host Rebels.  The Blue and White are 1-1-1-0 against the Rebels this season, winning the last meeting between the teams by a 4-1 score.

Training for Life Dinner
The Regina Pats are pleased to partner with Special Olympics Saskatchewan for the upcoming annual Training for Life Dinner Tuesday, March 3rd at the Double Tree by Hilton.  Pats Head Coach and Sr. VP of Hockey Operations, John Paddock, will be the keynote speaker and members of the team will be in attendance to sign autographs and take photos with attendees.  Tickets are $50 and include a Pats game voucher!  Visit the Pats Office or specialolympics.sk.ca to purchase tickets.

Playoff Packages
The Pats have earned their spot in the 2015 WHL Playoffs!  Season Ticket Holders can expect their Playoff Ticket Packages to begin arriving early this week, if they haven’t already.  If yours doesn’t arrive by the end of the week, contact Kellin Enslev at 306-337-1538 to get your playoff information.

March 13th Fan Bus to Moose Jaw
Don’t miss out on the excitement as the Pats open a home-and-home with the Moose Jaw Warriors Friday, March 13th.  Get your tickets for the Pats Fan Bus and cheer on the Blue and White on the road against their arch-rivals in one of their final games against the Warriors of the 2014-15 Regular Season.