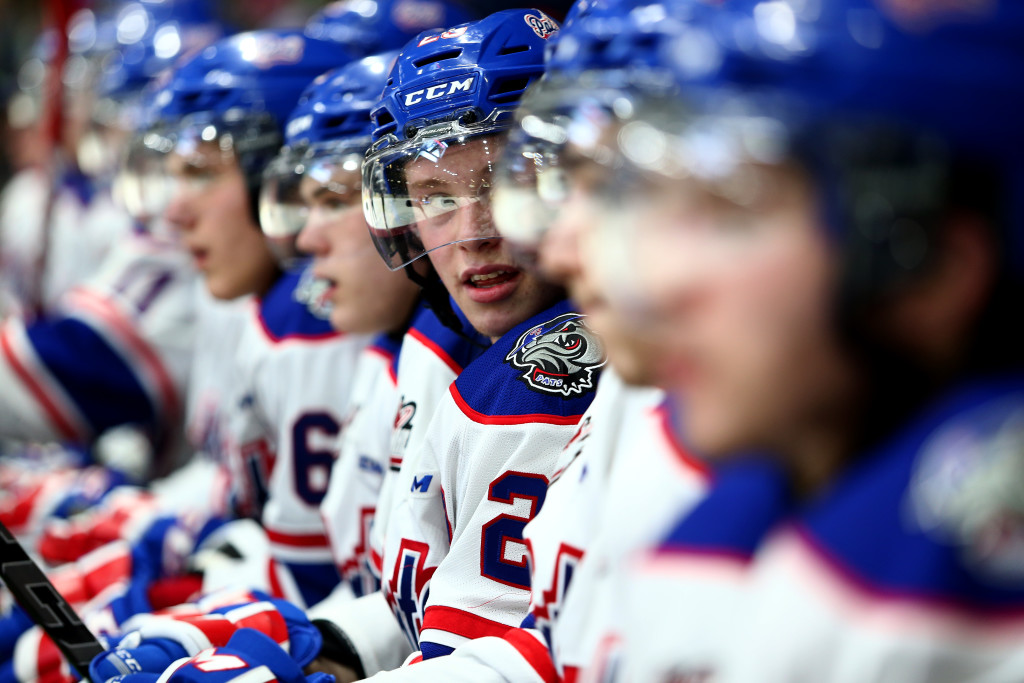 The Week That Was
It was a packed week for the Blue and White as they faced off against three potential first round opponents.  The Pats opened in Prince Albert Tuesday and peppered the Raiders’ net with 58 shots, but were stifled by goaltender Nick McBride who turned away all but 55 of their attempts.  The Raiders used McBride’s heroics to build a 4-0 lead and held off a Regina comeback to win 5-3.  The Pats were without Sam Steel, Austin Wagner and Braden Christoffer in Swift Current the next night, but backup goaltender Tyler Brown stole the show early.  His strong play between the pipes and a full team effort lifted the Queen City Kids to a 4-1 win over the Broncos.  The weekend saw the Trans-Canada Clash reached its climax when the Pats and Warriors split a home and home by winning in each other’s rinks.  Regina erased a 3-0 deficit in the first period and overcame a controversial disallowed goal to win 4-3 in Moose Jaw on Friday.  The following evening saw the Warriors swipe away a 2-0 disadvantage before dropping the Pats 4-3 in the shootout to keep their playoff hopes alive.

The Week Ahead
Tuesday,March 16th – Pats vs. Brandon (7:00 p.m.)
Tomorrow brings Morgan Klimchuk and the Brandon Wheat Kings to town on St. Patrick’s Day!  The Pats revive their St. Pat’s jerseys for the contest which will be sold in a combined silent/live auction.  Place your bids in the silent auction, but be in attendance midway through the second intermission to place your final bids in the brief live auction on each jersey.  Courtesy of Western Pizza, the first 2,500 fans in attendance can pick up a 2014-15 Regina Pats Team Poster at the doors.

Friday, March 20th – Pats vs. Prince Albert (7:00 p.m.)
It’s Fan Appreciation and Awards Night presented by 620 CKRM and the Sportscage.  The Pats present their end of season individual awards prior to the game, so be in your seat early.  Fans should be ready for plenty of prize giveaways including 620 CKRM and the Sportscage $1,000 giveaway at the end of the night.  You have to be in your seat to win so be sure to stay all the way to the final buzzer.

Saturday, March 21st – Pats at Prince Albert (7:00 p.m.)
The regular season comes to a close with the Pats on the road in Prince Albert.  The Raiders may be on the outside of the playoff picture, but are a tough test on any night.  Tune in as the Pats put the wraps on a great regular season on 620 CKRM or WHL Live Web TV starting at 6:35 p.m.

Playoff Packages
The Regina Pats open the WHL Playoffs March 27th and 28th on home ice.  While they wait for their opponent to solidify positioning, fans can guarantee their seats for the post-season.  Don’t be left on the outside looking in, visit or call the Pats Office to purchase your Pats Playoff Ticket Package today!  Individual Playoff Tickets for Games One and Two are available at Ticketmaster.ca.