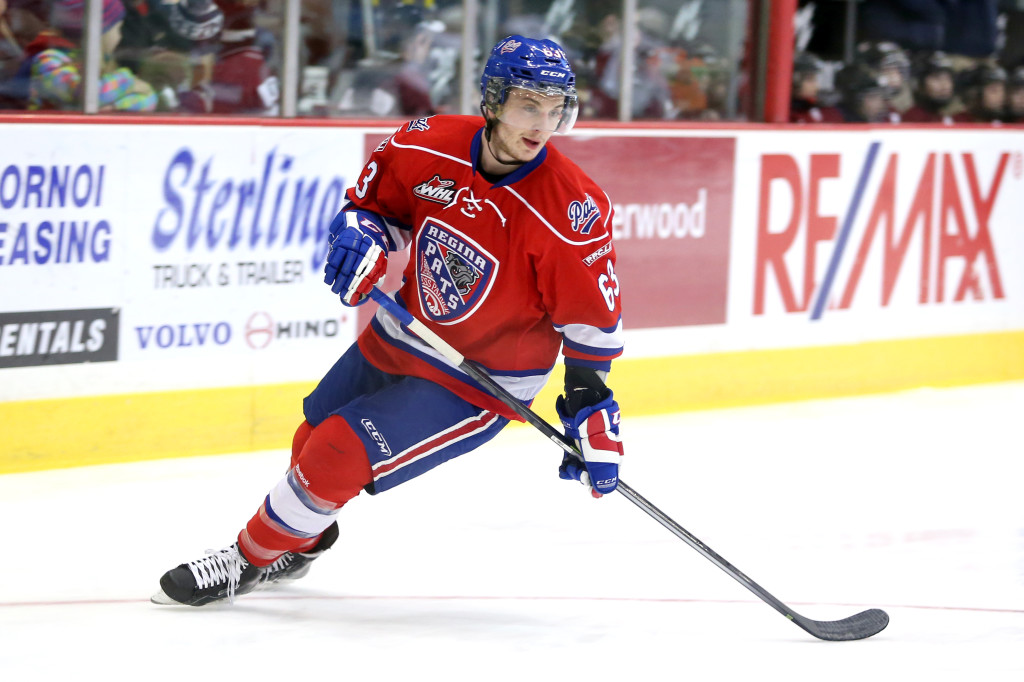 The Week That Was
A tough schedule following the Christmas break continued for the Pats as they played four games through the week.  It started up in Saskatoon where Morgan Klimchuk scored a natural hat-trick in the third period to send the Pats to a 5-3 victory over the Blades.  He followed that performance up by scoring the overtime winner in a 2-1 Pats win in Moose Jaw.  That game would prove to be Klimchuk’s last in a Pats uniform.  The Blue and White made it four straight wins when they swept the home and home with the Warriors on the back of a 6-4 victory.  Pavel Padakin’s shorthanded marker was the winner in that contest.  The week ended Sunday against the Calgary with Dryden Hunt and Connor Gay each registering a goal and an assist in their final games as Pats.  The Queen City Kids came up short, though, in a 2-1 shootout loss to the Hitmen.

The Trades
The Pats took centre stage in the WHL, shaping their team for the future by trading 19 year olds Morgan Klimchuk, Kyle Burroughs, Dryden Hunt and Connor Gay in recent days.  With the movement, the Pats injected talented youth into their lineup with Jesse Gabrielle, Connor Hobbs and Jake Leschyshyn all joining the organization.  Gabrielle has already made his Pats debut while Hobbs suits up in the Blue and White for the first time come Wednesday.  Leschyshyn is a 15 year old prospect who is eligible to play five games for the Pats this season until his Midget AAA season comes to an end.

The Week Ahead
Wednesday, January 7th – Pats vs. Everett (7:00 p.m.)
It’s the lone meeting of the season between the Pats and Everett Silvertips as Nikita Scherbak and crew pass through Regina.  Don’t worry about dinner as it’s Wiener Wednesday at the Brandt Centre and Concessions will be serving 2-for-1 hot dogs all evening.

Friday,January 9th – Pats vs. Edmonton (7:00 p.m.)
After their previous thrilling meeting, the Pats and Oil Kings go head-to-head on a Red Friday for the Pats.  The squads have split their first two games of the season series with both winning on home ice.

Saturday, January 10th – Pats vs. Prince Albert (7:00 p.m.)
The Pats have been the busiest team in the league heading toward the WHL Trade Deadline, which other teams will be making moves to change things up?  The Prince Albert Raiders made major deal before Christmas and visit the Brandt Centre hours after the deadline has passed.

Outdoor Hockey League Equipment Drive
January 10th marks the WHL Trade Deadline, so bring in your old hockey equipment and trade it in for a great deal!  The Outdoor Hockey League will have bins on the concourse ready to accept old hockey gear in exchange for 2-for-1 ticket vouchers to upcoming Pats games.  So bring in your old gear and help kids enjoy the great game of hockey!

Second Half Season Tickets
Don’t miss a second of the action on the ice in the second half of the season with the Pats’ new Second Half Season Ticket.  Purchase yours before January 15th and be in the stands for all the game changing moments still to come this season and enjoy the new fan experience coming in 2015.  For more information, contact Kellin Enslev in the Pats Office at 306-337-1538 or visit ReginaPats.com.