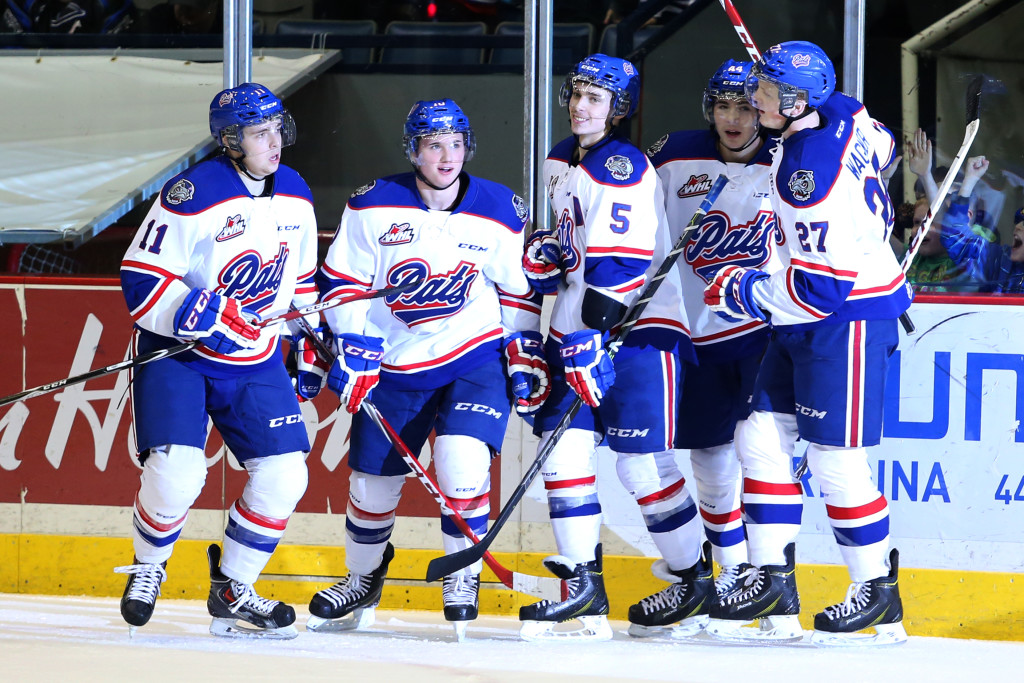 The Week That Was
A busy week saw the new-look Pats face off against three teams with mixed results.  As the team looked to build chemistry, the Blue and White picked up a key win against the U.S. Division leading Everett Silvertips.  Tyler Brown stepped between the pipes for an injured Daniel Wapple and was named the first star in a 3-1 victory against the Silvertips.  Jesse Gabrielle picked up his first goal as a Pat in the win.  Friday brought the Oil Kings and goaltender Tristan Jarry to town.  The Pittsburgh Penguins netminder made 36 saves as the Pats fell by a 4-1 count.  The week ended with a wild affair as the Pats and Raiders posted seven goals in just the first period of Saturday’s game.  The Raiders held a 6-3 lead going into the third, but saw the Pats roar back with two late markers only to come up short in a 6-5 loss.  Taylor Cooper scored his first as a Pat, then added two more for the hat-trick plus an assist in the loss.

Friday,January 16th – Pats at Edmonton (8:00 p.m. CST)
For the second time in a week, the Pats meet up with the Edmonton Oil Kings.  The Blue and White look for a way to solve Tristan Jarry after being mostly unsuccessful in that endeavor last week.  It’s the Pats’ first visit to Rexall Place this season.

Saturday, January 17th – Pats at Red Deer (8:00 p.m.)
Another familiar face suits up in new colours against the Blue and White.  Connor Gay plays his first game against his old teammates when the Pats head to Red Deer to take on the 2016 Memorial Cup hosts.

Sunday, January 18th – Pats at Calgary (5:00 p.m. CST)
A tough trip comes to an end with an early matchup in Calgary.  The Pats finish a four games in five nights run against Jake Virtanen and the Hitmen.  The Queen City kids are looking for their first win against Calgary this season.

Packed House
The Brandt Centre will be packed to the rafters for the Pats’ next home game January 23rd.  One way to get into the game is with the purchase of Second Half Season Tickets (see below).  Can’t get your hands on tickets for the game?  The new fan experience continues February 3rd when the Pats are back at the Brandt Centre to kick off a busy month on home ice.

Second Half Season Tickets and Voucher Pack Deadline
Don’t miss a second of the action on the ice in the second half of the season with the Pats’ new Second Half Season Ticket.  Purchase yours before January 15th and be in the stands for all the game changing moments still to come this season and enjoy the new fan experience starting January 23rd.

January 15th is also the deadline to purchase Voucher Packs for the remainder of the 2014-15 Regular Season.  If a Half-Season Ticket isn’t your thing, a Voucher Pack is the best way to get a discount on the games you don’t want to miss!  For more information, contact Kellin Enslev in the Pats Office at 306-337-1538 or visit ReginaPats.com.