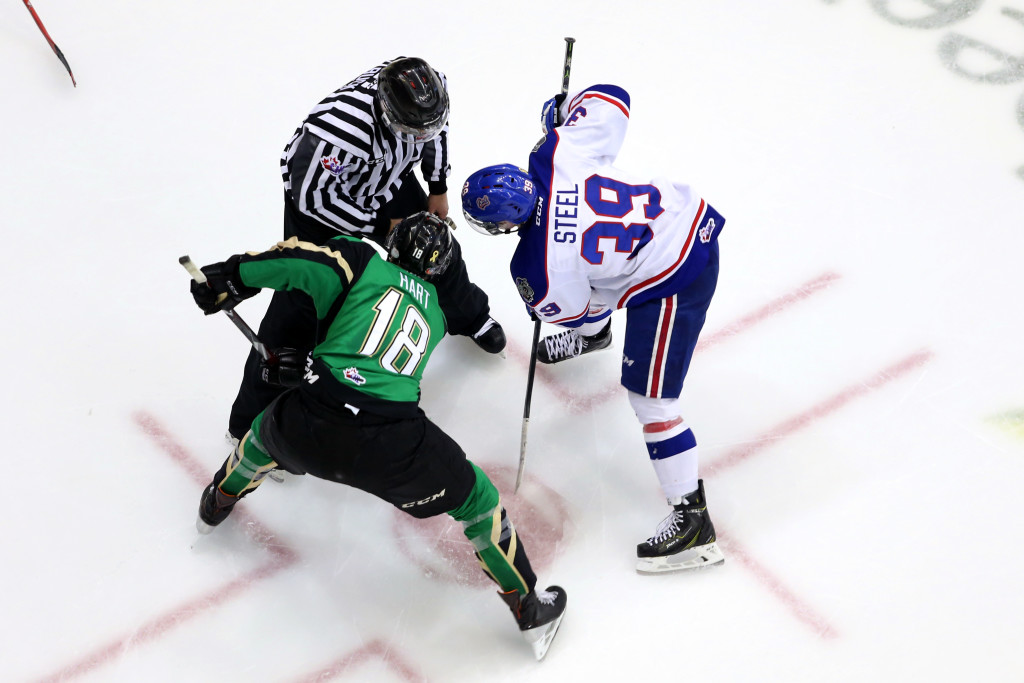 The Week That Was
The Pats worked in some valuable practice time and a little team building before heading back to the Central Division for an important road trip.  The Blue and White got into trouble in the second period of their contest against Kootenay when the Ice exploded for three goals in a 2:25 span.  The Pats fought back from the 3-0 deficit to tie the contest 3-3 and send it to overtime where they would eventually fall on Rinat Valiev’s winning marker.  The point proved valuable as the Queen City Kids grabbed the full two points the next night in Lethbridge.  After allowing the opening goal, the Pats scored the next four on the path to a 6-2 win over the ‘Canes.  Austin Wagner scored twice while Adam Berg had a two point night.

The Week Ahead
Tuesday, February 3rd – Pats vs. Prince Albert (7:00 p.m.)
After a road-heavy stretch, the Pats enjoy some home cooking starting off with a matchup against the Prince Albert Raiders.  Last time the teams met turned into a wild, high-scoring affair with the Pats coming up short in a 6-5 loss.  It’s Toonie Exchange night, so bring in your unused season tickets to exchange for $2 tickets at the Brandt Centre Box Office.

Friday,February 6th – Pats vs. Saskatoon (7:00 p.m.)
The Pats continue their home stand on a ‘Red Friday’ against the Saskatoon Blades.  The Pats look to continue their dominance over their Highway 11 rivals having won 11 straight versus the Blades.  Lucky fans have the chance to win prizes throughout the night courtesy of Game Sponsor ‘The Home Depot’.

Saturday, February 7th – Pats vs. Spokane (7:00 p.m.)
The Spokane Chiefs make their lone visit to the Brandt Centre for the next couple years.  It’s Pats fans first chance to see rookie sensation Kailer Yamamoto who sits 3rd in rookie scoring this season.  The Blue and White won last year’s meeting with the Chiefs, 2-1, in a shootout.

Making an Impression
Adam Berg’s first six games in the WHL have been impressive, culminating in a 1st Star performance Saturday night in Lethbridge.  The 17-year old scored his first WHL goal and added an assist against the Hurricanes to bring his total up to three points (1G, 2A) in six games with all his points coming over the last three games.  Berg makes his home ice debut Tuesday night.

Points as a Pat
Connor Hobbs picked up three assists on the weekend for his first points in the Blue and White.  The Saskatoon, SK native has a total of 5 points in 23 games.  Hobbs is CSS’ 100th ranked North American Skater for the 2015 NHL Entry Draft.

Home Depot on the Bench
Win the chance for your minor hockey team to practice with a Pats coach.  It’s easy to enter, just fill out the ballot at homedepotonthebench.com.  Contest closes February 4th.

Stagg Chili ‘Saves for Success’ Program
Want some help raising funds for your minor hockey team?  Stagg Chili will donate $1 for every home team save made in the WHL this season.  Learn how your team can qualify at www.staggchili.ca.