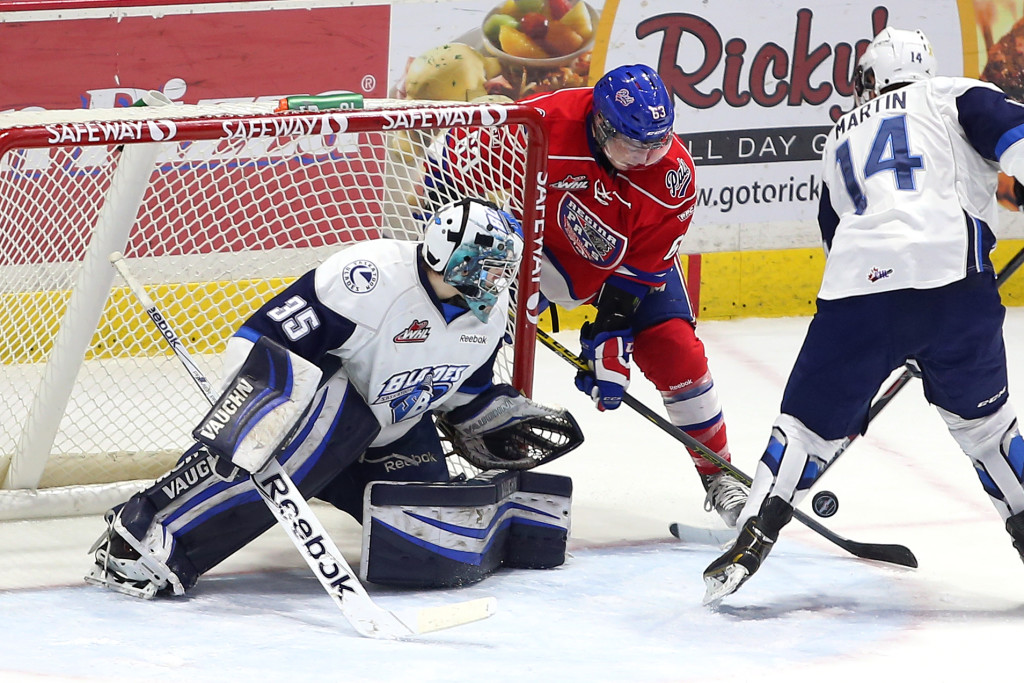 The Week That Was
The Pats hit the road early in the week as they visited the Medicine Hat Tigers.  The Blue and White found themselves on the defensive for much of the first forty minutes, but came out with a 1-1 tie.  The third period saw the Pats jump out to a 3-1 lead before the Tigers clawed back into a 3-3 draw.  Braden Christoffer regained the lead for the Pats, but the Tigers struck back with seconds left in the game before eventually winning 4-3 in the shootout.  The Pats returned to home ice for a key matchup with the Broncos, but didn’t have much jump in a 5-0 loss to Swift Current.  The Blue and White were supposed to take on the Prince Albert Raiders Saturday, but were forced to turn back due to poor weather and road conditions.  The long weekend wrapped up with the Pats hosting the Brandon Wheat Kings in a Family Day matinee.  The Wheat Kings scored twice late in the second to build a 4-2 lead before Sam Steel drew the game back within one.  The Pats couldn’t muster a tying goal and would fall 5-3 to Brandon.

The Week Ahead
Friday,February 20th – Pats vs. Saskatoon (7:00 p.m.)
The Pats host Saskatoon as they look to get back in the win column.  Last time the teams met, the Pats skated to a 5-2 victory.  Lucky fans in attendance can get their hands on mini-sticks and Pats blankets courtesy of game sponsor SaskTel.  Find the SaskTel Street Team and show them how you bust a move for your chance to win a phone!

Saturday, February 21st – Pats vs. Red Deer (7:00 p.m.)
The Queen City Kids welcome the 2016 Memorial Cup Host Red Deer Rebels for the second time this season.  Both of the teams previous matchups needed more than 60 minutes to be decided with the Rebels taking wins in overtime and the shootout.

Western Pizza Have-a-Heart Night
The Pats will be at Western Pizza locations for their annual “Have-a-Heart” Night.  Players will either deliver or serve tables with tips and delivery fees being donated to the Heart and Stroke Foundation.  Stop by or call your nearest Western Pizza Wednesday, February 18th between 6:00-8:00 p.m.

Season Ticket Holder Town Hall
A reminder for Season Ticket Holders that the Pats will hold their next “Town Hall” meeting Saturday, February 21st at 5:15 prior to the Pats’ game against Red Deer.  Governor Anthony Marquart and President Todd Lumbard will be in attendance representing Queen City Sports and Entertainment Group answering questions from Season Ticket Holders in an open forum setting.  Admittance to the meeting is through the West Entrance of the Brandt Centre.

Training for Life Dinner
The Regina Pats are pleased to partner with Special Olympics Saskatchewan for the upcoming annual Training for Life Dinner Tuesday, March 3rd at the Double Tree by Hilton.  Pats Head Coach and Sr. VP of Hockey Operations, John Paddock, will be the keynote speaker and members of the team will be in attendance to sign autographs and take photos with attendees.  Tickets are $50 and include a Pats game voucher!  To purchase, contact Chelsea Fidler at 306-780-9406.