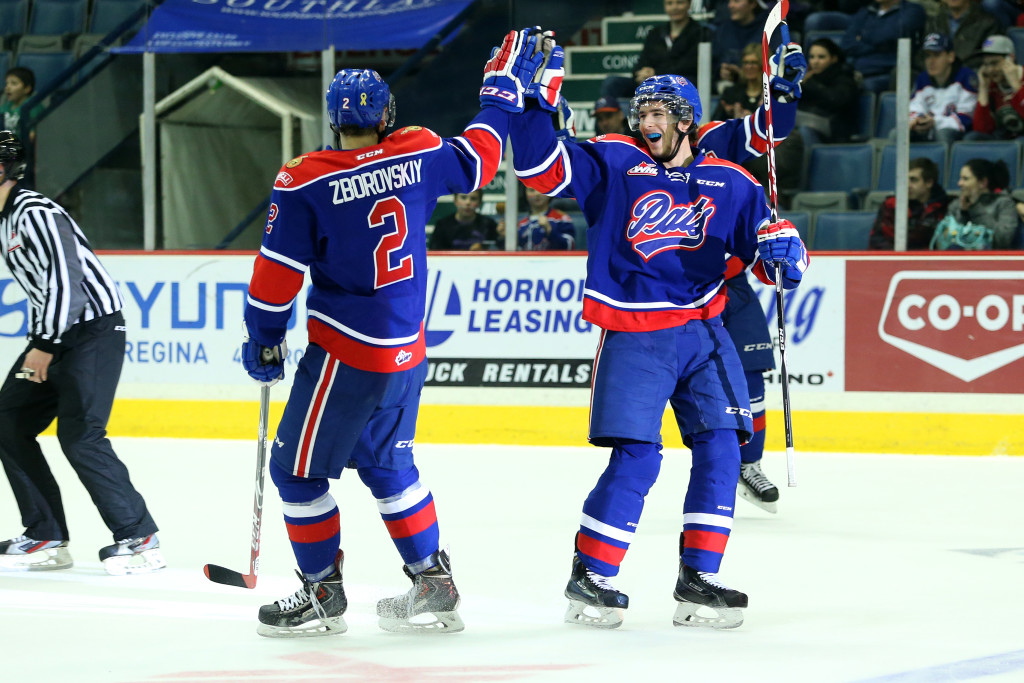 The Week That Was
The Pats closed out the unofficial second half of the WHL season with a weekday split.  Tuesday saw the Blue and White show plenty of resilience as they battled back from 2-0, 3-1, 4-2 and 5-3 deficits to beat the Wheat Kings in Brandon by a 6-5 score in overtime.  Connor Gay scored the game winner in the extra frame while Patrick D’Amico scored the tying goal when Chase Harrison’s shot went in off D’Amico’s skate.  The following night saw the tables turned on the Pats when they jumped out to a 2-0 lead and held the lead two more times including in the final two minutes, but fell to the Lethbridge Hurricanes 5-4 in overtime.  Nick Walters scored the winning goal for Lethbridge.

The Week Ahead
Saturday, December 27th – Pats at Swift Current (7:00 p.m.)
The Pats get back to action after their holiday break with a big contest in Swift Current.  The Broncos have given the Pats trouble this season with Regina going 1-3-0-0 against their division rivals.  Don’t miss out on the action, tune in to Home Depot Pats Hockey on 620 CKRM or WHL Live Web TV.

Sunday,December 28th – Pats vs. Swift Current (6:00 p.m.)
The back half of the home-and-home goes in Regina with a 6:00 p.m. puck drop at the Brandt Centre.  It’s  a key matchup for both squads regardless of how the first meeting goes.  The Pats look to solidify their hold on 2nd in the East Division while the Broncos look to cut into that advantage.

Merry Christmas
The Regina Pats Hockey Club wishes you and your family a Merry Christmas.  Have a wonderful and safe holiday season with family and friends.  We’ll see you at the Brandt Centre on the 28th for the Pats matchup with the Swift Current Broncos!

First Half in the Books
The first half of the 2014-15 season was one to remember for the Pats.  They posted their best start since the 2007-08 season, becoming the fourth team in the WHL to reach 20 wins this season.  Their overall record sits at 20-11-2-0 on the year, earning the team an honourable mention in the BMO CHL Top 10 the two weeks prior to the break.  Dryden Hunt leads the Pats with 36 points (12G, 24A) while the Pats feature nine players over 20 points so far.  Rookie Sam Steel leads all 16-year olds with 30 points in 30 games and is second in overall rookie scoring while Sergey Zborovskiy is 7th among rookie defencemen.

Neutral Zone Holiday Season Hours
With Christmas quickly approaching, the best stop you can make for the Pats fan on your list is the Neutral Zone Store.  The Neutral Zone is open one more day before Christmas, so stop by Tuesday between 11 a.m. and 2 p.m. to take care of your Pats themed shopping.  Be sure to check out the new product added to the Online Store at shop.reginapats.com.

Second Half Season Tickets
Don’t miss a second of the action on the ice in the second half of the season with the Pats’ new Second Half Season Ticket.  Purchase yours before January 2nd and be in the stands for all the game changing moments still to come this season and enjoy the new fan experience coming in 2015.  For more information, contact Kellin Enslev in the Pats Office at 306-337-1538 or visit ReginaPats.com.

Stocking Stuffer
The Pats are pleased to present a Voucher Pack Bonus Offer for all purchases now until December 31st.  When you purchase any 8-Ticket Voucher Pack (Adult, Senior or Youth/Special Needs apply), receive two (2) bonus vouchers to make it a TEN PACK!  To purchase, visit the Regina Pats Office in the West End of the Brandt Centre, or call the office at 306-522-PATS (7287).