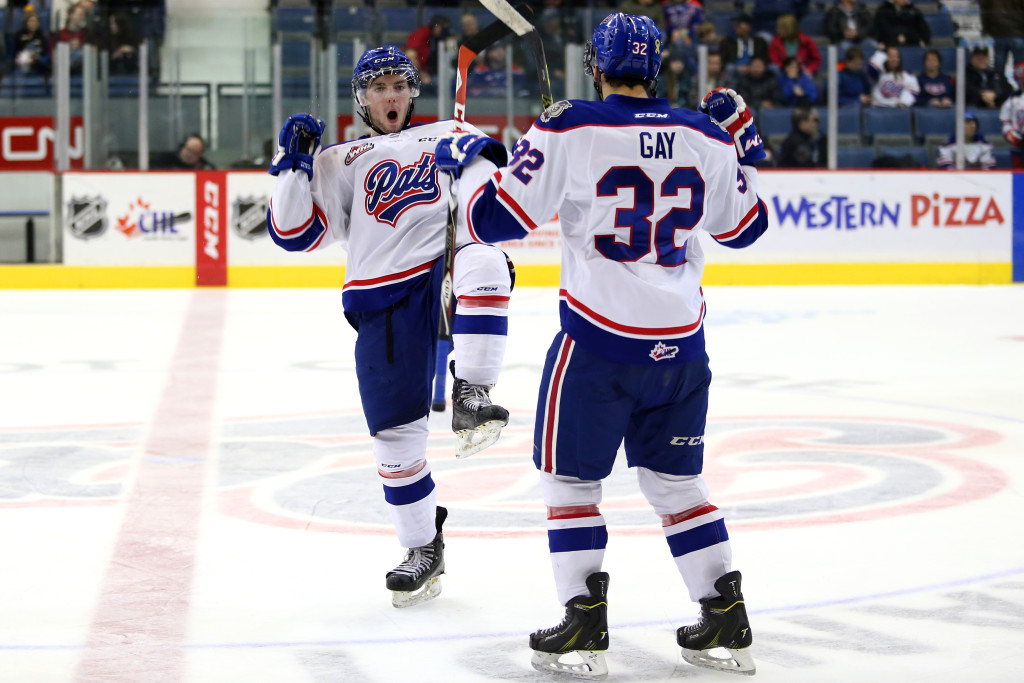 With the Pats looking to extend their recent dominance over the Warriors, they fought an uphill battle with Moose Jaw opening the scoring.  Torrin White drew a couple Pats along the boards before feeding Dallas Valentine in the slot.  The big defender showed slick hands going to his backhand and lifting the puck over Daniel Wapple as he sprawled out to make the stop 3:48 into the game.  Wapple and his counterpart Zachary Sawchenko turned away the rest of the chances and Moose Jaw carried the 1-0 lead to the break with the Pats leading the shots 9-8.

As the second period got going, the Pats seemed to be fighting tired legs in the final game of a four in five set.  Suddenly, the Blue and White found themselves tied with the Warriors when Adam Brooks tossed the puck into the slot and it redirected off Alexey Sleptsov into the net to even the game 1-1 9:21 into the frame.  Regina nearly took the lead minutes later as they started to find their legs.  A scramble in front of the Moose Jaw net saw the visitors hit both posts carrying a trend from the previous night in Saskatoon where the Pats hit three posts through the contest.  The goaltenders held the line despite further scoring chances and the teams went to the third period tied 1-1 with Moose Jaw leading the shots 20-19.

Chances abounded for both sides in the third period, but a go-ahead goal wasn’t in cards.  The Pats’ best chances came when Connor Gay came off the wing and rang the top of the cross bar and when Kyle Burroughs roamed into the faceoff circle shorthanded, but couldn’t beat Sawchenko.  With the deadlock carrying into overtime, the Warriors opened the extra period on the attack, but the Pats only needed one rush to end the game.  Dryden Hunt carried into the zone with Morgan Klimchuk racing to the net and calling for the puck.  Hunt fired a pass to the crease that Klimchuk tipped neatly to the top of the goal to end the contest just 1:06 into overtime for the Pats’ 23rd win of the season and tenth in a row against the Warriors.  Regina ended up outshooting Moose Jaw 31-27 in the contest with Daniel Wapple taking the game’s second star and Zach Sawchenko named the first star.

The Trans-Canada Clash comes to Regina for the first time this season Friday night when the Pats host the Warriors in a 7 p.m. puck drop.  Tickets are available at Ticketmaster.ca, the Brandt Centre Box Office and Safeway locations throughout Regina.