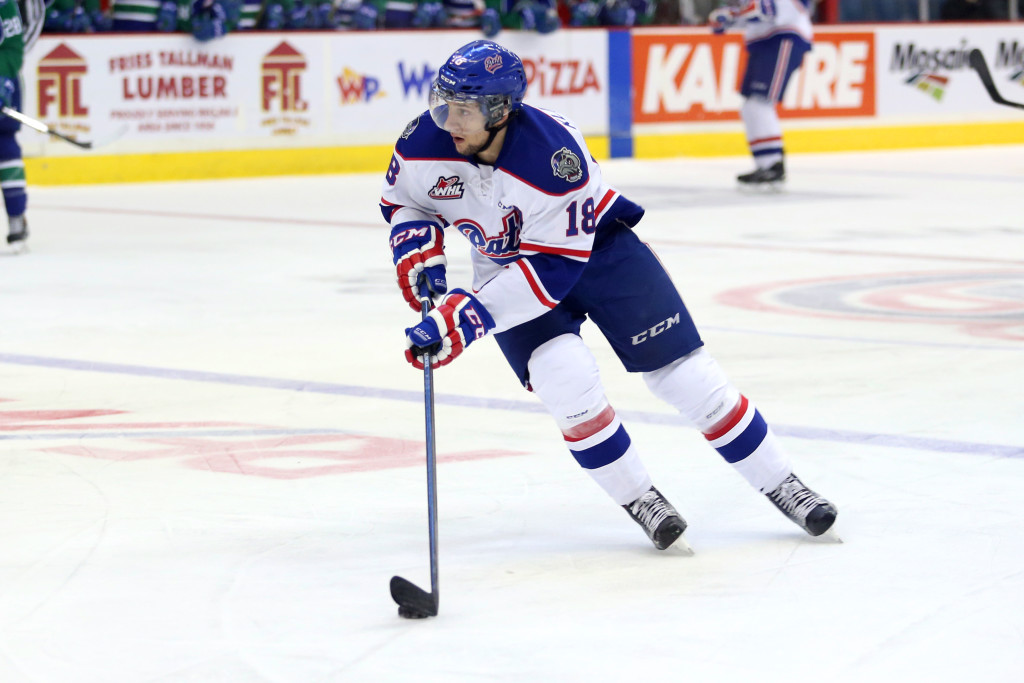 Regina, Saskatchewan – The Regina Pats (22-12-2-0) continued a busy stretch by facing off with the Saskatoon Blades (9-26-2-1) Tuesday night and the Pats pulled off a third period comeback to win 5-3.

For the fourth straight game, the Pats opened the scoring.  Dryden Hunt started the play by slipping by a check and driving to the front of the net.  His attack was turned away, but Patrick D’Amico got the puck to Connor Gay who slid it in at the 7:37 mark.  Saskatoon got on the attack in the second half of the period and found some offence.  Daniel Wapple nearly came up with an unbelievable save when he lunged back with his stick to stop Brett Stovin’s shot, but the puck bounced back into the net to even the game with four and a half minutes left in the frame.  The home side took the lead on a quick attack after the puck came from Nikita Soshnin into the middle for Sam McKechnie who went roof to send Saskatoon to the intermission with a 2-1 lead and 20-15 edge on the shot count.

The second period saw no scoring, but it wasn’t for a lack of chances.  The Pats had the bulk of the opportunities, hitting two posts in the frame.  Sergey Zborovskiy was foiled by the cross bar when he stepped into a wrist shot from the slot.  The second close call came on the powerplay when Sam Steel put a pass on the tape of Kyle Burroughs and the Pats captain rang his shot off the post.  Rykr Cole followed that up with a great chance, but was turned away by Saskatoon netminder Nik Amundrud sprawled in the crease.  The Pats outshot the Blades 12-7 in the frame and the shots sat 27-27 after forty.

The final period saw the Blades extend their lead early on the powerplay.  Ryan Graham’s wraparound attempt didn’t go, but went straight to the tape of Cameron Hebig who tucked the puck up under the bar to make it 3-1 before the two minute mark.  The Queen City Kids didn’t call it a night and went on the attack.  They were rewarded when Connor Gay got behind the defence, grabbed the puck away from Amundrud as he slid to poke check and finished for his second before the frame was six minutes old.  From there it was the Morgan Klimchuk and Adam Brooks show.  Braden Christoffer forced a turnover before Brooks slid the puck to Klimchuk for a tap-in to tie the game.  Just seconds later, Brooks picked a clearing attempt out of the air with his stick and sent another back-door feed to Klimchuk to put the Pats ahead.  The Flames prospect completed the natural hat trick in just 4:30 when Klimchuk banged in a rebound to send the Pats to a 5-3 victory while outshooting the Blades 37-33.

The Blue and White are in action Wednesday night when they close out the year with the latest edition of the Trans-Canada Clash in Moose Jaw.  Tune in to 620 CKRM at 6:35 p.m. for all the action.