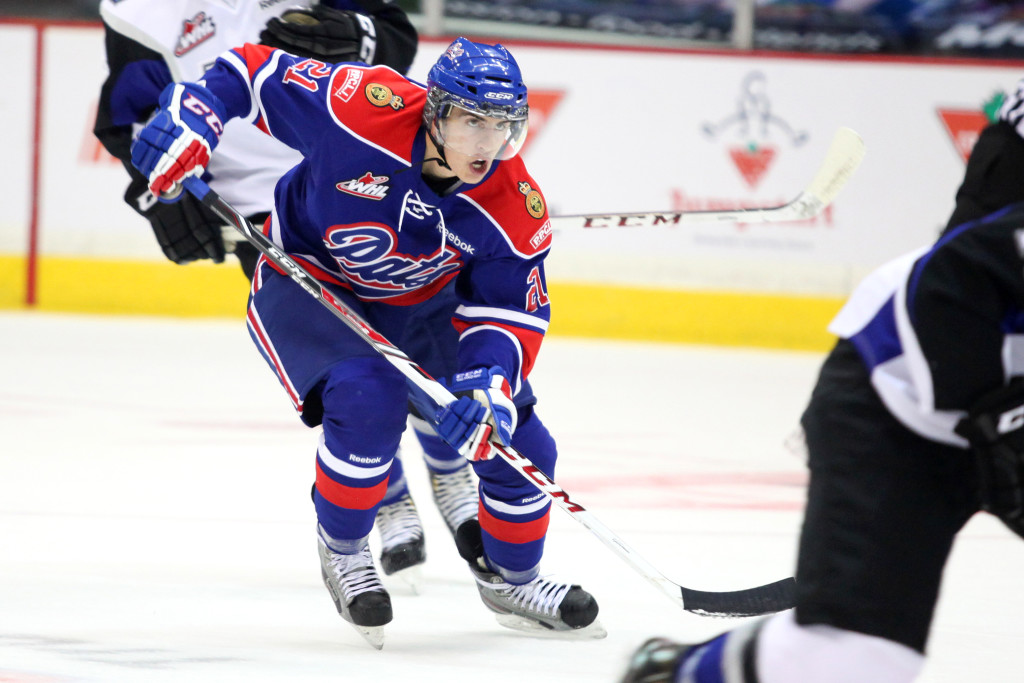 Regina, Saskatchewan – For Regina Pats forward Maximilian Kammerer, a trip to Malmö, Sweden not only meant a chance to participate in the 2014 IIHF World Junior Championship, but also an opportunity to return home.

Kammerer, who’s from Düsseldorf, Germany, received the invite to try out for his home country’s junior team in early December. He left for Malmö on Dec.12.

The German-born player practiced twice a day at the tryout camp before officially being named to the team just before Christmas. After making his country’s squad, Kammerer said many of his teammates texted him to congratulate his accomplishment.

“I just said congrats. You’re a good player, you deserve it, and all that hard work is paying off for you,” fellow Pats teammate Austin Wagner said.

Kammerer already knew majority of his German teammates. He said he played with several of them last year while representing Germany in the 2013 IIHF World U18 Championship.

Their first game of the tournament was against Canada. Kammerer cited the game as one of his favourites because Canada attracted a big crowd and media attention from TSN.

His most memorable contest though, was against the Czech Republic on Dec. 30.

“We played against the Czechs and because (they) won against Canada, all the Canadian fans were for us. They supported us. It was great,” Kammerer said with a smile.

Germany’s only preliminary round win came that night, shutting out the Czechs, 3-0.

Overall, they went 3-0-0-4 and didn’t qualify for the playoffs, but that didn’t stop Kammerer from enjoying life off the ice. With Düsseldorf only eight hours away, he returned home to see his family for the first time since he joined the Pats at the beginning of the 2013 season.

Although Kammerer was at home for only one day, he was able to reconnect with his family, friends, and girlfriend while relaxing and eating.

His parents and sister made the trip to Malmö to watch Germany’s preliminary games against the U.S., Canada, Slovakia, and the Czechs.

“He seemed to get more confidence and more opportunities as the tournament wore on. They had some injuries which gave him some additional ice time,” Cameron said.

When the forward returned to the Queen City on Jan. 7, Cameron was quick to congratulate him on his accomplishment.

“I just said, I hope you had a real good time and you should be real proud of yourself to represent your country in such a prestigious event.”

The head coach said Kammerer’s representation of his country in the tournament is both a great honour for him individually and for the Pats as well.

Looking back, playing in the World Juniors was a dream come true for Kammerer.

“It was a great experience,” he said.

“It was unreal because I never thought I’d play this year in the World Juniors.”

At 17 years old, Kammerer is still eligible to play in the tournament for another two years.