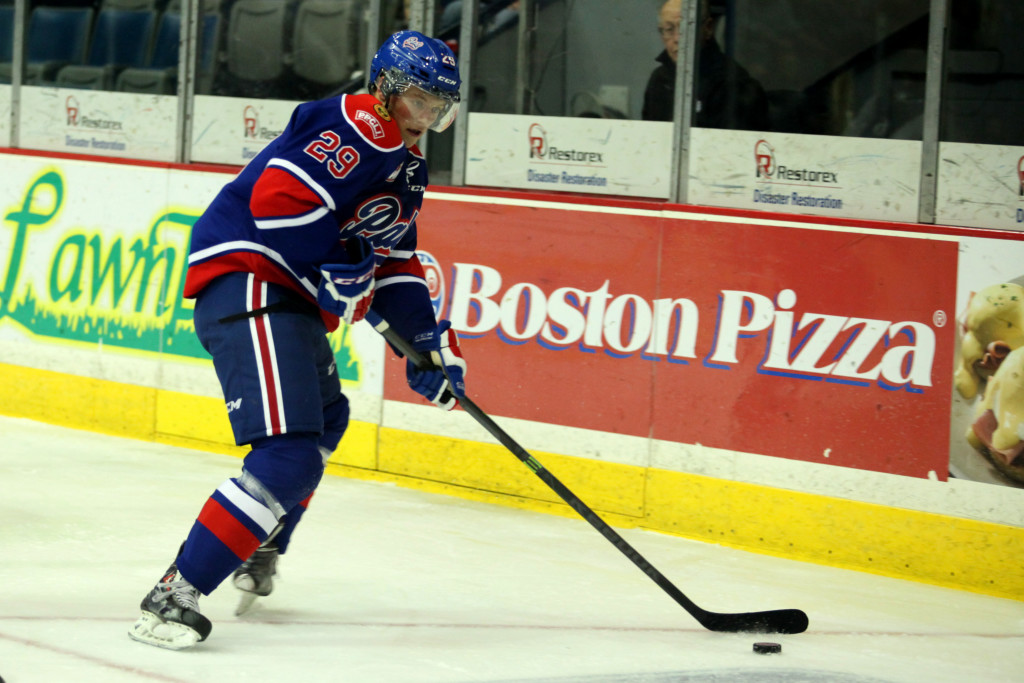 After getting back to what makes them successful in Prince George, the Pats carried that momentum into the first period of their contest in Kamloops.  Just 3:40 into the contest, Dryden Hunt forced a turnover and moved the puck to Sam Steel who fed Connor Gay for the opening goal of the game.  Just over one minute later, Morgan Klimchuk tossed the puck in front of Connor Ingram, circled the net, found the puck and flipped a backhander into the net.  Ingram’s night ended 5:50 into the game when Luc Smith sent the puck cross ice to Jared McAmmond whose shot just managed to get over the line to give Regina a 3-0 lead.  With time winding down in the period, Dyden Hunt created some space for Kyle Burroughs and slipped the Captain a one-timer feed that Burroughs ripped in off the post for a 4-0 lead after one period.  Despite heavily outscoring the Blazers, the Pats trailed 15-14 in the shot count after twenty.

The scoring barrage continued into the middle period as Gay caught a pass from Hunt in the slot and snapped a shot by Kehler to push the score to 5-0 Pats just 43 seconds into the frame.  The Pats couldn’t find another goal for a stretch due to some great stops by Kehler, keeping the gap at five.  The Blue and White found a way by the Kamloops netminder on the powerplay.  Hunt snuck the puck into the crease and Burroughs raced in from the faceoff, diving to play it over to Pavel Padakin who tapped it into the goal at 6:18 of the frame.  The Blazers finally solved Pats netminder Tyler Brown when Mike Winther tapped the puck into the middle for Luke Harrison who shoveled it into the goal on the backhand which moved the counter to 6-1 in favour of the Pats through forty minutes.  Shots were tied 26-26.

The third period saw the Blazers close the gap just under three minutes into the frame.  Matt Revel fired a shot off Brown that came to Logan McVeigh. The former Pats forward slid the puck into the Pats net to cut the lead to four.  That wouldn’t stay for too long as Dryden Hunt made it a five assist night, spying Connor Gay in front and he buried his second hat trick of the season.  Late in the frame, the Blazers would again bring the score back within four when Patrik Maier blew a slap shot through the crowd in front and to the back of the Pats net to round the scoring out in a 7-3 Pats win.  The shots wound up favouring the Queen City Kids by a 44-37 count.

The Pats close out their B.C. road trip tomorrow night in Kelowna against the WHL leading Rockets.  Tune in to the action starting at 8:40 p.m. CST on 620 CKRM or WHL Live Web TV.