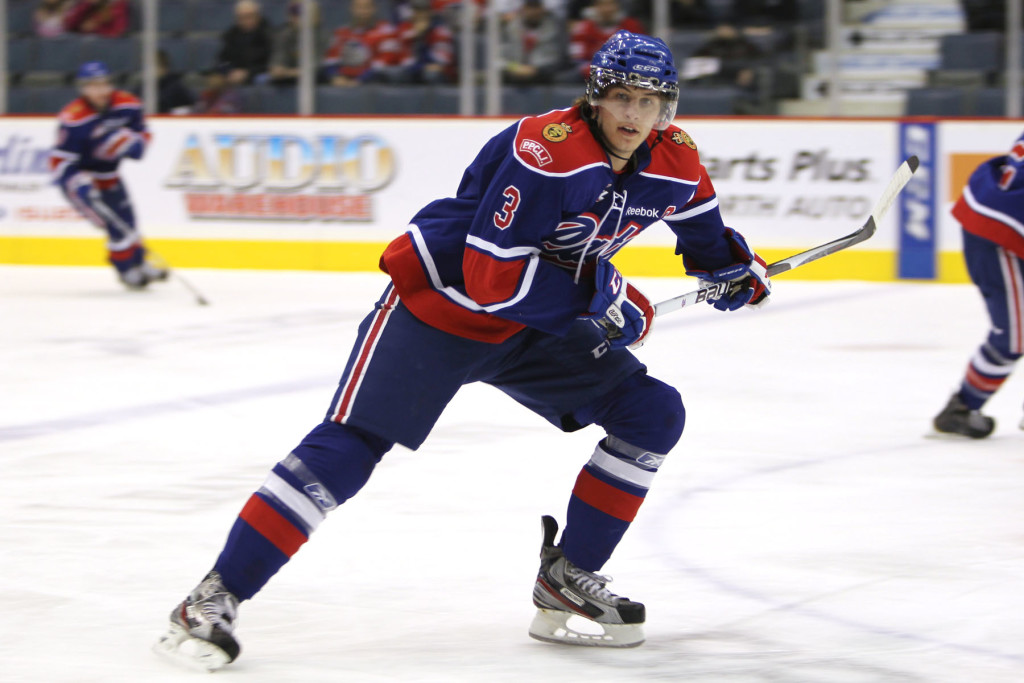 Before taking the biggest step of his hockey career, Brandon Davidson took a small step back.

Amid the chaos of preparations for his NHL regularseason debut with the Edmonton Oilers, Davidson was able to find a moment of calm reflection – pausing just long enough to comprehend that his boyhood fantasy was about to become a reality.

“It was a dream come true for me,” Davidson said Thursday from Edmonton – one day after suiting up in the Oilers’ 2-1 loss to the host Anaheim Ducks.

“I haven’t had a whole lot of time (to reflect) but I’ve taken a couple deep breaths and really took in the moment during warm-ups. It has been a journey for sure, but I don’t think the journey is over quite yet. I still have a lot of work to do. I want to keep pushing myself and always get better.”

It was a solid debut for the 23-year-old defenceman, who finished with a plus-one rating in just over 13 minutes of icetime.

However, there was one notable misstep.

“At one point I was too excited and I jumped the bench when I wasn’t supposed to, but I got off in time,” he said with a laugh. “I was very nervous. A lot of people would be in that situation. I enjoy the nerves. It makes you feel more alive.”

If Davidson has shown anything to this point, it’s the ability to persevere and adapt. He took the hard road to the NHL, overcoming adversity with a blue-collar mindset that was forged on the family farm near Taber, Alta., where money was tight.

Davidson wasn’t always afforded the luxury of toptier hockey, limiting his exposure to WHL scouts before he finally moved up to the midget AAA level in Lethbridge at age 17. That’s when he caught the attention of the Regina Pats, who helped Davidson grow from a late bloomer to one of the most respected captains of his era.

“Hopefully the Oilers keep me around and I can be a part of that.” Brandon Davidson

The Oilers took notice as well, selecting him in the sixth round of the 2010 NHL draft. Two years later, he was rewarded with his first pro contract.

“By scraping and clawing at things, it definitely makes you appreciate it a lot more,” he noted. “I’ve earned my way here, but I know it was just one game and I want a lifetime in the NHL. Hopefully the Oilers keep me around and I can be a part of that.”

Davidson became a fulltime member of the organization in 2012-13, but his first pro season was quickly derailed by the shocking news that he had been diagnosed with testicular cancer.

He underwent treatment in Oklahoma City – home of the Oilers’ AHL affiliate, the Barons – and was able to rejoin his teammates late in the season.

Although he still must undergo an occasional follow-up test, Davidson hasn’t looked back, using the experience to make him a better player and stronger person.

“I’ve put it behind me in a sense but I definitely learned from it,” he noted. “That’s part of my life I’ll never forget. It definitely made me appreciate everything, whether that be family or hockey. It changed me as a person but it also made me better.”

Davidson enjoyed his first full season with Oklahoma City in 2013-14 and came away with a renewed determination to take the next step. Another wrench was thrown into those plans when he suffered a sports hernia before Oilers training camp, forcing him to sit out the entire pre-season.

Undaunted, Davidson began to work his way back up the depth chart in Oklahoma City. His reward came Tuesday with a long-awaited call from the Oilers, who needed him to replace veteran defenceman Nikita Nikitin due to a bad back.

His loss was Davidson’s gain.

“I’m extremely excited and happy that I was able to get the opportunity to play,” he added. “It has always been a dream of mine – the only dream of mine. To now know I can play at that level, I just want to keep things going and hopefully help bring some success here to the Oilers.”