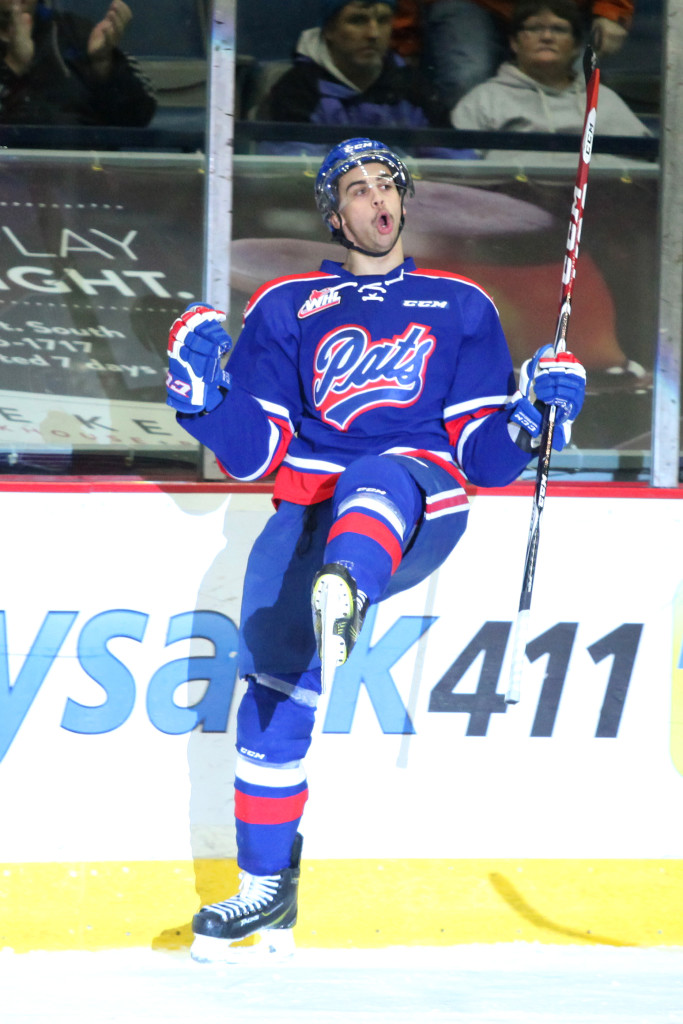 First Period
The Blue and White opened strong, sending the first four shots of the game toward Tristan Jarry in the Edmonton goal.  The Oil Kings would open the scoring though as Davis Koch created a turnover in the Pats zone and Brandon Baddock fed Luke Bertolucci in front and the 19-year old made no mistake with just over five minutes left in the period.  The Pats couldn’t seem to get into a groove, but found a tying marker before the end of the frame.  Off an offensive zone faceoff win, Kyle Burroughs and Connor Gay were both turned away, but Dryden Hunt banged the rebound to the back of the net.  That marker squared the game 1-1 through twenty minutes with the shots tied 10-10.

Second Period
On its third powerplay of the game, Edmonton cashed in when Ashton Sautner fed to Lane Bauer for a go ahead marker three minutes into the frame.  Connor Gay had the equalizer lined up for Regina when Dryden Hunt slid the puck to the Pats’ leading scorer and Gay sent the puck behind Jarry.  Again Edmonton took the lead when a giveaway in the neutral zone turned into a two-on-oh for the Oil Kings and Mads Eller sent the back door pass to Tyler Robertson who tapped it in just shy of the thirteen minute mark.  Just over a minute later, Rykr Cole stole the puck in the Edmonton end and fooled Jarry with a backhand along the ice for his first WHL goal and a 3-3 tie.  Regina held the lead in shots with a 23-21 edge after forty minutes.

Third Period/Overtime
It took until the final frame for the Pats to finally grab the lead.  On an early powerplay, Colby Williams fired from the faceoff circle and hit the post, but the puck hit Jarry in the back and rolled into the goal.  The back and forth continued as shortly after the midway point of the period, Lane Bauer skated onto a loose puck and sniped the top corner to even the contest with a powerplay goal. The score held at 4-4 until zeroes on the clock to force overtime.  With 2:15 left in overtime, Connor Gay lifted a stick and raced toward the Edmonton net on a sharp angle.  Gay shifted and sent a nifty backhand to the top corner and send the Pats to a 5-4 win.  Regina finished ahead in the shot count, 34-32.

The Pats get on the bus tonight to head out for their annual western road swing.  The club opens the set of road games in Vancouver on Friday.  Tune in on 620 CKRM to hear all the action.