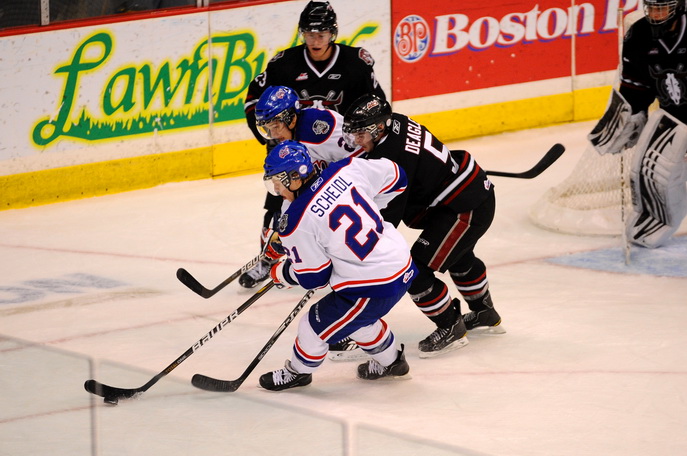 Head to Head
This is the first of four meetings of the season between the Regina Pats and the Red Deer Rebels. Three of the four games a season ago went to extra time with the Pats winning both of the games at the Enmax Centrium in a shootout.

Last Action
The Pats rolled into Rexall Place in Edmonton 24 hours ago and came away with a dominating 6-2 victory over the Oil Kings. The game was tied at 2 heading into the 3rd period before the Pats exploded for four straight goals. Brandon Davidson scored twice while his defensive partner, Brandon Underwood notched 3 assists. Matt Hewitt picked up his league leading 7th win of the season, stopping 24 of 27 Edmonton shots.

Injuries:
None To Report
Games lost due to injury – 7

Just the Facts
Pats Acquire 20 year old:
The Regina Pats filled out their third and final 20 year old position early yesterday as they picked up forward Matt Marantz from the Lethbridge Hurricanes in exchange for a 4th round WHL Bantam Draft pick in 2013. Marantz joined the Pats in Calgary and played against the Hitmen. He will wear #10 to finish the trip, but will switch to #32 when he gets home.

On the Road Again:
The first half of the season for the Regina Pats is a grueling one 10 of their first 16 are on the road and if you extend it to early December, 20 of the Pats first 32 games are on the road. The road has been kind thus far for the blue and white as they currently are 5-1 away from the Brandt Centre to start the season

Youngsters lead the way:
Jordan Weal currently leads the Pats in scoring with 11 points, but the next two players in the team scoring race play on the same line in Dyson Stevenson (10) and 16 year old rookie Morgan Klimchuk (10). Dominik Volek rounds out the line and he too is having a great start to his rookie campaign with 8 points

In Matt we Trust:
19 year old goaltender, Matt Hewitt is one of the main reasons why the Pats are off to a great start. He is tied for first in the WHL in wins (7) while he’s eighth in goals against average (2.34) sixth in save percentage (.924) and is tops in shootout wins with 2.

Quick Start in the East:
The Regina Pats 7-2 start to the season would usually put them in the driver’s seat early in the season, but the whole Eastern conference has come out of the gate flying with all but 4 teams are above the .500 mark.