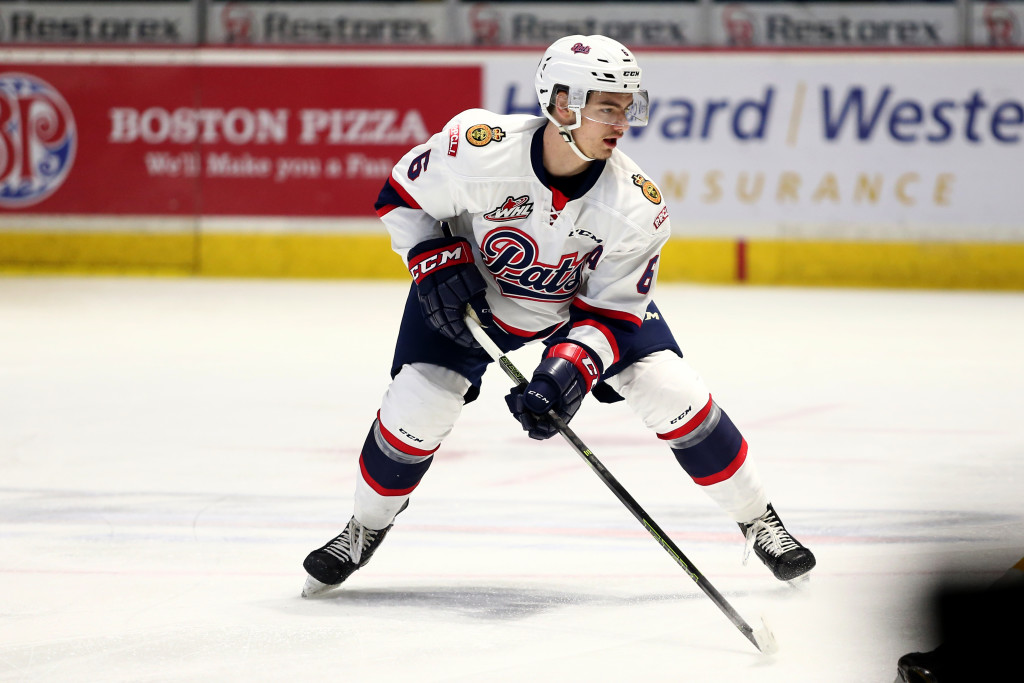 Regina, Saskatchewan – The Regina Pats (22-22-3-4) welcome the Prince George Cougars (31-20-2-1) to the Brandt Centre (7 p.m.) for the teams’ lone meeting of the season.  Last year’s matchup saw the Pats skate to a 5-2 victory in Prince George.  Morgan Klimchuk scored a pair of goals in that contest.  Sam Steel had two assists and Adam Brooks added a goal.  In the last five meetings between the clubs, the Pats hold a 2-2-0-1 record against Prince George and have won the last two contests.  The Pats head into this evening’s matchup with a 3-2-0-0 record in their last five games.  Tonight’s game can be heard on 620 CKRM beginning at 6:35 p.m.

Don’t forget to snag your free toque at the game tonight courtesy of our game sponsor, The Home Depot.  Toques will be available at the doors while supplies last so arrive early to get yours.

In a key matchup, the Pats ran with a strong start to pick up a convincing win over the Tigers.  Sean Richards opened the scoring early when he tipped a Chase Harrison point shot past former Pat Nick Schneider.  Austin Wagner and Lane Zablocki followed to give the Pats a 3-0 lead before Alex Mowbray cut it to 3-1 ahead of the break.  Sam Steel added more insurance in the middle frame and Sergey Zborovskiy capped the contest with an empty netter to seal the victory.  Adam Brooks had a four assist night and Tyler Brown made 41 saves in the win.

One night after Cole Sanford faced off against his old club, former Pat Jesse Gabrielle returns to the Brandt Centre.  The Boston Bruins prospect posted 19 points (10G, 9A) in 33 games with the Pats after joining the team at the 2015 WHL Trade Deadline.  Former Cougar Aaron Macklin will miss his only opportunity to face the team he played 97 games with while registering 17 points (7G, 10A) and 202 penalty minutes.  Pats forward Lane Zablocki was originally selected in the 5th round, 109th overall, by the Cougars in 2013.

The Prince George Cougars are the final Western Conference team the Pats face off against this season.  Coming into tonight’s action, the Pats hold a 3-5-0-1 record against out-of-conference opponents.  Their recent U.S. Division swing saw the club put together a 2-2-0-1 record.  Home ice hasn’t been a refuge for the Pats against B.C. Division opponents, as the Blue and White collected a 1-3-0-0 record against their B.C. based foes.

Adam Brooks assaulted the scoresheet last night, assisting on four of the Pats’ five goals.  The outpouring was Brooks’ fifth four point night of the season and brought him up to 51 assists on the season.  It also brought the Winnipeg, MB product back to the top of the WHL scoring list with 78 points.  Two up on Dryden Hunt and Brayden Burke.

Tickets for tonight’s game are available at Ticketmaster.ca, the Brandt Centre Box Office and Safeway locations throughout Regina.