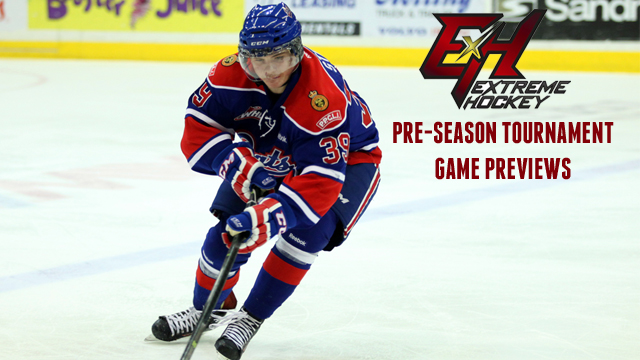 Regina, Saskatchewan – The final day of the Extreme Hockey Pre-Season Tournament at the Cooperators Centre showcases a second double header with the Calgary Hitmen and Prince Albert Raiders going toe-to-toe in the matinee contest and the Regina Pats battling the Lethbridge Hurricanes.

Calgary Hitmen (0-1-0) vs. Prince Albert Raiders (0-1-0) – 3:00 p.m.
The Raiders looked to be headed for their first win of the tournament before the Hurricanes found a late tying goal and went on to the 2-1 shootout victory yesterday afternoon.  Now Prince Albert looks to rebound against the Hitmen who saw a lead of their own dissipate in the third period against Regina last night.  Matteo Gennaro scored the only goal for the Raiders and leads the team in tournament scoring.  Calgary is led by Radel Fazleev who had three points (1G, 2A) and Greg Chase who scored twice last night.

Regina Pats (2-0-0) vs. Lethbridge Hurricanes (1-0-0) – 7:00 p.m.
Tonight’s finale features the two undefeated squads in the tournament. The Pats roll in with the most offence in the tournament after posting 15 goals in their last two games.  Maximilian Kammerer leads the way with five points (2G, 3A) over the last two games.  Sam Steel and Connor Gay are right behind him sitting at four points after their game against Moose Jaw.  The Hurricanes are the most rested team in action today after an early game yesterday and playing in tonight’s late matchup.  Carter Amson scored the ‘Canes lone goal in their comeback win against Prince Albert to lead Lethbridge in scoring.

Tickets for both games are $5.00 and are available at the doors one hour prior to each game at the Cooperators Centre.