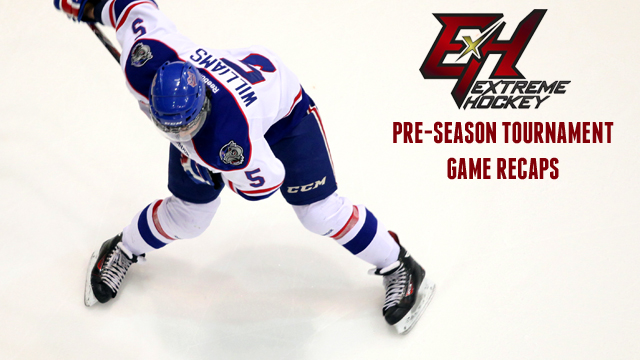 Regina, Saskatchewan – The Extreme Hockey Pre-Season Tournament opened at the Cooperators Centre Thursday night with just one game featuring the best rivalry in junior hockey, the Regina Pats against the Moose Jaw Warriors.

Regina Pats 9 vs. Moose Jaw Warriors 1
The first period saw only one marker that came off the stick of Sergey Zborovsky.  The Pats import snuck in off the line, accepted a pass from Dane Schioler and tucked a shot in the top corner of the net for the icebreaker.

The middle frame saw the Pats offence come to life.  The Blue and White got their second marker when Maximilian Kammerer’s shot rebounded off the skate of Jacob Elmer and into the Moose Jaw net.  56 seconds later, Sam Steel made a slick play to stay onside then beat the defender to the outside and rifled the puck by Warriors goalie Brody Willms.  Kammerer would add a marker of his own, showing quick hands in front of the net and Austin Wagner pushed the score to 5-0 before the break.

With the Pats on the powerplay to start the third period, the puck made its way to Sam Steel at the far side of the net and he bagged his second goal of the night 39 seconds into the third.  The Pats’ top line struck again before the period was three minutes old when Steel found Braden Christoffer in front and the over-age forward moved to the backhand before sliding the puck into the goal.  The Warriors got their marker off the stick of Noah Gregor when the 16 year old took a pass from Ryan Bowen and buried into an open cage.  The Pats tacked on two more goals before the end of the contest with Elmer getting his second of the night and Connor Gay finishing off a flashy play from Steel.

The Extreme Hockey Pre-Season Tournament resumes Friday with the Prince Albert Raiders and Lethbridge Hurricanes facing off at 3:00 p.m. while the Regina Pats take on the Calgary Hitmen at 7:00 p.m.  Both games will be played at the Cooperators Centre.  Tickets can be purchased at the doors ahead of each game for $5.00.