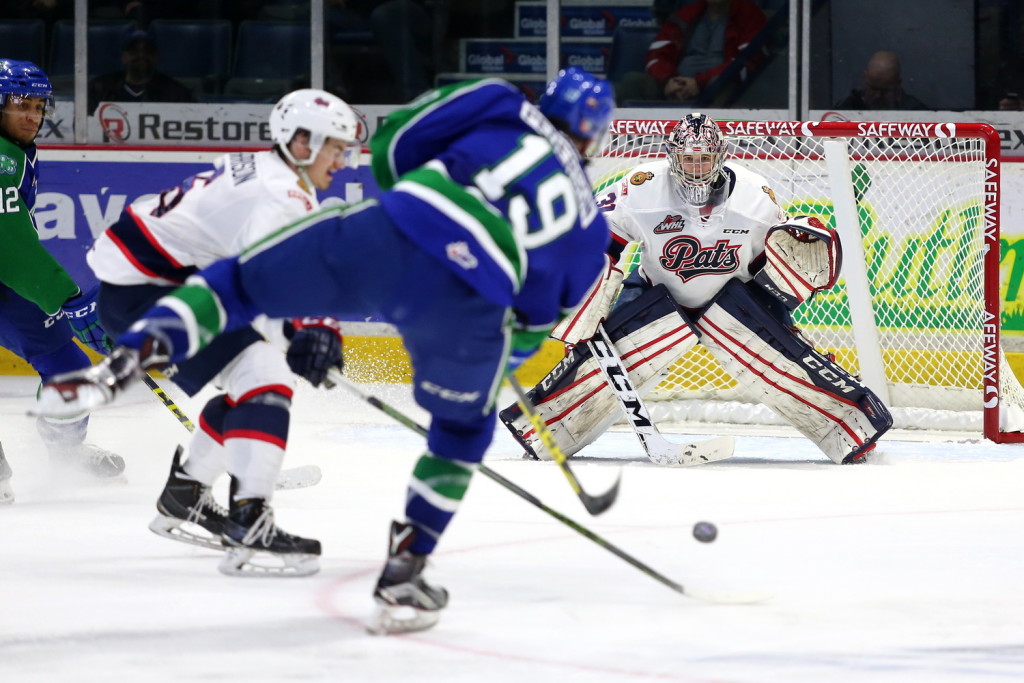 Regina, Saskatchewan – The Regina Pats (31-27-3-5) enter the most important week of their season, starting off with a road matchup against the Swift Current Broncos (23-35-5-3).  It’s the teams’ fifth of six matchups this season with the Pats holding a 2-1-0-1 record against the Broncos.  Their previous meeting saw Swift Current come away with a 3-2 shootout victory at the Brandt Centre.  Adam Brooks (2G, 3A) and Sam Steel (1G, 4A) lead the Pats with five points in four games against the Broncos.  Tyler Brown is 1-1-0-1 with a 2.22 GAA and 0.940 SV% in the season series.  The Pats come into to this evening’s action looking to rebound after an 8-1 loss to Brandon.  Tonight’s game can be heard on 620 CKRM beginning at 6:35 p.m.

The Pats face their most important week of the season if they want to catch the Moose Jaw Warriors for third in the East Division.  Regina holds a game in hand which is used tonight against the Broncos.  If the Pats win, they restore their deficit to four points leading into a home-and-home series with the Warriors on Friday/Saturday.  In addition to their 2-1-0-1 record against Swift Current, the Pats are 2-2-1-1 against Moose Jaw this season.

“(The Broncos) are going to come out with a lot of energy,” defenceman Connor Hobbs told the media yesterday.  “I love playing against Swift Current, I think they’re a more than worthy opponent.  They’re a very good team, and though it might not show in the standings, they’re a tough team to play against.  It’s another challenge, and I don’t see why we can’t beat them.”

Cole Sanford is on a three game goal streak with five goals over that span including a hat-trick last Wednesday.  The over-age forward now has 17 goals in just 24 games with the Pats.  Since joining the Blue and White, Sanford has five multi-goal games and five powerplay goals.  Overall, Sanford has 38 goals and 28 assists for 66 points on the season, tied for 26th in WHL scoring.

Rookies Jared Freadrich and Sean Richards saw their productivity increase dramatically in the second half of the season.  Freadrich, a defenceman, had five points (1G, 4A) through December.  Since then, he’s totaled 13 points (3G, 10A) including three multi-point games.  Richards, a forward who joined the Pats mid-season from the Olds Grizzlys, had three assists through December.  Since 2016 began, Richards has 15 points (3G, 12A).  Freadrich is eligible for the 2016 NHL Entry Draft while Richards isn’t up for selection until 2017.

Tune in to tonight’s game on 620 CKRM with Bennett Dunlop Ford Pats Hockey getting going at 6:35 p.m. and puck drop slated for 7 p.m.