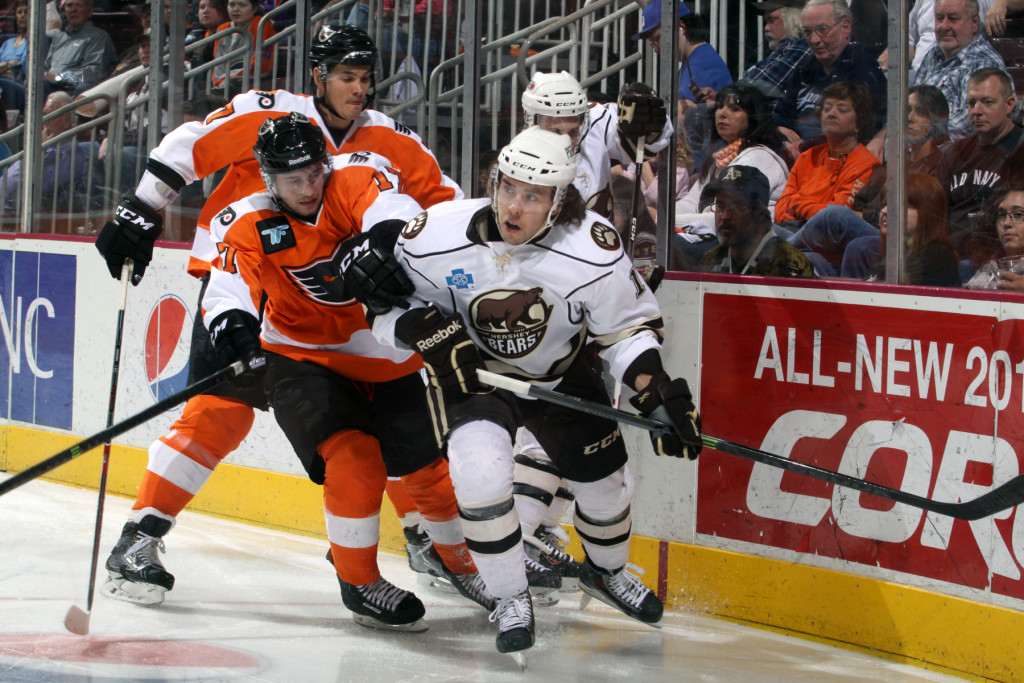 Three Regina Pats spent time in the professional ranks at the close of the 2013-14 season.  Kyle Burroughs, Morgan Klimchuk and Chandler Stephenson all made their regular season pro debuts.  Daniel Fink catches up with all three to break down their experiences.

As a player progresses through his career, there are milestone off-seasons.  Those might include being selected in the WHL Bantam Draft, the summer leading up to their first season of junior eligibility, being picked in the NHL Entry Draft and the off-season ahead of the opportunity to play professional hockey.  Pats star Chandler Stephenson finds himself in the final category.  After a career year in Regina, the Saskatoon product hopes to be wearing a Washington Capitals or Hershey Bears sweater in the 2014-15 season.

A source of surprise for many, Stephenson hadn’t signed a contract with the Capitals organization all through the 2013-14 season.  When the Pats playoff stint came to an end, Chandler still remained without a contract which prevented him from joining the Hershey Bears immediately.  If he remained unsigned by Washington, Stephenson would have re-entered the NHL Draft, but it didn’t get that far.  The Capitals announced the speedy playmaker’s signing in early April.

“There were obviously a little bit of nerves, but my agent just said to relax and let (the agent and the team) do the business side of things and during the season just play hockey,” Stephenson recalled.  “I wasn’t too worried, but there’s always that little doubt you have.  I’m glad we got the deal done and I’m happy to be a Washington Capital.”

With the deal signed, Stephenson was on his way to Hershey to get some action in before the non-playoff Bears’ season came to a close.  Despite the delay in being able to join the Bears, Stephenson didn’t waste any time finding the goal column, scoring his first professional goal early in his first game against the Norfolk Admirals.

“It was pretty crazy,” chuckled Stephenson.  “I just got the puck from Cameron Schilling and saw him going to the net so I decided to throw it on net and it went in.  I heard the post and kind of saw it go in and couldn’t believe that it went in.  It was a pretty cool experience and I couldn’t help but smile.”

After a nonchalant celebration, he headed back to the bench where congratulations from his teammates and coaches were waiting.

“They were joking around saying ‘it’s a pretty easy league’ and stuff like that.  Everybody including the coaching staff and the trainers congratulated me and I got the puck and all that.  It’s a memory I’ll never forget.”

Unlike Kyle Burroughs and Morgan Klimchuk, Stephenson had some professional game experience under his belt before heading to Hershey.  He played two NHL pre-season games with the Capitals in 2013.  That experience helped the 2012 3rd Round NHL pick shift gears to the professional game.

“It was awesome just to experience being a pro and what it’s like and playing, practicing and hanging out with those guys it was a great experience.  It is professional; when you’re there it’s a whole different mentality that guys have.  They’re grown men and it’s a lot different from junior.”

Stephenson also spent some time with the Bears late in the 2012-13 season, but didn’t see any game action.  That time helped him grow comfortable with the AHL club and made his time in Hershey an even better experience this year.

“Playing two games (this season) was a great experience just being there and taking it all in.  Being there last year made it a little more comfortable and a little more relaxing I guess.  To play those two games let me get a feel for the game and the speed.”

Despite the different levels and accomplishments these milestone off-seasons represent, they all have something in common.  The work a player puts in needs to increase to achieve the best results.  For Stephenson that consists of a week full of training mixed in with some leisure time for balance.

It’s tough to imagine the WHL’s shorthanded goal leader adding more speed to his already impressive velocity on the ice, but that’s what Stephenson hopes to build on ahead of the 2014-15 season.

“I always want to work on speed because guys are bigger, faster and stronger in (pro leagues).  To be honest, I have to work on everything just to get my game to that next level and better myself that much more.”

Stephenson will start working his way to earning a spot with the Capitals or Bears July 7th-12th in Arlington, Virginia when the Capitals hold their annual Development Camp.