Chance to Close Series in Lethbridge 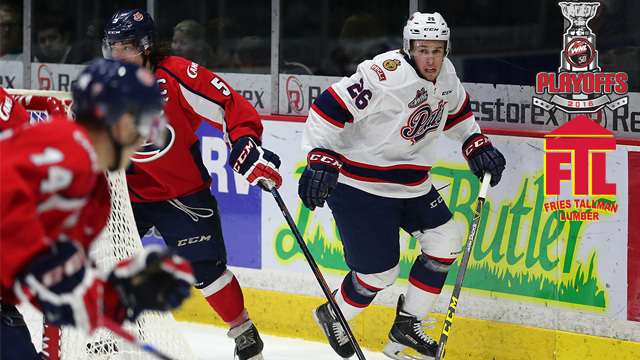 Lethbridge, Alberta – The Regina Pats (3-1) and Lethbridge Hurricanes (1-3) head back to the Enmax Centre (7 p.m.) in Lethbridge for Game Five of their first round matchup.  The visiting Pats have an opportunity to end the series with a victory following a 2-0 win on home-ice Wednesday.  In another tight-checking affair, Cole Sanford provided the only offence of the first period.  The second period saw the goaltenders and defence hold the line, keeping the score at 1-0 through forty minutes.  With the Hurricanes pressing late and the net empty, Adam Brooks spun a Hail Mary shot from his own faceoff circle into the Lethbridge net.  Tyler Brown made 32 saves for his second shutout in three games as the Pats captured the 2-0 win.  Tune in to tonight’s game on 620 CKRM at 6:35 p.m.

Tyler Brown is having a series for the ages.  In his first crack at WHL playoffs action, Brown holds a 3-1 record to go with a 2.00 goals against average and a 0.938 save percentage.  With two shutouts in his last three games, the Winnipeg, MB native already tied a Pats franchise WHL record, matching Ed Staniowski (1974, 19 games) and Bernie Germain (1972, 16 games).  In the Pats’ three wins, Brown has a 0.67 GAA and a 0.978 save percentage.

The Pats put plenty of faith in rookie call-up Robbie Holmes and were rewarded.  The 16-year old forward made his WHL Playoffs debut in Game Four skating alongside Sam Steel and Cole Sanford.  The Pats’ 11th round selection in 2014, Holmes scored a goal in each of the two games he played with Regina during the regular season.  Holmes didn’t register a point in his first playoff game, but came out an even plus/minus playing a regular shift.  John Paddock hasn’t had reservations about playing call-ups in the playoffs with Jake Leschyshyn and Adam Berg each playing all nine of the Pats playoff games last season.  Brady Pouteau also played in two games in the 2015 Playoffs.

At the WHL Trade Deadline, the Pats acquired Cole Sanford to add scoring punch to their lineup.  Games Three and Four saw that trade pay dividends.  Sanford scored a tying goal late in the first period of Game Three before assisting on the Pats’ second goal of the night.  Game Four saw Sanford tally the winning goal in his 40th career playoff game.  The Vernon, B.C. product has 44 points (19G, 25A) in his WHL Playoffs career.