Busy Schedule Gets Rolling in P.A. 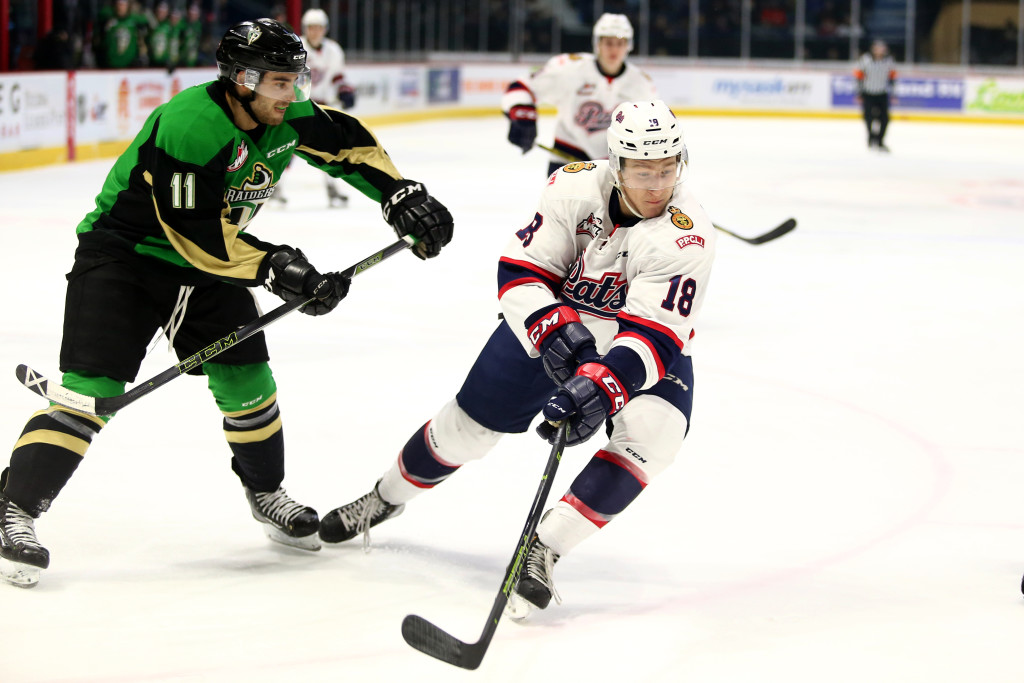 Regina, Saskatchewan – The Regina Pats (22-22-3-4) enter a busy Family Day weekend, opening against the Prince Albert Raiders (30-18-5-1).  It’s the sixth time the teams face off this season with the Pats holding a 1-1-2-1 record against the Raiders.  Their previous meeting saw the Pats grab a 4-2 win on home ice.  Austin Wagner (2G, 5A) and Adam Brooks (1G, 6A) lead the Pats with seven points each against the Raiders.  The Blue and White come in having won two straight and three of four after a 5-3 victory over Prince George on Saturday.   Tonight’s game can be heard on 620 CKRM beginning at 6:35 p.m.  Watch live on Access7/70 or Shaw TV (Saskatchewan) starting at 7 p.m.

Prior to tonight’s contest, the Raiders will retire Dave Manson’s number four to the rafters of the Art Hauser Centre.  Manson is the second player to see his number retired after Mike Modano’s number nine was honoured.  The Pats were in attendance for that ceremony as well.  Both 620 CKRM and Access will carry the ceremony live from Prince Albert.

The Blue and White see two skaters return from injury tonight with Connor Hobbs and Aaron Macklin both jumping back into the lineup.  Their insertion means the Pats will ice a full lineup for the first time in four games.  Hobbs missed seven games with an upper body injury while Macklin was out four games with an upper body injury.  Adam Berg is questionable for the weekend while Colby Williams remains on the shelf indefinitely.

The Pats hope a strong outing from Cole Sanford and Sam Steel on Saturday marks the two getting on a roll offensively.  Sanford put up three points, including two goals, while Steel was named the game’s first star with a goal and an assist.  After being held off the scoresheet in five of seven games, Steel now has points in three straight.  Sanford broke out of a four game pointless streak.  Their linemate, rookie Sean Richards, has points in six of his last eight games.

Adam Brooks’ three assists on Saturday brought his four game point streak total to ten helpers.  With his torrid pace, Brooks reached the 50 assists plateau for the first time in his WHL career on Friday and now averages over an assist per game.  While helping his teammates put up tallies, Brooks hasn’t found the back of the net in a season-high six games.

Saturday’s win over Prince George marked the first time this season the Pats have won on back-to-back nights.  Previously the Blue and White held a 0-5-2-2 record on Saturday after winning the Friday matchup.  It was also the first time goaltender Tyler Brown has captured wins on consecutive nights in his WHL career.  Brown has started seven straight games with a 4-2-0-1 record over that stretch.