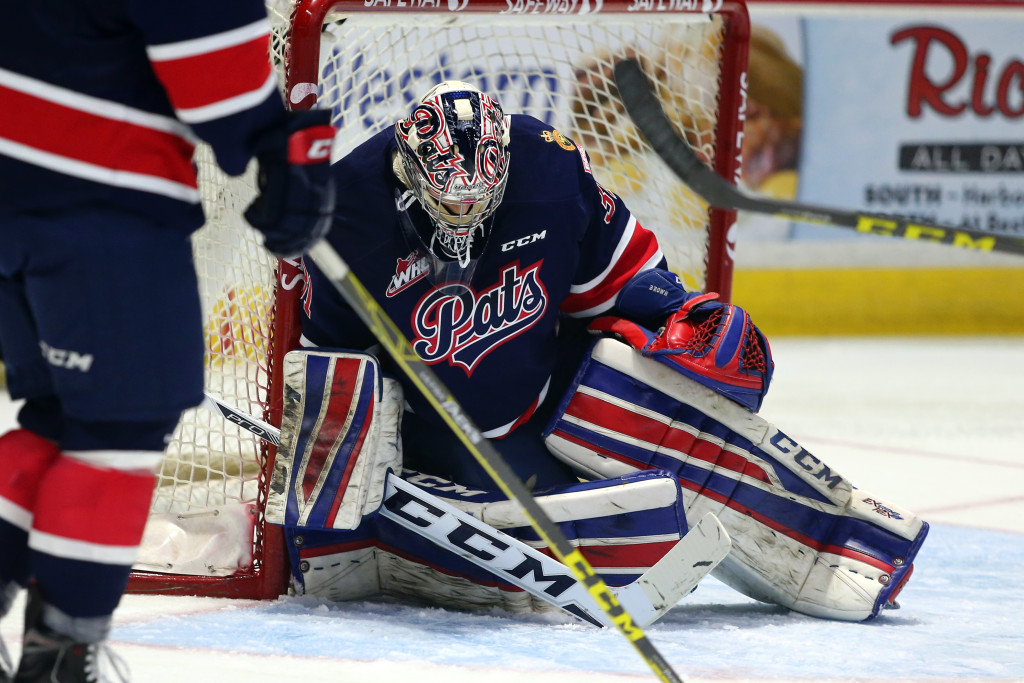 Game Story
After a slow start, the Pats broke out in a big way over a 3:30 span in the opening period.  Rykr Cole opened the scoring when Adam Brooks hit the post on the powerplay and the puck bounced into the goal off Cole’s skate.  Just 2:30 later, Jake Leschyshyn won an offensive zone faceoff back to Brady Pouteau.  The rookie defender launched a slap shot that was tipped by Aaron Macklin in front and past Brock Hamm for a 2-0 Pats lead.  Less than a minute later, Connor Hobbs and Brooks broke into the Saskatoon end.  Hobbs dropped for Brooks who cut across the crease and picked the top corner of the net to put Regina ahead 3-0 through twenty minutes.

Adam Brooks picked up right where he left off in the first.  The Pats’ leading scorer worked himself into some open space to the side of the Saskatoon net before targeting the far side of the goal to extend the lead to 4-0 at the 5:08 mark.  Just 17 seconds later, Colton Kroeker’s shot snuck through Jake Morrissey to push the advantage to 5-0 Pats.  Tyler Brown took care of his business in the second period.  The Blades’ fifth powerplay of the game saw a flurry of action around the Pats’ netminder who made his best save on a wraparound chance that Brown flashed his pad out to take away.  With their goaltender holding strong, the Blue and White took their 5-0 lead to the break.

The Blades best chance of the frame came off a Pats powerplay when a giveaway ended up on the stick of Logan Christensen.  The rookie forward ripped a one timer at the net, but Brown bounced out to the top of the crease to make the save.  The Pats thought they had made it 6-0, but Colton Kroeker’s powerplay marker was rescinded due to goaltender contact.  Neither team found the back of the net in the third and Tyler Brown closed the door on the 5-0 shutout effort.

Quick Hits
– Adam Brooks registered his 10th multi-point game of the season with 3 points (2G, 1A)
– Tyler Brown made 32 saves to record his first career WHL shutout.
– Brown’s shutout was the Pats’ first regular season shutout since February 25, 2014 vs. Lethbridge.
– Game attendance was 3261.

What’s Next?
The Pats hit the home stretch of their nine straight road games starting Friday night in Brandon against the Wheat Kings.  Puck drop goes at 7:30 p.m.  Follow along with Bennett Dunlop Ford Pats Hockey on 620 CKRM starting at 7:05 p.m.