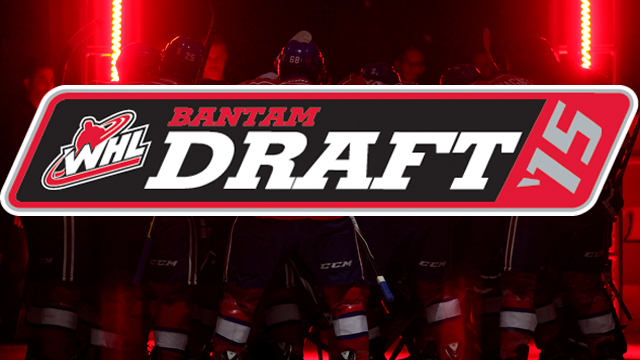 Regina, Saskatchewan –The Regina Pats added six prospects to their organization and completed one trade in rounds six through twelve of the 2015 WHL Bantam Draft.

The eighth round saw the Pats pick twice.  With the 155th overall selection, the Blue and White added forward Mackenzie Belinski from the Yellowhead Chiefs.  Belinski tallied 54 points (29G, 25A) in 31 games in Manitoba Bantam AAA.  With the 168th overall pick, the Pats selected centre Riley Krane from the Okanagan Hockey Academy.  The Dawson Creek, BC native totaled 17 points (8G, 9A) in 18 games.

Before the ninth round got underway, the Pats and Moose Jaw Warriors announced a trade.  The deal sent the rights to forward Rylee Zimmer (’97) to the Warriors in exchange for a conditional 10th round selection in the 2017 WHL Bantam Draft.  Zimmer played in 49 games wearing the Blue and White.

In the ninth round, the Pats picked up another defenceman by selecting Owen Williams with the 190th overall pick.  Hailing from Delta, BC, Williams is no stranger to the prairies after spending last season with the Notre Dame Hounds where he tallied 12 points (5G, 7A) and 46 penalty minutes in 33 games.

The tenth round brought another familiar name into the fold.  The Pats used the 212th overall pick to select goaltender Max Paddock from the Brandon Wheat Kings.  Paddock played in 12 games while compiling a 7-1-2 record to go with a 2.68 GAA and one shutout on the year.  The Brandon, MB native is the nephew of Pats Sr. VP of Hockey Operations and Head Coach John Paddock.

Overall, the Pats added four forwards, four defenceman and one goaltender in the 2015 Bantam Draft.