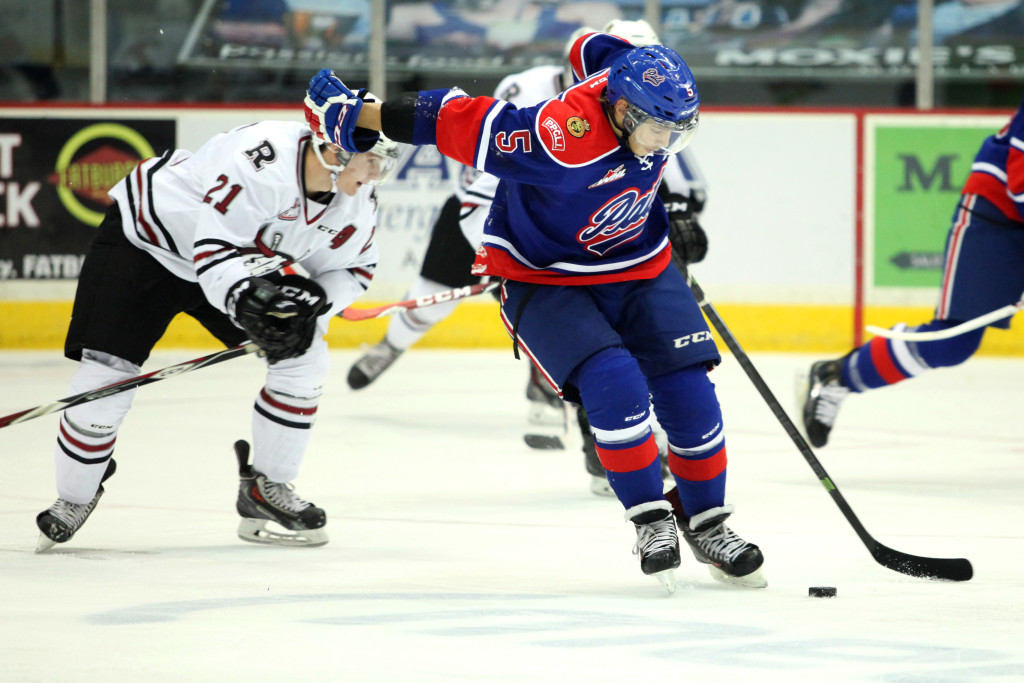 Looking for a bounce back effort after a 6-2 loss in Edmonton the night before, the Pats got off to a good start.  Taylor Cooper wheeled around the zone before firing a wrist shot from the faceoff circle that found its way to the back of the net to open the scoring just 2:02 into the first.  After a time out minutes later, the Rebels turned things around and got on the attack.  They tied up the game on a strange play.  Adam Musil’s shot hit the side of the net and somehow wound up crossing the goal line.  Just over a minute later, the Rebels broke into the Pats end on a two-on-one and, unlike a brilliant stop made by Daniel Wapple earlier in the period, Colton Bobyk was able to send it over the pad for a 2-1 Rebels lead.  That score would stick until the break with the Rebels outshooting the Pats 11-7.

The middle period saw the Rebels extend their lead when Presten Kopeck raced up the ice and fired a shot from the faceoff circle, tucking it inside the far post for a 3-1 advantage 5:29 into the game.  Regina looked to be in trouble when the Rebels went to a belated four minute powerplay off a high-sticking call.  Already three for three on the penalty kill, the Pats got a boost when Austin Wagner sprung Adam Brooks and the Pats’ leading scorer threaded a backhand by Taz Burman to bring the Blue and White back within one, trailing 3-2.  That’s how the score remained at the intermission with Red Deer up 19-12 in shots.

Trailing by one in the third, Daniel Wapple and Sam Steel picked their game up.  The goaltender made multiple ten bell stops for Regina and the rookie drove the Pats’ attack.  Battling free of a check, Steel centered for Taylor Cooper who knocked in his second of the night to tie the game 3-3 with 8:44 left in the contest.  A parade to the penalty box ensued after the tying goal, but neither team could strike with the powerplays and four-on-four time. With sixty minutes done, the count remained 3-3.

Despite plenty of chances in overtime, neither team could find a hero in the extra frame.  The game rolled on into the shootout where the goaltenders put on a show.  Daniel Wapple and Taz Burman successfully turned aside shooters through eight rounds.  In the ninth round, Burman foiled Pavel Padakin and second year forward Adam Musil pulled a great move to win the game for the Rebels, 4-3 in the shootout.

The Pats close out their Alberta road swing tomorrow evening in Calgary where they drop the puck against the Hitmen at 5 p.m. CST.  Catch the action on 620 CKRM and WHL Live Web TV at 4:35 p.m.