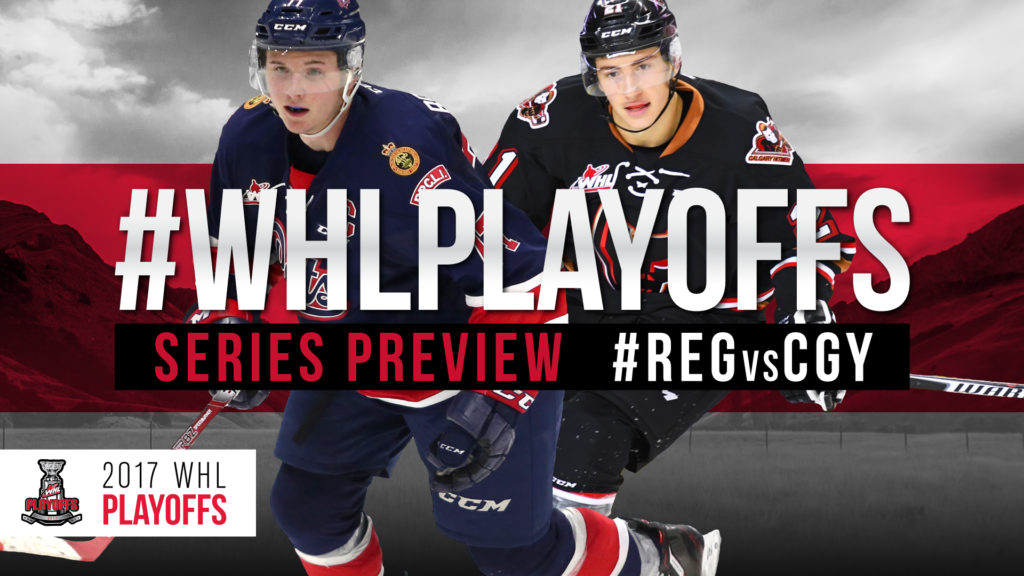 With the 2017 Western Hockey League Playoffs set to begin Friday, March 24, WHL.ca provides a look in at each of the eight head-to-head matchups across the league.

What fans can expect is a general introduction to the two teams, coupled with vital statistics and keys to the series. In our player-specific sections, we will highlight Players to Watch that do not serve as the usual suspects – the best of the supporting cast or perhaps the darkhorse playoff warriors.

Finally, we close each of our series previews with a quick look to the past for a brief historical take on the rivalry that exists – or stands to develop.

In our first of eight opening round playoff previews, we examine the recently-crowned Scotty Munro Memorial Trophy-Champion Regina Pats and the Calgary Hitmen.

In the blue corner, long ranked as one of the top clubs in the entire Canadian Hockey League this season, the high-flying Regina Pats were the first WHL club to reach the 50-win plateau and finished the campaign as holders of the Scotty Munro Memorial Trophy as the WHL Regular Season Champions – only the second time in franchise history the club has achieved such a feat.

Representing the Pats in the heavyweight class are the top two scorers in the entire CHL – Anaheim Ducks prospect Sam Steel and his 131 points just held on to win the nation’s scoring title, beating out teammate and captain Adam Brooks, who hit 130 points himself.

In the red corner, the underdog Calgary Hitmen, who scraped their way into the WHL post-season as the final team to qualify on either side of the bracket, securing the final wild card seed in the Eastern Conference in their 71st game of the tour.

Matteo Gennaro, Jake Bean and Beck Malenstyn provide the punch for Calgary and will need to slug up to the same class as the likes of Steel and Brooks for the Hitmen to have a fighting chance in this first-round best-of-seven series.

But just hold on for one second. This might not turn out to be quite the cakewalk many are expecting.

The Hitmen played the Pats tough through a four-game regular season series, including in the final meeting between the two clubs prior to the playoffs when Calgary scored a critical 6-3 victory in Regina to help create some distance between themselves and the Saskatoon Blades.

So, for all those holding brooms high overhead, you might want to take a minute to further evaluate before you get too carried away. 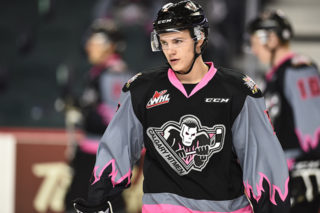 Key to the Series – Regina Pats

Smother Jake Bean: The blue-chip prospect of the NHL’s Carolina Hurricanes plays a vital role in Calgary’s transition game and is a catalyst at the offensive end of the rink. Nip Bean in the bud and chances are good you shut down the Hitmen offensively. Expect to see the smooth-skating blueliner logging a ton of minutes for Calgary.

Key to the Series – Calgary Hitmen

Find a way to get to Tyler Brown early: If the Hitmen can rattle Brown’s confidence early in the equation, they have a shot at running with the high-powered Pats offense. Try as any team may, the Pats offense isn’t an easy one to shut down. Stifle Sam Steel and Adam Brooks is there. Bottle 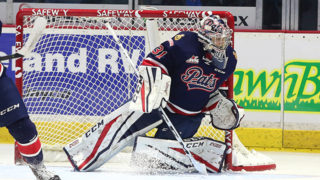 up Brooks, Dawson Leedahl remains dangerous. Leave Leedahl frustrated and Connor Hobbs can burn you from the blueline. Handle Hobbs and Austin Wagner wheels down the wing. On and on it goes – the offensive depth in Regina is ridiculous, so Matteo Gennaro best shoot the puck as often as he can. With an NHL-level release, he left many goalies looking behind themselves this season and he’s going to have to do plenty of that if Calgary hopes to give Regina a run in the first round. 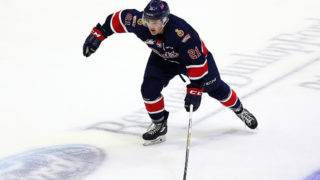 RW Nick Henry (35-46—81): The 17-year-old product of Portage la Prairie, Man., decommitted from NCAA Western Michigan for the chance to
play under John Paddock and boy is that decision paying dividends. The 6-foot, 190-pound winger finished second in the rookie scoring race with 81 points, trailing only Finnish flash Aleksi Heponiemi (28-58—86) of the Swift Current Broncos. The first-year forward was ranked 25th among North Americans skaters in NHL Central Scouting’s midterm rankings and with only so many Hitmen bodies to handle the likes of Steel, Brooks, et al, someone will find so extra space to work with. Chances are good Henry could be that guy. 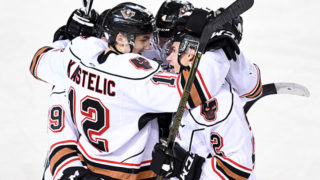 C Mark Kastelic (13-22—35): The 18-year-old product of Scottsdale, Ari., came on strong down the stretch as the Hitmen pursued the final playoff seed in the Eastern Conference, scoring 10 points (3G-7A) in his final eight games of the season. With Gennaro likely to draw the bulk of attention from the Regina defensive core, the 6-foot-3, 205-pound Kastelic will need to maintain his hot conclusion to the regular season. Ranked 133rd among North American skaters by NHL Central Scouting, Kastelic has the size scouts love and with the 2017 NHL Draft fast approaching, there’s no better time than the post-season to show your chops. 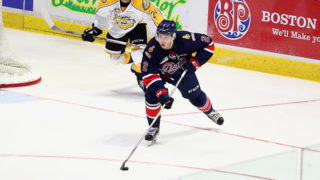 Sergey Zborovskiy (7-33—40): The 19-year-old product of Moscow, Russia, and prospect of the New York Rangers ranked as the top plus-minus player in the entire WHL in 2016-17, logging a plus-72 rating to sit a whopping 20 notches ahead of teammate Austin Wagner, who finished in second at plus-52. On a team that boasts the likes of Connor Hobbs and Josh Mahura, among others, Zborovskiy quietly takes care of both ends of the rink and provides a well-rounded presence for coach John Paddock. Standing 6-foot-4 and weighing in at 195 pounds, he doesn’t leave much room for opposing forwards to work with and the Hitmen will need to find a way to get past him if they have any hope of finding the back of the net. 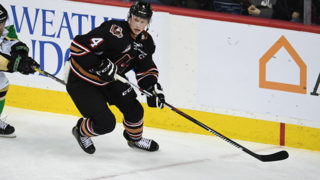 Micheal Zipp (4-22—26): There’s a reason this guy is the captain of this team and it’s because he plays with the kind of heart and soul required to win when the stakes are highest. If Zipp hopes to extend his final campaign in WHL, he’s going to need to provide an added spark – in one form or another – from the Calgary blueline. Jake Bean and Brady Reagan will undoubtedly have their hands full and Zipp won’t get off easy either. The 20-year-old product of Edmonton has always brought an infectious and palpable energy every time he steps on the ice. If there ever was a time to kick that up another notch, that time is now.

Tyler Brown (50 GP, 33-8-5-1, 2.64 GAA, .911 SV%, 5 SO): The 19-year-old product of Winnipeg had plenty of critics through the 2016-17, with many pundits going as far as to suggest the Pats should be looking for an alternative option between the pipes prior to the passing of the WHL Trade Deadline. Well, Jan. 10 came to pass and since then, Brown has been nothing short of excellent. He highlighted his second half resurgence with WHL Goaltender of the Week honours for the week ending March 12. When the WHL campaign came to a close Sunday evening, he ranked among the league leaders in GAA (fourth), wins (fourth) and shutouts (T-2nd). 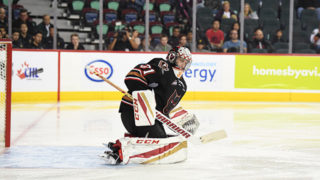 Cody Porter (34 GP, 14-16-2-1, 3.46 GAA, .888 SV%): The 19-year-old product of North Vancouver went two full months without seeing game action as he recuperated from what could be characterized as a complicated shoulder injury… or injuries. Back in Regina on Jan. 6, the veteran puck-stopper suffered essentially seven injuries all in one unfortunate play – a third-degree separated shoulder, a third-degree dislocated shoulder, a third-degree broken collar bone, a torn labrum, a torn AC joint, a torn rotator cuff and a torn Bankart lesion. Recovery from a standard rotator cuff repair alone can take up to six months. Porter was back within two months after dedicating himself to an accelerated and aggressive rehab. With Trevor Martin – who was Porter’s emergency replacement – down and out due to a lower-body injury of his own, the plucky Porter is back in the blue paint and already writing a feel-good story.

In the 2016 WHL Playoffs, the upstart Pats shocked the Central Division-champion Lethbridge Hurricanes, skating to a five-game series win in the first round before eventually bowing out in a seven-game loss to the Red Deer Rebels in the second round. It was a simple sign of what head coach John Paddock was building in the Queen City and his master plan has come to fruition in fiery fashion this season.

Canada’s oldest major junior hockey team owns two WHL Championship titles – 1974 and 1980. Regina also won the Memorial Cup in 1974. That 1974 WHL Championship victory – it just happened to come against the Calgary Centennials. While the Cents don’t fall in the same franchise bloodline as the Hitmen, there’s no denying their place in Calgary’s WHL history.

Set to host the CHL’s 100th Memorial Cup festivities in 2018, will the Pats provide themselves an opportunity to defend on home ice by winning it all in 2017?

In the 2016 WHL Playoffs, the Hitmen made an unusually quick exit from the proceedings, losing to the Memorial Cup-host Red Deer Rebels in a five-game first-round series. The Hitmen are only two years removed from a trip to the Eastern Conference final, which resulted in a 4-1 loss to the Brandon Wheat Kings. That being said, this Hitmen team has a very different look from the one that advanced to the final four back in 2015.