TRADE: Pats get Gabrielle and Harkins in trade with Prince George

The Regina Pats Hockey Club is pleased to announce they have acquired Boston Bruins prospect forward Jesse Gabrielle and defenceman Jonas Harkins from the Prince George Cougars. In exchange, the Pats send prospects Kjell Kjemhus and Ethan McColm to the Cougars along with third and fifth round picks in the 2018 WHL Bantam Draft.

Garielle (5’11, 205), has been playing the first half of the season in the American Hockey League with the Providence Bruins. The 20-year-old has put up a goal and three assists in his first 21 games as a pro. The product of Moosomin, Saskatchewan played the previous two seasons with the Cougars, scoring 75 goals and adding 64 assists for 139 points in 133 games.

“We are really excited to add a scorer of Gabrielle’s caliber,” said Pats Head Coach and GM John Paddock. “He had a really productive last two seasons in the WHL and now brings some experience at the pro level to our team.”

Gabrielle was a member of the Pats for the second half of the 2014-15 season where he had 10 goals and 19 points in 33 games and added another goal and three assists in nine playoff games with Regina.

Harkins (6’3, 225), is playing in his 17-year-old season in the WHL. He was a second round pick of the Cougars in 2015 and has one assist in 14 games this year. He is the younger brother to Jansen Harkins who tallied 242 points in 275 games in the WHL, all with Prince George, and is currently playing in the Winnipeg Jets farm system.

“Harkins is a promising young defenceman,” said Paddock. “He will add depth to our back end this year and in the years to come.”

Kjemhus is a product of Grande Prairie, Alberta and is playing in his 16-year-old season. He was drafted by the Pats in the fourth round of the 2016 WHL Bantam Draft. Kjemhus has appeared in six regular season games with the Pats and also 13 playoff games in 2017 where he picked up one assist.

15-year-old McColm was drafted by the Pats in the eighth round of the 2017 WHL Bantam Draft. The Oakbank, Manitoba product is playing with the Eastman Selects this season and has six goals and 20 points in 21 games.

The Pats are back in action on Saturday night when they visit the Swift Current Broncos at 7 p.m. on 620 CKRM. Next home game is Sunday against Prince Albert at 4 p.m. Tickets are available at reginapats.com and the Brandt Centre Box Office. 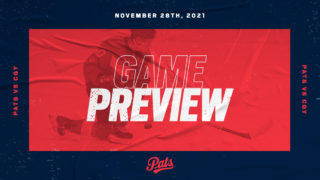