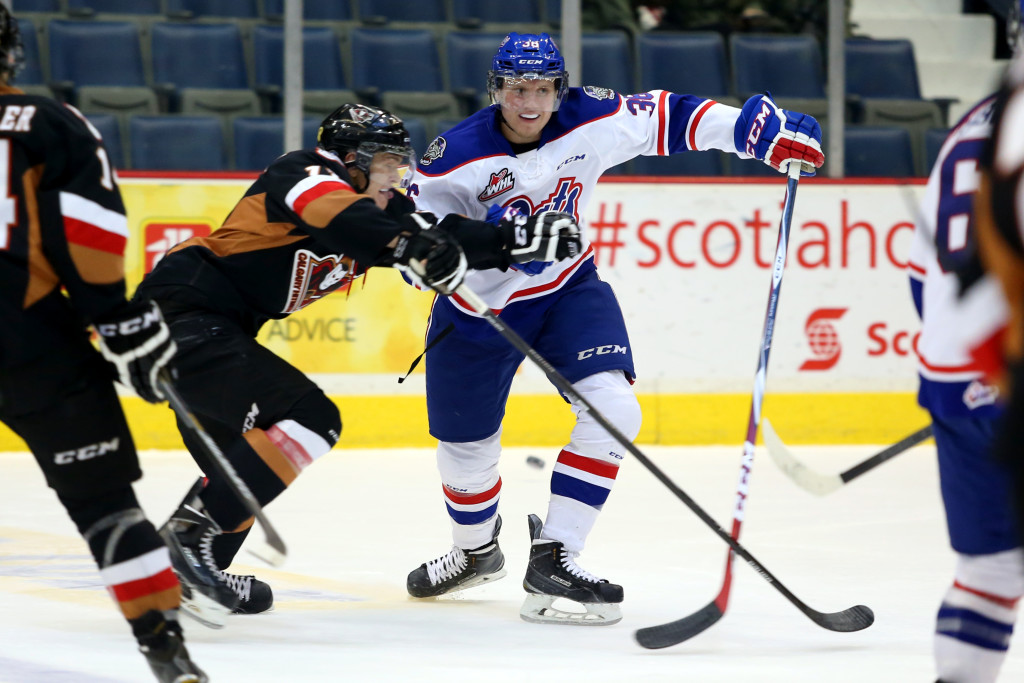 Regina, Saskatchewan – The Regina Pats (26-16-2-2) wrapped up their four game in five night Alberta road swing against the Calgary Hitmen (24-17-1-4) and fell 5-2 to the hosts on a night when the Hitmen honoured Reginan Ryan Getzlaf.

Looking to finish their road swing about the .500 mark, the Pats got off to a strong start when Austin Wagner fooled Mack Shields with a wrist shot to open the scoring.  Call-up forward Adam Berg picked up the second assist on the goal for his first WHL point coming in his hometown.  It didn’t take long, just over a minute, for the Hitmen to tie.  Off a turnover in the Pats end, Adam Tambellini moved into the slot and beat Daniel Wapple five-hole for a 1-1 draw at the 7:23 mark.  That score held until the break despite the Pats outshooting the Hitmen 16-6 in the frame.

The Blue and White continued that pressure into the middle period, but the Hitmen would take the lead.  Off a clean faceoff win in the Pats’ zone, Keegin Kanzig let fly a seeing-eye wrister that went in off the post just shy of six minutes into the period.  Tambellini struck again in the second when he out battled a pair of Pats defenders in front to knock in a bouncing puck.  43 seconds later, Tambellini completed the hat-trick when he grabbed a rebound on the powerplay and slid it around Wapple for a 4-1 Hitmen advantage after the second.  The Pats still led in the shot count, 23-17, after forty minutes.

Trying to chip away at the Calgary lead, the Pats powerplay converted three minutes into the final stanza.  A scrum in the crease loosed the puck just enough for Braden Christoffer to lift the loose disc over Shields and into the goal, cutting the score to 4-2.  The Blue and White just about made it a one goal game while on the penalty kill as Wagner raced away shorthanded, but fired high on his breakaway attempt.  The Hitmen restored the three goal lead when Connor Rankin glided in on a 2-on-1 before pulling the puck below the goal-line, then back out in front and round the post for the goal 11:23 into the period.  Back on the powerplay with just over four minutes left, the Queen City Kids pulled Wapple for the extra attacker.  The gambit generated some scoring chances, but no goals and the score found its final at a 5-2 Hitmen win despite the Pats outshooting Calgary 33-24.

The Pats get some much needed downtime before their next game Friday, January 23rd at the Brandt Centre against the Moose Jaw Warriors.  Tickets are limited for the game, but are available at Safeway locations throughout Regina and a few seats remain through Ticketmaster.ca.